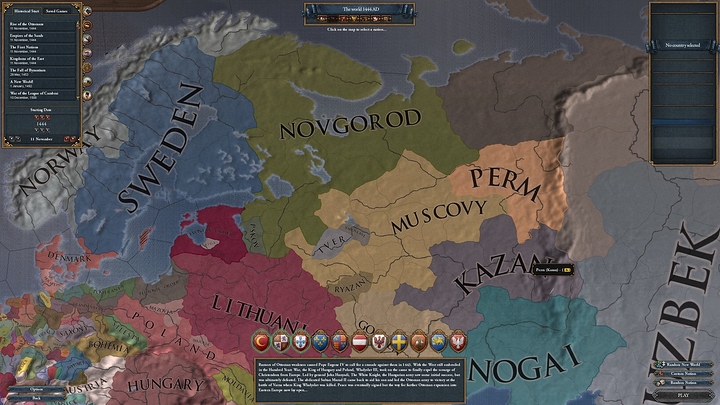 Started an early war against Novgorod, needless to say it was a slaughter, this gives me a nice boost at the start of the game. 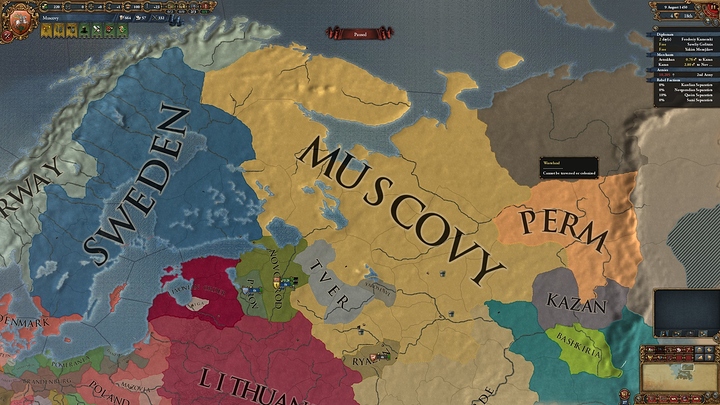 Allied with Sweden and promised to support their independence from Denmark. (No real plans to aid them whatsoever). 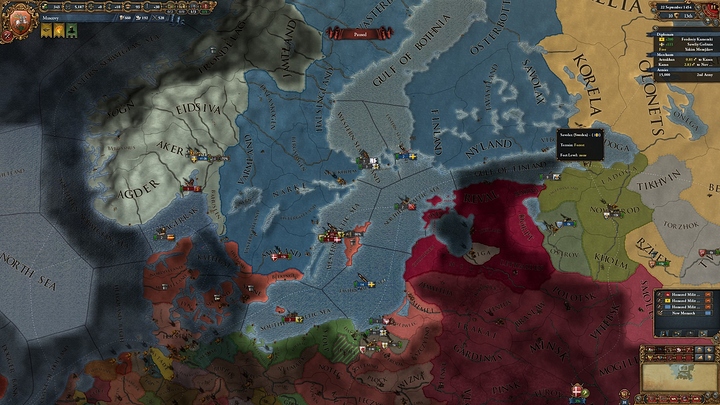 Holy shit Sweden actually fucking did it. Those glorious bastards. (I did offer support by holding Skane to prevent Denmark from re-enforcing)

Gained a powerful ally at my back and also pooped on Denmark. 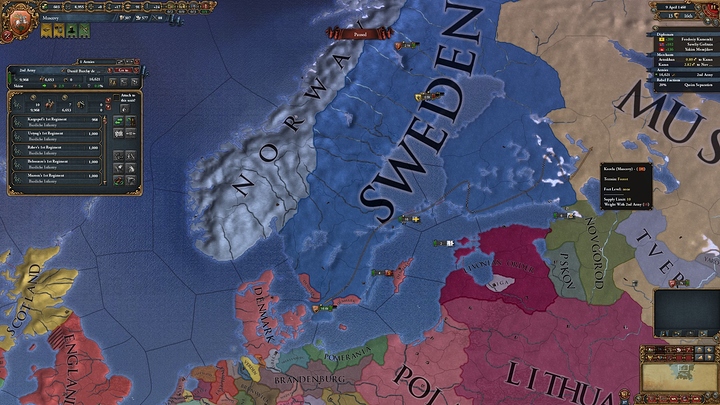 Well, it didn't feel good, but it had to be done. Whiped Tver off the map and annexed Yaroslavl. Sometimes you just have to crack a few eggs to make an omelet... 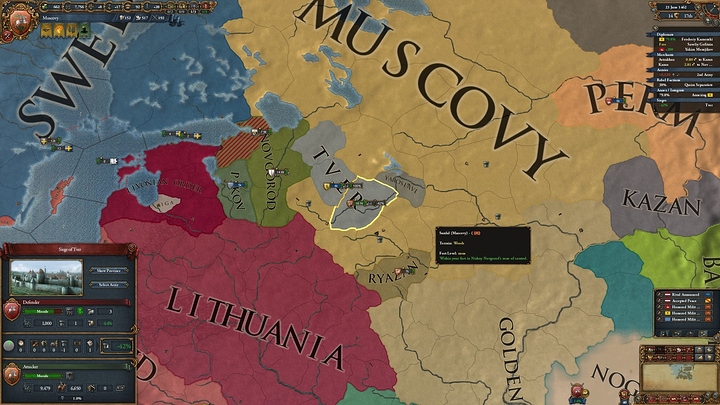 Also, Novgorod got totally fucked by the Livonian Order. lmfao 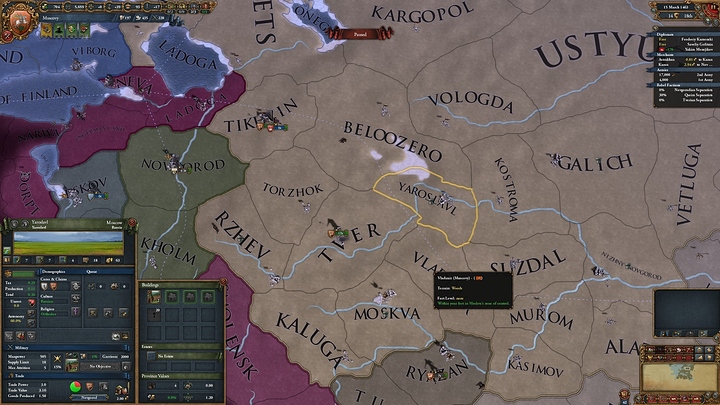 Well, after a long, and bloody, war with the damn Golden Horde we ended up reaching a white peace. Although the war did hurt my economy it also hurt theirs. It will be a race to rebuild and prepare for a followup war in coming years.

Also, the damn peasants saw a comet and are losing their little minds... Ugh, these are dark times for Muscovy.... 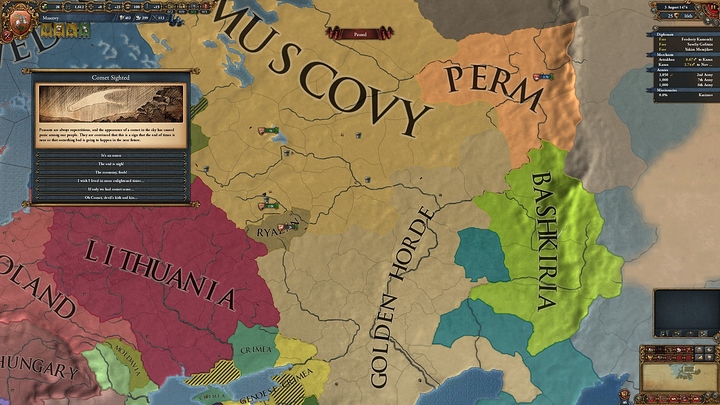 Sweden is in another war with Denmark and things aren't looking good, hopefully they will come out victorious. 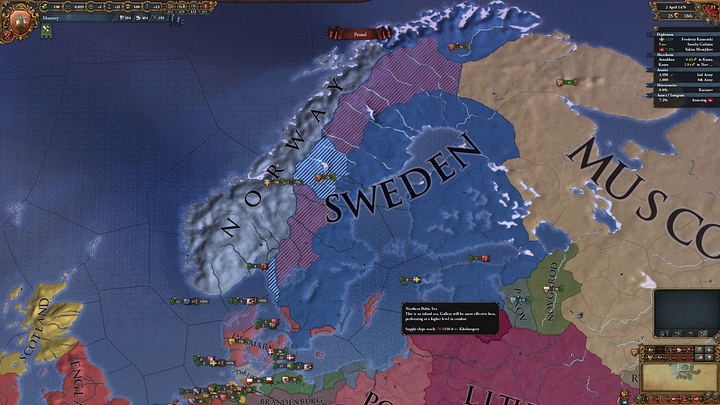 I'm in the process of annexing Perm, that should give my economy a decent kick and supply more manpower. 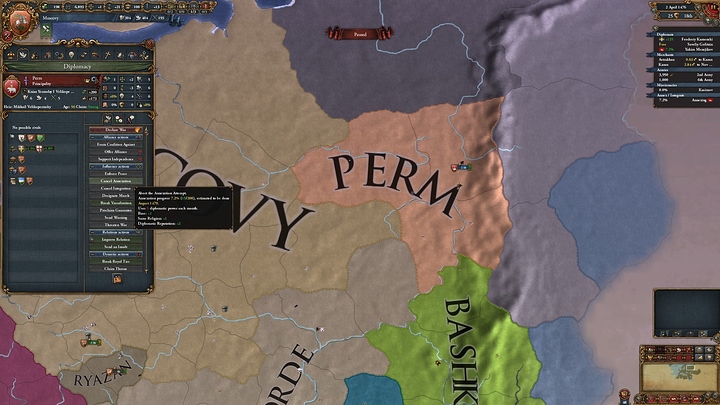 Novgorod is looking mighty vulnerable though, and I will complete a mission if I conquer them, it will also be another objective completed toward forming Russia... THERE WILL BE BLOOD! 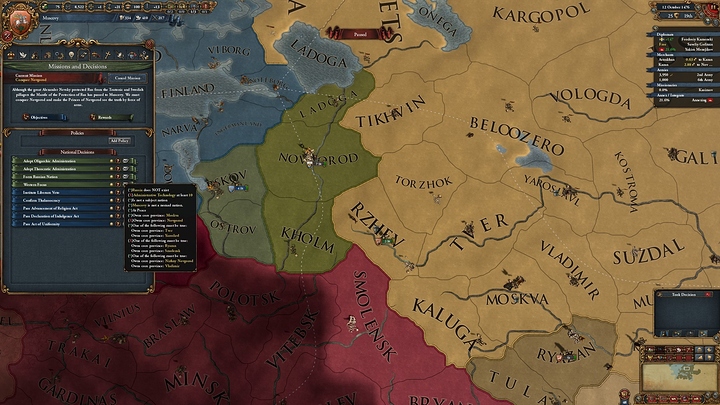 Well, the annexation of Perm is complete and the war against Novgorod was successful. This gives me hope for the future and brings Muscovy out of its depression.

Sweden won their war against Denmark, and got quite a bit of land out of it. I'm so proud of Sweden, I knew supporting their independence would be worth it. 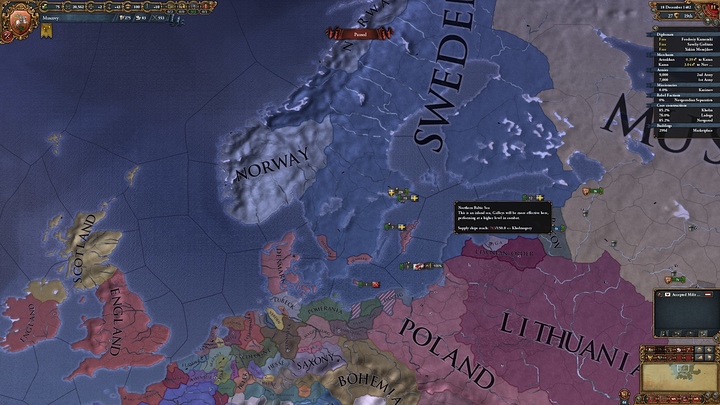 The bad news is that now the Uzbek have declared me as their new rival (likely a result of my war against their allies the Golden Horde. This will mean war in the future, and the Uzbek are a brutal horde to fight. 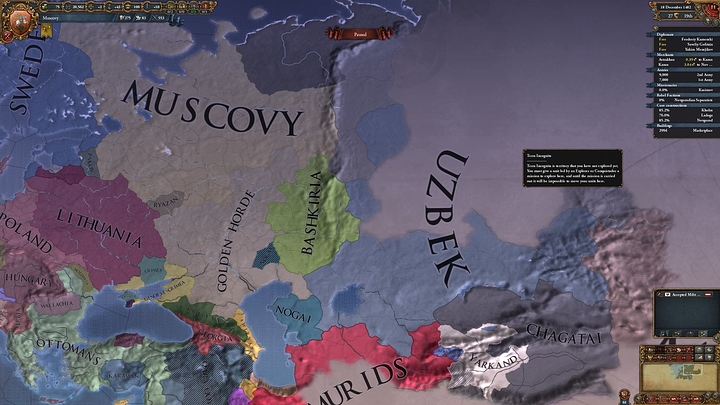 Why are you not playing Stardew Valley? You could conquer the world fast enough by introducing people to that.

That is impressive. I've always been intimated by the EU series. I respect them but I'm afraid if I started to play I would never stop.

It is a rather complex game, almost like the Dark Souls of strategy games. But I have a special place in my heart for grand strategy games. This game is built really week, I enjoy all the games that Paradox makes.

we'll you are about to get knocked down few notches when you attack more developed western countries; and ultimately its a bad choice to liberate Sweden - they will want Finland and will rape you together with west.

What you should do is chip away on Lithuania and consolidate your power to east. You need to be ruthless here.
If you allow Lithuania stay like that they will create a personal union with poland... and kick your ass together with Austria.

so yeah you need to annex golden horde as fast as possible. Also I would stab Sweden in back while it gets assulted is at war with other country take st. petersburg its very important.

Thanks for the advice, I'm still new to this game so I've been learning every step of the way. My biggest issue with the game is I feel like I'm always fighting wars on multiple fronts, which really sucks. Dealing with the Golden Horde will be difficult because they have a few really powerful allies. I would like to invade Lithuania but I think I have to deal with the Golden Horde first.

I'll try to bait Sweden into going to war with somebody and I'll sweep in while they are weak.

bait Sweden to war with Lithuania; simply declare war with Lithuania and step away only defend. Allowing Sweden to partake. Then when war is at the end - sign peace, and attack Sweden...
(before you do so, stock up on administration as you will loose stability.)

you need to attack while their manpower reserves are low, while your are high. (also you should keep 10-25% of your force from mercs it helps to deal with manpower)

and note, 40 of your army will be defeated by 20 of poles. (so careful with west you don't want austrians or swedes kicking your shit up...)

also look at golden horde's alliances - it might be better to attack one of their allies who doesn't have great allies. Then you will be able to kick the living sh*t out of horde.

Will do, although I have to say, all the backstabbing does feel pretty messed up. lol

How do you think I should deal with the golden horde? What's the best approach? Defensive war?

I'll take a look at their allies.

depends whom they are allied with, the more you go east the bigger and weaker armies you get. They are great at beginning but in mid game they fall off.

Gotcha, when I was at war with them I probably killed thousands but they just kept coming and coming. Neither one of us could really get a foothold on the other. I have teched up a bit since then so it will probably go differently next time. They are allied with Uzbek though, which is a huge, scary, nation. Although in my last war the Uzbek didn't seem too interested they kinda poked around and left early.

and yeah you should annex ryzan as fast as possible too, its a waste of dip if you keep them as your vassal or have alliance etc.

They are a vassal of the Golden Horde actually, they hate me, IIRC the only vassal I have left is Pskov. I annexed all the rest.

how do you build your armies?

note as eastern tech group your cav is more powerful.

It started as alot of infantry, but I noticed soon after that my cav was pretty strong, so I started adding more. I don't remember the exact count.

also lower maintenance when you are not at war, it will help with gold.
(usually i lower it to minimum when not at war.)

Yeah I've been doing that. I would get an advisor but I only have like 8 gold income. I could afford one while at peace but not at war.

you need to start updating your provinces, especially Moscow administration it will get you more taxes.
you need advisers, take loans if you have to. (take admin advisers that promise more gold - trade efficiency, taxes etc)

do you have a trader? For the moment make him collect on node that you have highest power/possible income. Most likely st petersburg (thats the reason why its important to have)

once i get home today i'll post few things you should pay attention too - it might help you big time in gold income.