I recently purchased some new and re-used hardware for a VMware server build and ran into problems where the machine will not boot.

The hardware is as follows:

When I press the power button, the fans come on, and on the screen it shows “CPU DXE Initialized - 61”, and the server remains at that point indefinitely. On the Dr Debug LED, it says “06”.

When I plug in the IPMI management port, the activity lights on the NIC light up, but I’m not seeing that IPMI is reaching out to DHCP and asking for an IP address.

I opened a ticket with Asrock Rack Support, and they’re asking what server the CPU was taken from, wondering whether the CPU is potentially vendor-locked. I’ve messaged the eBay reseller to confirm, but within their description, they said " Not Dell / HP Locked". There was 17x of the same CPUs sold to others, and no one else has complained.

Any ideas on what else this could be?

Well, to start I’ll say eBay is shit with it’s feedback. My negative feedback from buying a dead titan Xm that was advertised as used, got removed. I got a refund, but still bullshit. I would expect IPMI to work even without a CPU. I’d be suspecting motherboard, but never know, could be wrong.

Note the IPMI interface takes about 5 minutes to boot (unfortunately not exaggerating), so make sure you give it some time on the DHCP requests. It runs from +5VSB and is independent of the other components being present/powered.

Other usual suspects to try for the boot phase: RAM (single stick, different slots), and verify all the power connectors are fully seated. A functioning IPMI would also get you the ability to update BIOS.

When I press the power button, the fans come on, and on the screen it shows “CPU DXE Initialized - 61”

Have you reset the CMOS?
It should also reset the IPMI settings to DHCP

Have you tried to direct connect to the IPMI network port and run a tcpdump while power cycling the board to make sure not even a broadcast/arp request is sent?

OK. So after a bit of troubleshooting with help from AsRock Support, we determined the issue was related to the rear UID LED button. It was wedged to the side of the IO shield and slightly depressed.

No matter how I moved the mobo around in the chassis, the UID LED button kept hitting the side of the IO shield punch-out, so I drilled the hole slightly bigger, and the problem went away.

Now on to the next problem. The Supermicro 64GB 6Gbps MLC SATA DOM Drive w/ Connector, SSD-DM064-PHI SATA DOM will not be recognised, even with the jumpers set to 1&2.

Now on to the next problem. The Supermicro 64GB 6Gbps MLC SATA DOM Drive w/ Connector, SSD-DM064-PHI SATA DOM will not be recognised, even with the jumpers set to 1&2.

Did you connect the 5V power to it? 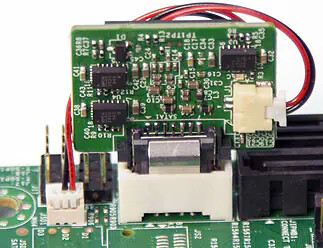 From what I see, there isn’t a compatible port on the mobo to plug the 5V cable into. Or am I just missing it?

It’s a supermicro specific board, it’s not a standard thing. You will need to make a cable up to feed it 5V on that connector.

I ended up just populating one of the HD slots with an SSD and called it a day. Unless I’m mistaken, it is basically the same thing as a SATA DOM.

Suppose to be some ultra reliable thing with less cables… supposedly.

I bought one of those little ssds a while ago, I ended up settling on an adapter to power it off of a USB header.

That’s an awesome idea! It wouldn’t work for the Asrock Rack EPYCD8-2T motherboard, though. The orientation of the SATA port butts the SATA DOM 5V power connector up against the IO shield. There literally no allowance.

So unless you use a SATA cable (as an extension) + the 5V adapter, you basically can’t get the Supermicro SATA DOM to work. And if you’re willing to go that far, you’re basically approaching the point where you’re asking yourself, “why not just use an SSD?”

I suggested to AsRock Support that they put together a list of supported/certified SATA DOMs. After all, there is only one SATA port on the board, so it is pretty obvious this is meant to be for a bootable drive/SATA DOM.

Good idea, however my only concern with this is that USB port power can be turned off by both an over-current condition and/or software. I doubt it would be much of an issue though, just something to be aware of.

I’m always the most concerned about getting the polarity flipped.

You could stick a protection diode on one of the leads, a 1N4001 should do it.