Electrically noisy computer, what to do?

I have this mini pc which I want to connect the analog audio output to the zone 2 on a reciever. When I do I get a lot of noise out of all speakers connected to the receiver (not just the zone 2 speakers). I’ve ordered a display port to hdmi adapter to see if I can use digital audio instead, and hopefully the cable won’t conduct the electrical noise in to the reciever as well.

But I would like to get rid of this noise altogether if possible. Does anyone have any ideas? I’m going to try running a wire from the chassis to something which is grounded and see if that helps as the pc uses an external power brick so it could be a grounding issue.

You could try using a Ferrite Noise Suppressor. Something like this: 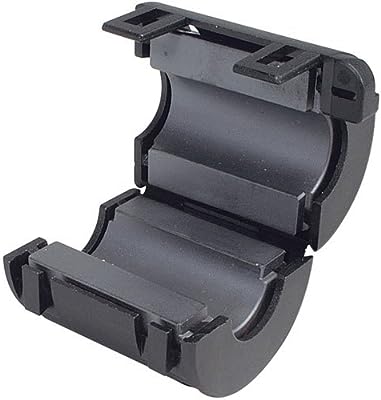 Some people use USB souncards, some folks use a raspberry pi with /jack/ to send audio over the network (typical wired ethernet adds less than a millisecond of audio latency, imperceptible to humans).

Jack is a good idea, I can probably hack something together temporarily until the display port adapter gets here. I’m pretty sure this is a ground issue rather then an emf interference issue. It’s definitely a digital signal of some kind, so I’ll try grounding the chassis or a different wall socket.

both are good ideas

If it’s a fairly consistent hum type noise then a ground loop isolator might help: https://www.amazon.com/AUKEY-Ground-Isolator-Systems-Included/dp/B01L1NP7YI/

It’s more a high frequency digital signal that changes depending on what the computer is doing. I tried grounding it which helped a little but not enough. And predictably, randomly poking it with a grounded wire resulted in almost blowing it up. Anyway, seems the problem is some combination of bad grounding and a garbage motherboard (I bought this computer for $100), so I think using digital audio is going to be the best solution so long ad the noise isn’t transferred in to the reciever.

If it’s a fairly consistent hum type noise then a ground loop isolator might help: https://www.amazon.com/AUKEY-Ground-Isolator-Systems-Included/dp/B01L1NP7YI/

If anyone is interested (or has a similar problem) this solved it. I tried using digital audio over HDMI but it seemed to make my receiver buggy. I haven’t fully tested that this was the cause but so far since unplugging it everything is working properly.

Anyway, using the ground loop ioslator completely eliminated the noise from the signal.