After the whole windows 10 thing with the auto torrenting and spying and such I wanted to try linux out. I'm a long time windows user , basically forever.

My experience is thus:

I tried both ubuntu and mint. The biggest issue I had was trying to install programs. I get that they have a sort of application type program where you search for what you want and they basically auto install. this was fine for installing like firefox or vlc. However many programs aren't there that I want. While there may be a linux version of what I want , installing it turned out to be the biggest issue.

It wasn't what I was used to (having an exe that automatically installs the program). Many times it required a lot of commands to be entered. And these commands were the biggest issue. They never worked....

Yes I read them carefully and typed them exactly correct making sure my directories matched my own machine. And they would still not work , nothing would get installed , nothing would give me confirmation that the command was correct/incorrect ect...

Whats worse , I would be entering commands that obviously delt with sensitive files that the OS needs to run. and sometimes my commands would prevent the machine from booting. and since I'm a linux noob , I have no idea what went wrong , no idea how to fix it , so I would have to reinstall the OS again.

I SHOULDN'T be able to cripple the os by trying to install a linux version of a very simple program , simply because it wasn't in their app selection manager thing. AND I DEFINITELY shouldn't have to type commands into a prompt to do things.

I want linux to work. It's a great os there's nothing wrong with it.

That being said , If I ever just need an os to browse the web/watch movies/manage files and do essentially everything my phone does , I can use it for that. Because I can't get past anything basic without messing it up.

Honestly what you should of done is get a cheap laptop and strictly run Linux and try to work with it on your spare time and not when you need to get work done. there is too much non-sense in the backend for it to be ready for the masses, and it is really time consuming to get stuff working.. but it is a necessity to learn as you get more and more in-tuned with tech.

Also you have to understand, Linux is NOT Windows.. Everything you do in Windows is NOT how you do things in a Linux environment. However i think for most people you learn much better with trial and error as apposed to reading a book telling you what to do. i will say this; don't just throw in the towel just yet. KEEP GOING. just not when you're busy. work on it in your spare time when you aren't doing anything. keep trying to mess with it. most people that have been successful were successful not cause they were just successful. everyone struggles. and you'll later feel accomplished when people come to YOU for help.

Yeah you just need saddle time, just like anything you do the more you do it, the easier it becomes ... Or at least it's easier to understand what's going on. Your best bet is to tinker on old hardware or a virtual machine for a bit until you feel comfortable enough to be fully submerged in the linux environment.

You did the right thing by reaching out to the community though ... Do the next right thing and start frequenting the linux forums, pop into the Live Help Chat IRC and ask questions, the guys that are there LIVE for that shit and they wouldnt be there otherwise.

been using linux as daily driver for upwards of 8 years, still brick systems and reinstall all in a weekends work

It's all part of the learning experience.

This WAS on a spare machine. I dare not touch my actual machine I use to get stuff done. lol

I fully understand it will be different from windows. but...... it's 2015 and I'm typing commands into a command prompt. I GET IT , it needs some commands to do things. but I mean....

But I have to install things with a command prompt...... I mean comon! Everything else was so simple and easy and great and streamlined.

The command prompt is one of those things that you hate, until you love it. Once you start becoming used to using it for everyday commands, you'll wonder why in the hell people use GUI for anything. It can take 12 clicks and navigating 12 menus to do something you can do with ONE SINGLE manual command.

The only reason why you would need to use the terminal for installing packages is if they aren't listed in the ubuntu software servers. Realistically 90% of what you need to install can be installed through software center or programs like synaptic package manager with a better search function than ubuntu's prepackaged software center.

The CLI (Command Line Interface) is arguably the most used utensil in Linux that scares new users away. so it's not surprising. I have mixed feelings with it as well. I feel like every thing should be done from the GUI. and let advanced users fiddle the CLI. but the way things are that's never going to change. however i think for most, people get used to it. it appears convoluted but it's not. the difficulty of linux is learning the Syntax of the command line and what commands do. once you get some if down. things are much easier to understand.

If I give you a hammer, if you didn't know what a hammer is and what it's used for you'd probably think it's useless. but if you know what it does, you'll have an easier time understanding what do with it. same thing as Linux. if you don't know some of the commands are and what they do, you're going to get nowhere.

The "problem" is, that linux is actually a command-line OS, and all the nice and colourful stuff we see is on top of it.
As for installing programs "sudo apt-get install THE STUFF YOU WANT" is not tooooo complicated ^^

And, there is actually the softwarecenter in ubuntu and most other distros have that as well: 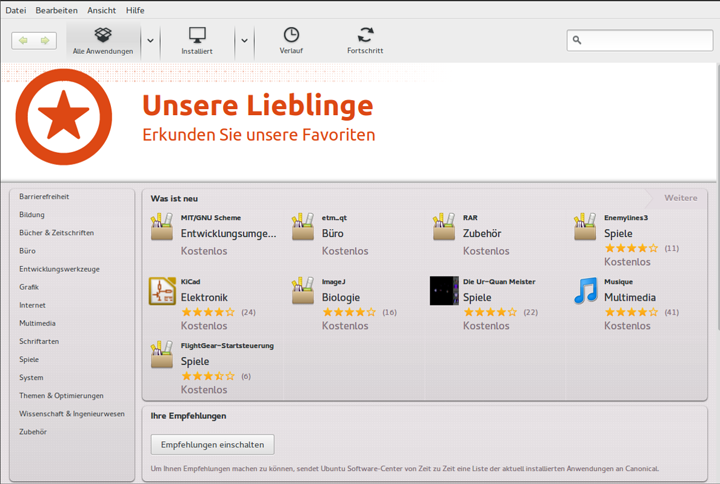 And my best bet, as you dislike the commandline that much: try OpenSUSE!

I SHOULDN'T be able to cripple the os

This is just the reality of root access (with the exception of the newest OS X which has a decent new security model).

If you want to get work done comfortably, it's Windows or OS X*.

there's nothing wrong with it.

except for all the usability problems you listed

If an operating system requires using a terminal to use, it is not ready for normal users. Linux is for servers and developers. If you want a decent desktop linux experience, you have only one choice, ChromeOS :P (based on gentoo).

I started off like this, just over a year ago, trying to get around using the terminal to make things happen on the computer. Then I realized that having the keyboard there made it so much more powerful. Instead of digging through three or four levels of GUI programs to get something done, I just typed in the words instead. Now I get annoyed when I don't know how to do something in terminal, and have to resort to the GUI. It'll come to you eventually.

Id love an example of some of the things you were looking to install but were having trouble with, it would give more context and maybe we can say exactly what the problem was.

I know guys I know. I was just hoping linux was better in every way then windows.

I don't mind typing commands to do very complicated things , like windows networking problems or whatever. But I just don't want to type commands for simple things.

If linux was a hammer it would require me to type the correct command in or it would disappear.... lol , I'm kidding of course , but I understand where you are coming from. :)

Honestly, this is something that needs to be addressed by the linux community. Everyone is used to using computers at this point. If they want more people to use linux, then they need to focus on conversions. Macs and Windows both use GUIs almost exclusively. If they want peopel to come over to linux from Windows, then they are going to need better gui support. Period.

You need to do some research before jumping in.

I think i was trying to just install some games. The games that were in the software center were really not like actual popular titles.

Your best bet for installing games in linux outside of the software repos is to get Steam, and play around with those games. Tinkering with WINE or PlayOnLinux is fun and often effective, however it can be very confusing to get each and every game running the way it should.

I think it was just some normal titles that supported linux and a couple utilities like speedfan or something along those lines. I don't remember exactly which ones caused which issues.

But they all came with instructions on how to install them on linux.

Well how much research am I supposed to do before jumping in?

My research consisted of testimonies from linux users that it's good , asking which distro is best for a first time user , then installing them and trying it on a spare machine. Is this not enough research? Should I have learned all the commands before even installing or trying it? At what point do I "jump in"

Considering one guy here said he uses linux daily for 8 years and sometimes still bricks the OS , should I wait 9 years then?

(sorry to others but this comment just sorta ... ughhhhhhhh)