Earbuds, output picked up via mic?

For the first time ever im using personal audio rather than my speaker setup for gaming, but am having issues.
Im using my daily music drivers, Sennheiser CX 5.00, for gaming and mic via my laptop. The issue is, the mic seems to pick up some of the earbud output? 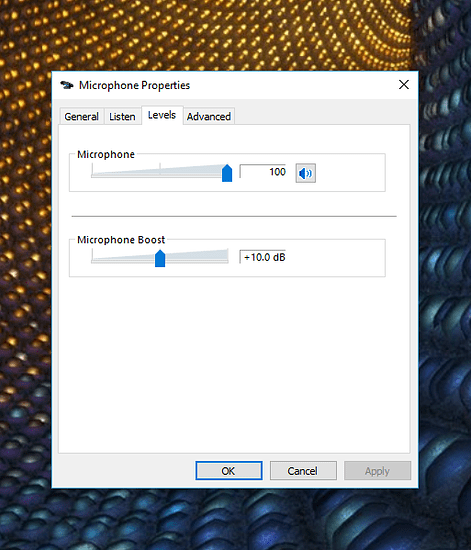 So I have the audio in game set to 60%, and using voice recorder in game (without listen to this device) (mic boost @ 10dB) it picks up the games audio maybe 30%.

Could this be drivers, or crosstalk in the cable, or the socket, or vibration from the ear bud reaching the mic? Or maybe I dont need any boost?

This is my first use of mic in game other than my laptops, so have no idea about these things?

I know that my Thinkpad T450s does this as well, there’s some crosstalk in the 3.5mm jack on the laptop and when I plug into the dock instead the issue goes away.

Thanks man. I might get myself a USB soundcard then

Depending on budget, Yamaha AG03 does basically everything.

Dollar dollar is fine. Its more about the continents and practicality. And it would be yet another thing on the desk, that im only going to use for 1 maybe 2 games.
Looks like line in and out are split, so would need an adapter. Its only a 3.5mm.

But this is the sorta thing I want yeah?

It does DAC and ADC things (it is an audio interface). There are cheaper options (and more expensive ones).

Nice. my googles before your post led me to some Sennheiser GSX1000’s. But this is cheaper and looks to do the job just fine.

One question though. These all come with a mic and output port seperate. If I get an adapter for these to be combined into a 3.5mm 4 pole female. Will I just be putting myself into crosstalk issues?

I tried a 3dGame1 last night, and minus the Dolby stuff, the sound was considerable better than the laptops. So I will be picking something up, and the Yamaha looks promising.

If I get an adapter for these to be combined into a 3.5mm 4 pole female. Will I just be putting myself into crosstalk issues?

Could happen. Difficult to find out without an osciloscope and frequency generator.

Thanks. Will see if I can try it out on another system, as the post before said it was sorted once in the Thinkpad dock. Or go one step further and try and work out if its an issue with the socket/pole.