had Intel's S2600CP2J in mind, but nothing purchased yet.

So for $100 a 2643 v2 .. yeah not really a thing to look at. Especially considering X79 motherboards and dual LGA 2011 motherboards are insanely priced atm.

If you are looking at CPU's just steer clear of anything that's LGA 2011 really. The CPUs are cheap, but the motherboards are INSANE prices.

the Intel S2600CP2J i'm looking at is under $200. would you consider that overpriced?

the QE83 is the specific number of the chip.

If you want a badass system with a TON of cores, just spend the extra money and get a dual LGA 2011 V3 system.

OR just skip it entirely and go for ryzen, lol. Because 14core 28thread and even up to 16core 32thread Intel systems that have 2-3ghz CPU core speeds, are outmatched by the 8core 16th 1700/1700x/1800X
This is from my own testing with both kinds of systems.

bad news for me.

i hadn't seen mention of that anywhere. sucks, but good to know.

spend the extra money and get a dual LGA 2011 V3 system.
OR just skip it entirely and go for ryzen

budget won't allow that, unfortunately. I'd love a 2011-3 system, but won't happen anytime soon. plus all the ram i have is ddr3.

I haven't asked for advice here, yet, but maybe I should. this will be a workstation. programming, VMs, databases, for work; 3d modeling/rendering for fun.

as mentioned above, I have ram. plenty. also have a 1050ti and drives, etc.. what i'm deciding on is the CPU and motherboard. for price, I've been looking at Sandy Bridge and Westmere, even though Westmere is older than i'm really comfortable with.

What I'm looking for: dual xeons with a minimum of 4 cores + hyperthreading (strongly prefer 6/12). i'd like clock speeds in the low 3GHz range or faster. I don't want too high a tdp, however.

board should support at least 128GB ram, have dual NICs and PCIE slots for at least the 1050ti, and preferably more.

budget for the CPUs + motherboard is around $450.

the PCIE setup is a bit odd, but should be fine, has at least the one full sized PCIE so

Thanks. the idea of 2.4-2.9GHz worries me a bit. I know my typical workload favors cores over clock, but i don't want to be stuck with something too slow… is this a legit concern?

what about this board? i hear only good about supermicro. $270 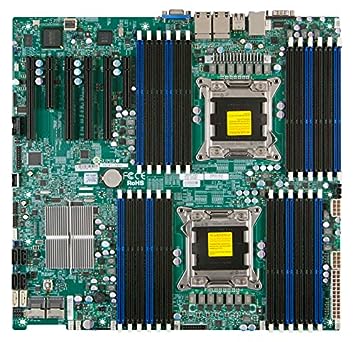 Could get a single socket 2011v3 system with an ES that has 12cores... Isn't going be super fast but not bade either. Wil be marginally faster than a dual 6 core system that's older.

unfortunately, would be way over budget — i'd have to buy new ram, too.

It really would not be over budget, above chip is $200ish and x99 motherboard are now 140-200 on eBay.
Then there is some extra left over

even used on ebay, ddr4 ecc is still expensive. just a quick glance, the cheapest i could get 128GB is $600.

not sure exactly what youre looking to do but i thought i would throw in there that the ooooollllddddd xeon x5660-x5690's are dirt cheap...i had an hp z600 with i think a single quad 2.4ghz chip that i swapped out for a pair of x5660's and added 48gb ddr3 registered ecc ram and with an rx480 and a pair of ssd's in raid 0, it was pretty quick AND cheap even then, and recently ive seen a pair of x5690's as low as i think $110 on craigslist so it seems like the price of those has come way down
that said, something that old may be too inefficient for your tastes or might not suit your workload but it handled everything i threw at it and never batted an eye and for the price im thinking of just buying another one now 4 or 5 years later
again, inefficient, i know, and the mem maxes out at 1333 so for applications that require quicker ram it wouldn't be a great buy but i was really impressed with it

Thanks. That's a possibility I'd already looked into, and decided I wanted a little more recent.

here are the cpu + motherboard + ram combinations i've considered so far (that are still in the running):

I have a dual E5 V1 2670 with 128gb, From the perspective of running multiple desktop vms, a few servers and as a workstation all in one it is a great value build.

I have been tempted to upgrade to the E5 V2 2695's for the extra cores. I have also tempted to start transitioning to a V3/V4 motherboard and DDR4 RAM BUT truthfully I have no need. I have a short stack of the intel s3500 ssds that make running multiple VM's pretty darn responsive.

A dual supermicro motherboard with a decent workstation configuration can be had at a reasonable price. I bought the X9DRG which needs an 11 slot case and will hold 4 double wide cards plus a few small ones. I wouldn't recommend this one as it pushes up your case price dramatically. It is good if you intend to stick in a couple of old xeon phi cards and a couple of video cards like I have but otherwise a big pain in the bum. I ended up buying the Lian Li D8000 case which has an insane amount of room BUT if it were an EATX board I could have bought a cheaper and better 4U enclosure and started building out a rack.

The 2670's can be had for <100.
8 or 16gb ECC DDR3 is actually affordable
EATX motherboards can fit in most full servers size cases.

Yep, the 2670's are the first ones i found. The 2667's are a bit cheaper, and I am happy trading a couple cores for the higher clock speed.

There's also a few similar supermicro boards on eBay that I might be able to get for a little less.

You're right about the stack of SSD's — I came to that realization just the other day. Considering an icy dock for them.

Not worried about size of anything. I'm pretty sure this is the case I'm getting: 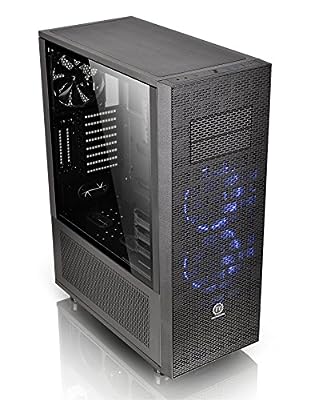 Input is still welcome! It will be another week or maybe two before I start ordering things. And I want to make sure I get a good, 5 year+ setup.

Be careful that case will not hold an EATX motherboard let alone something bigger. Always look at the number of pci slots. Large cubic space does not equal the ability to install large motherboards. I picked up a used LSI Raid card that I am going to change the firmware on. This gives me 8 raided ssds for ZFS. I have 6 ssds so far and am still waiting for the next good deal when I have money. I'm using the 600gb intel 3500's. Not the best by a long shot but good enough when there are 8 of them. For silly fast I'm going to add NVME to the workstation and for storage I will likely start shucking 4 or 5 GB external drives to build a big NAS array in server box.

I've been giving the idea of 40Gb inifiniband a bit of thought over 10Gb ethernet but am still undecided.

Right now I am still configuring my 1Gb network with a standalone pfsense server and a hp 1810g-24 port switch.

The Nanoxia Deep Silence 5 Rev. B does a pretty good at being enormous. Officially E-ATX but with a few zip-ties here and there it holds a dual Xeon without problems. 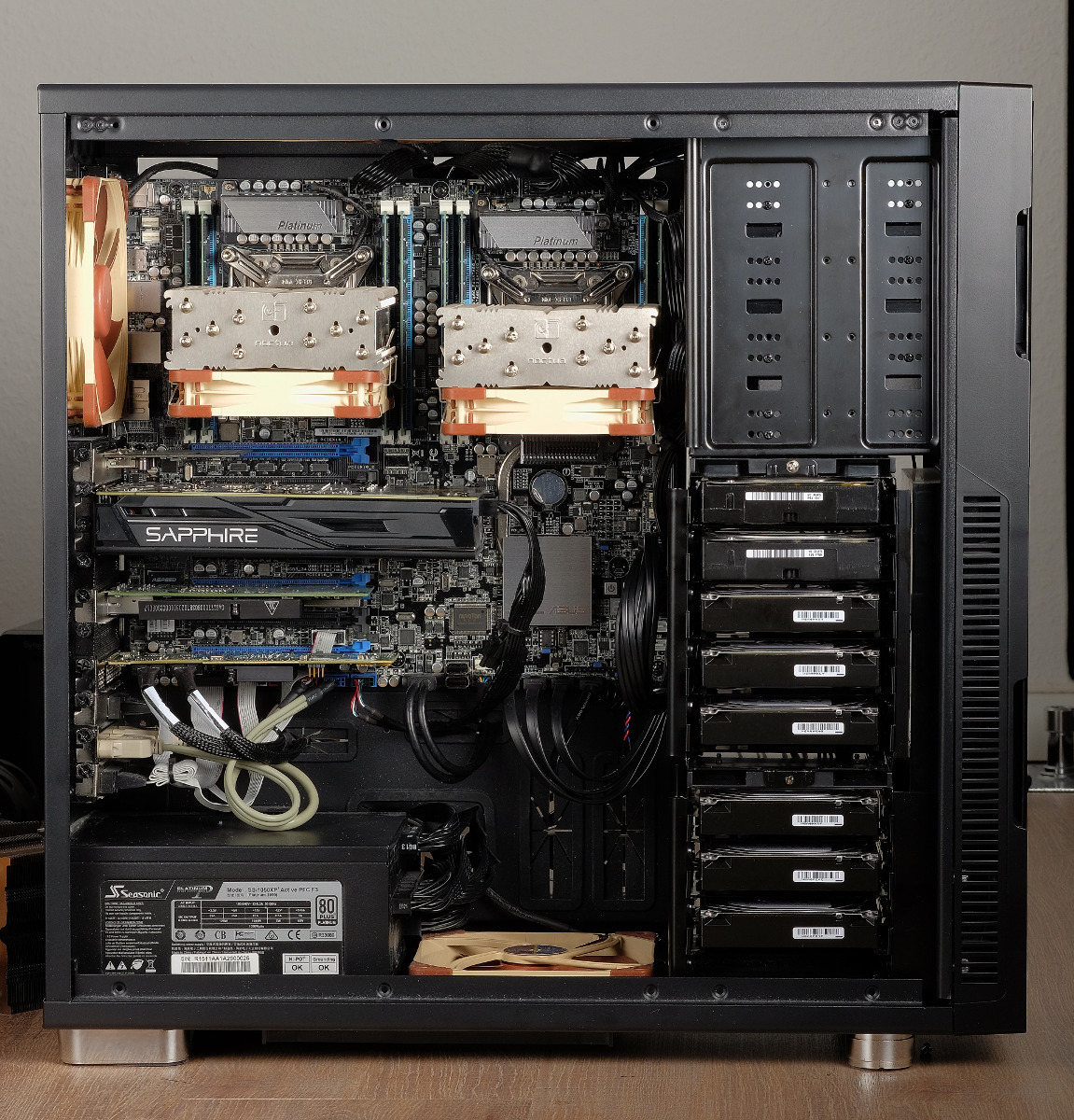 Same goes for the Corsair Carbide 400Q if the system does not have to hold stupid amounts of drives. 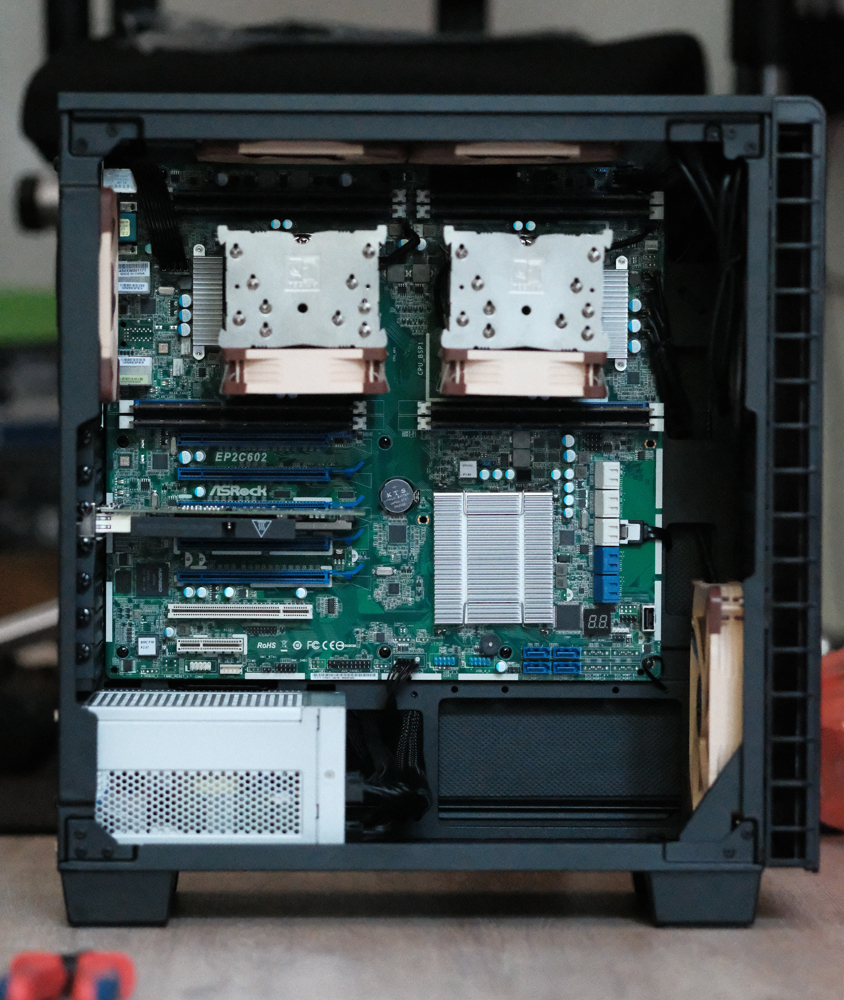 I picked it because I've found builds online that use it with SSI EEB motherboards (though now that i say that, i can't find the ones i was looking at). The board I'm looking at now is a bit taller, but there's obviously vertical space, especially if i put the psu in the lower compartment. I'm aware I may have to drill some new standoff holes.

my second choice for cases is the Phanteks Enthoo Pro, which specifically supports various large boards, all the way up to ssi eeb. also just found the Nanoxia Deep Silence 2 (thanks @noenken ) which seems very practical. but i find the thermaltake case more attractive…

Hi there, i was just reading around trying to see if there is any new trend in a xeon build for 2017 and i came acrossed this discussions. I could answer some of the questions regarding this type of build as I built my dual 2670 on cp2600cp2j over a year ago. It was a fun project but works were needed to get it to run like an OEM machines. There are a few things that can be improve and should be so. However, once the build is completed, i love it and i have been pushing it hard from day one.