I would like some input of the community here to determine what is the best way to achieve the following goal :

I would like to set up a PC so that I have 2x Windows 10 OS's and a 1x Windows 7 OS (each in its own partition), but in set up such a way that the OS's cannot see each other at all (to keep them completely separate), preferably by hiding the partitions of the OS's that weren't started up (like with grub4dos, for instance ?). Then add a boot menu so that I can select the OS that I want to boot up.

How would I go about achieving this ?

(P.S. : maybe our beloved L1 Tech masters could make a nice video showing us all how to do this properly ? ;o) )

Then add a boot menu so that I can select the OS that I want to boot up.

I'm sure that a lot of modern motherboards have such a feature built into the BIOS. At least when I was booting from different OS's before, I was able to select which before it would boot into any of the OS's that I had installed, like yourself, I had 3 OS's installed.

As for hiding the partitions, I'm not 110% sure about that, I mean I'd just google the crap out of that, personally. I'm confident that there's a way around it, but I'm not entirely sure how you'd go about doing that, I am sorry that I'm not much use on this part.... But I may look it up myself because I'm curious now, so if I find anything useful, I'll be sure to inform you of my findings...

I'm NOT 100% sure about this, but one way I can think of off the top of my head is by going into the disk management application in each OS, then click on the 'change drive letter' and then the 'remove' option, provided you know which drive in which OS it is that you'd like to remove..... But I'm not 100% sure this will work, I mean it's just an idea, if you wanna test it out for yourself, that could be s possibility? - If not then I can only suggest hope that someone else on this forum knows what to do. Or just keep looking into it..

I am sorry I can't be of any more help than that.

The only questions I have is... Why would you want 2 copies of Windows 10? Also may I be nosy and ask why you're installing Windows 7 too? ... You can see why I'd ask such questions.

The way I always fool proof my multi OS installations is by detaching the non-essential drives and only leaving the one drive for installation of said OS. This way you can just go into the boot menu upon post and just select which drive you want to boot into. That said, I really hate partitions...really hate them, they cause more problems then they solve in my line of work, especially when you don't get the benefits of actual drive speed and pfff forget about redundancy and aggregation.

Isn't that the only fool proof way? I do that too, it's so easy and effective! :D

Oh s**t, that's something I overlooked, he was talking about partitions... In that case, I don't think my above suggestion about trying to remove the drive letter would work, I'm not entirely sure, but I too don't really bother with partitions unless I have to for some weird reason. Just organise everything in some neat and tidy folder system and it's just as good.

To add different OSes to a BCD store, you can use MS's bcdedit tool.

I would like some input of the community here to determine what is best way to achieve the following goal :

Oh totally forgot. So the best way to achieve what you are trying to do is a completely different approach.

Just use a T2 hypervisor like VMWare Workstation or Oracle's Vbox.

Then you can have them all fully independent and it is trivial to switch between the different OSes. Workstation has better performance than vBox and there is also the T1 Hypervisor project called QubesOS that focuses on virtual machine isolation using (mostly) Xen. It should support IOMMU for native graphics performance in a dedicated VM.

Oh totally forgot. So the best way to achieve what you are trying to do is a completely different approach.

Just use a T2 hypervisor like VMWare Workstation or Oracle's Vbox.

I don't want to run a guest OS inside a host OS for these 3x specific OS's, I want the FULL set of resources available for each OS, so separate OS's each in their own partition seems like the right solution. I will also need 1 extra partition to house the boot manager / boot menu system (like grub4dos, if that one is able to chainload Windows 10 and properly boot it ???), so that would mean 4 primary paritions (which is doable from what I have read on the webbernet, 4 primary paritions is the maximum).

Just use boot to VHD feature.

You can also use disk imaging tools to clone your OS installs to VHD files and then boot from them. 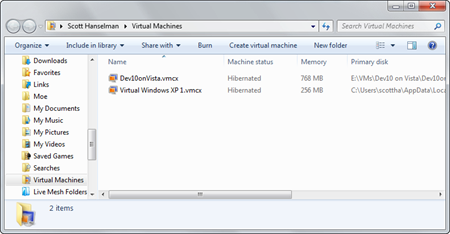 Less Virtual, More Machine - Windows 7 and the magic of Boot to VHD

NOTE: This is some advanced stuff and you may lose a finger. No warranty express or implied. There's always workarounds ...

Greg Shultz shows you how to prepare and configure your Windows 7 system to dual-boot Windows 8 from a VHD.

from each OS vhd you can easily control which partitions are visible through Disk Management utility.

What's nice about this setup is you can copy the vhd files and if you want to restore to a "clean" OS setup you just swap out the backed up vhd file. As for performance issues with VHD I haven't experienced any degradation, you don't need super fast SSD either.