Drives and durability with SSDs vs HDDs

Lets say I have external 250GB Intel SSD (about 8 months old), and an external 2 TB Western Digital HDD (probably green). Nothing super high end here, but both drives are pretty good performers. They are both attached to my NAS, which is limited by USB 3.0, and gigabit ethernet. The NAS does have a 5 drive zfs raidZ1, but I would rather avoid spinning those drives up constantly, unless I truly have some substantial work to have off to it. More on that....

I am wondering about an always on situations or frequent activity, other than colder storage situations. For example, I am a developer, so consistent Git Repository commits, or syncing files between machines throughout the day. Even downloading or seeding torrents over night, or for days.

Maybe I should regret not buying NAS drives, but I do think the there is some considerable play with hardware, which I am curious about.,,

So NAS, or server grade drives are an obvious consideration, but I am wondering if SSDs are better suited for constant or frequent loads, as opposed to spinning disks? Obviously SSD have limited writes, but HDD have moving parts which I imagine are less efficient for constant loads, or file checking overnight, etc. This is for a small office / development studio, so I'd like to avoid heat and noise, and minimize energy as much as possible.

Can anyone speak to this, or suggest maybe a proper setup here? Is this a situation where an addition SSD raid might be sort of attractive, or perhaps I am just smarter to simply backup a single larger SSD to a raid pool, like one or twice a day, as needed?

For constant reading and writing, an SSD is probably going to die faster than a higher end hard drive, since once it runs out of writes it's done.

Also intel SSDs have a safety or kill switch depending on your point of view, that makes the drive run read only when it feels it's about to run out of writes.

Yea constant data writes and reads on more "consumer" grade ssd's is not exactly optimal. You will have to pay for higher quality ssd's, then have to pay a pretty decent amount if you want high storage capabilities.

Companies like WD/HGST, and Seagate all have drives that are specifically made for NAS environments. Is it going to be as quick as an SSD? No. But you get drives that are durable, and reliable, which is really what most people want in a NAS drive. Now some will argue that they are just the same as consumer drives with a little tweak in firmware and perhaps better binned, possibly... But you also get a better warranty on the drives (usually) so that's always a plus.

I have 3 x 2tb WD Reds that I've had for about 1 going on 2 years, have had no issues, but that would be expected even in a non "NAS" drive. But maybe someone out there has some SSD's in a NAS, I would be very interested to see how long its been running and how well its performed.

I know that the basic consumer drives are not put together with constant workflow in mind. And SSD, especially consumer grade SSD do not have tons of writes in them.
But in my mind, I thought logically my workflow was no where near 24/7. No one that sleeps, can probably manage a 24/7 workflow. Lets be honest. My major issues were essentially large sprints, large system cloning, and tons of huge media files for editing projects, and then like long term trickle for random reads and writes with development (GIT), which I wanted to RAID.

I was thinking the SSD raid would be good for both of these use cases, over an ALWAYS ON hdd raid, simply because the drives don't need to be always on for one person, and SSD's basically never sleep or wake, and RAID probably made them collectively more durable, right? Allowing me to basically make the HDD on NAS fully glacier mode, plus some substantial ram caching if needed, or enough SSD raid to make some files available.

Honestly, I think I saved money buying an additional 5x255GB ssd on top of cheap toshiba or green drives, over buying just NAS drives. I know it's basically sacrilegious in theory, especially for people who think they're going to be pounding a server for editing, or production workflow. But the SSD staging ground seemed like smart, for a low user situation. Even a single power user like myself, I can fill the NAS quickly, but NAS drives seem overboard. Please feel free to give me your opinion if you feel strongly otherwise, I am curious how you feel, beyond what the drive marketing has shaped for all of us.

If you want continuous, long lasting performance and you have the money---SSDs are the way to go over ANY hard drive.
Lets look at some facts.
There have been several modernish SSDs which have successfully lived with TWO PETABYTES of writes.

Our SSD Endurance Experiment has reached an astounding two petabytes of writes. Only two drives remain, and they're coping very differently. We've checked in on their health and performance to see how each one is holding up.

Lets compare that with some Backblaze data...on Consumer Grade hard drives in an enterprise environment 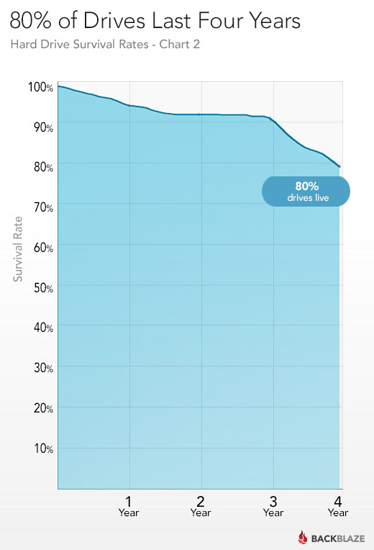 Even consumer SSDs managed to survive writing and reading well over 700TB of data. These drives usually come with a three to five year warranty, and manufacturers assume you’ll write 20GB-40GB per day in data. That means to get to that 700TB, you’d have to do 40GB every day for 17,500 days, or about 50 years. That doesn’t mean you should mistreat your drive, and it doesn’t mean SSDs won’t fail due to other issues, but if you’re worrying your SSD will die because you used it too much, don’t.

Dang NicKF,
I had completely forgot about those SSD tests.

I had logged all those backblaze data sets into my eyes a while back, and filed them away when I concluded everything was pretty acceptable. But those SSD tests, had insane results. It does defy that notion SSD have trouble dealing with writes.