Does anyone own an Nvidia Shield Tablet?

I'll be buying the Shield Tablet K1 soon for art, college and general use but I have a few questions.

I have the original tablet and it is pretty awesome. I can't comment on a case or hub because I don't use either. The stylus is pretty cool but not essential. I have tried custom ROM's like CM but I find the stock ROM is good enough for me cause it is pretty much stock Android, no skin just a few apps and settings added in. Overall it's an awesome tablet that performs really well for the price in my opinion.

I have a k1 and now they have fixed the problems it is awesome. In regards to the stylus they removed some of the functionality of the stylus on the k1 and it doesn't come standard and as a result there is no slot for it. The stylus works fine but the tablet doesn't know when you are using your finger or the stylus if you get what I mean.

I have been using this case since I got my tablet and it's very sturdy and the cover folding into a stand I have found very useful. 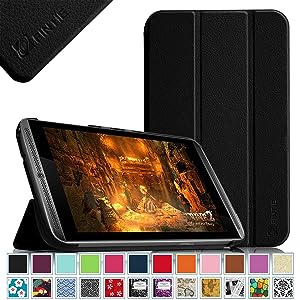 in terms of processing power the nvidia sheild tablet is more then able to run anything on the android market place.

that said any ARM device 6 above inches can be considered junk.

since a smartphone can fit in your pocket and a laptop offers more features at the same price point and is much less locked down.