Does anyone know how to tell if a four pin fan connector is actually using PWM signal modulation vs just voltage modulation?

PWM fan hubs usually require you to connect to the CPU fan header because on every Mobo it has some form of profile in Bios. A lot of motherboards though are starting to offer PWM on all fan connectors. I have a Sabertooth 990FX and I can set up profiles for all of the fans through bios or software. There are two ways to tell if your fan sockets are PWM. Check bios for fan profile on case fans or check to see if the motherboard has software you can install in the OS. The only other way to tell easily is to do some research on the motherboard.

Edit:
http://www.asrock.com/mb/AMD/FM2A88X-ITX+/?cat=Download&os=Win764
Specs talk about ASRock FAN-Tastic Tuning but no software download for it. Hm...

Edit2: Try the ASRock A-Tuning utility for your OS (I linked Windows 7) in the downloads and see if there are fan controls. Once you know they can be controlled you can check the bios if you prefer hardware based fan profiles.

I have A tunning which you can get from the windows 8.1 sections which works fine. For some reason asrock doesn't have windows 10 drivers for fm2+?. 8.1 drivers work fine. I think. But yes you can change fan speed from bios. However it still can be voltage modulation. I'll give it a try anyway. Amazons got a good return policy anyway.
Thank you.

I just got sick of my loud fans, retired my optical and swapped it for one of these: 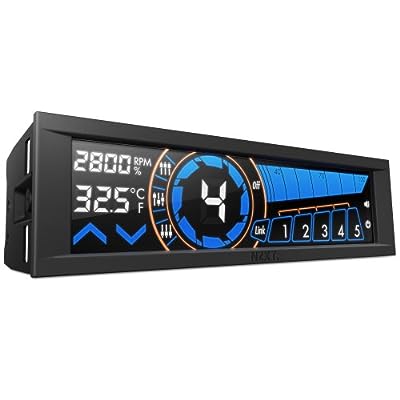 The Sentry 3 brings you the best of both worlds by combining 15 watts of power per channel with an extraordinarily intuitive UI, giving you complete control over your entire rig's cooling with the swi ...

Controls up to 5 channels with voltage control, 15W/channel. Compatible with both 3 and 4 pin fans. Supports thermal or load alarms, comes with a probe, and has channel linking as well as Performance/Quiet/Manual profiling.

I would but itx build. If I had a bigger case with more fans then yes. But three case fans and then the CPU fan no need really. I'm going with the phantek which will be just fine for what I want to do even if I need to put it on the CPU fan connector. It really isn't a big deal more of a preference. But thanks for the suggestion I might be upgrading to something bigger at some point and I'll look at that since software can be a bitch at times for MoBos.