Heya forum dwellers. Since I have no idea where to post my question I'll stick it in here for a mod to move.

For the past 3 or 4 months I've noticed the free space on my hard drive vanishing and mysteriously coming back. I've noticed some of the temp files generated by my graphics programs can sometimes do this, however, the space vanishing can be as much as 20GB and I may only recover 5 or 6 gb of space back. I've cleared temp files, performed boot scans, uninstalled older programs and yet the space continues to vanish. I'm not sure what else I can do... Other than some kind of ritualistic animal slaughter on my tower. Though I'm hoping it wont come to that.

Before folks ask, yes I'm using windows 7 home premium and yes I know I'm a pleb. Has anyone else had this issue? If so, what was the fix?

Download Windirstat and it will show you what is using your space.

Both Windirstat and overdisk are telling me my drive only has a storage space of around 650GB. However my drive is a hitachi HDS721010 1TB. Not sure what's going on with that. 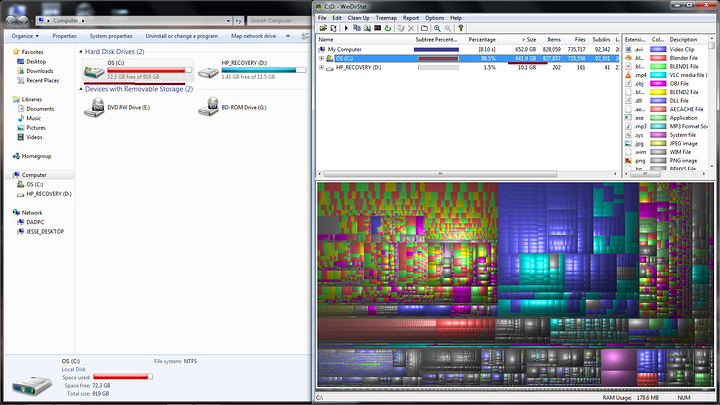 It sounds like something is stealing the partition space. My first guess would be recovery, but it says it's only ~10 GB.

Right click on Computer > Manage. Go to Disk Management and find your Hitachi. It will probably be split into a few different partitions. If something is shrinking your C drive to make room for another partition, it would be visible there.

Though, it is odd that File Explorer and WinDirStat report different sizes. I have no idea what's going on there.

If it is your graphics program, it could be that it's trying to save content to recover "at your convenience" if you want to try to scavange it later. That might be a setting you could turn off if the software was programmed sufficiently.

I've had a quick look at my disk partitions. According to that explorer I should have 919GB of hard drive space. I've been surfing for a fix and someone on another forum said it might have something to do with windows restore points? I'm running disk cleanup at the moment to see if that raises any red flags. 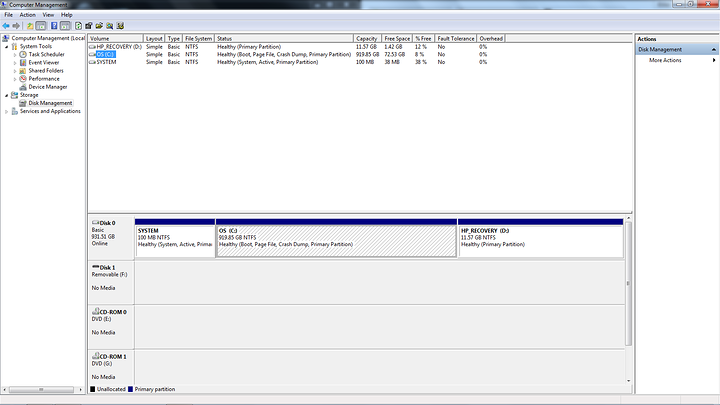 Update I've removed all but the most recent restore point. It's freed up quite a bit of disk space (Around 200GB) however, I'm still seeing a disk size of 641GB when I run WinDirStat

I think you've been ripped off.

Where did you get your hdd from?

my guess is it has something to do with block allocation. you might be able to fix it with test disk but fiirst you might want to try Tree size free and see if it can read drive space correctly.

how large is your paging file?

The disk is genuine, it's a stock HP build with a few tweaks. I'm loading up Tree size right now to have a look at that and I'll download test disk in a minute. My paging file for all drives is 6130mb.

According to Treesize the disk space used is 659GB and I have 273GB free space. So that gives me my total disk space of 932GB. I think TF has counted the recovery partition. Everything seems to check out. I'll have to keep an eye on my HD space but I'm reasonably sure windows restore points were the culprit here.

Thanks for the help folks. Glad this B**ch of an issue has been solved :)