Did I install linux wrong?

I installed openSuse 13.1 a while ago, and got Steam running properly with proprietary Nvidia drivers. But i haven't been able to play teamfortress 2 because I can never join any servers. The progress bar keeps getting stuck during loading screen and it just becomes unresponsive. The HDD LED on the laptop is lit up the entire team when this happens. Also, the game itself takes more than 15 seconds to load from steam, on windows 7 it takes only 5-6 seconds.

I suspect that it may be a drive issue or maybe a partitioning issue. I'm dual-booting windows 7 and opensuse13.1 with GRUB.

Partition 1 and 3 are windows C and D drive. Partition 6 is / and partition 7 is /home. please ignore the SMART warning, I have been getting it for months now.

Did I do it all wrong? 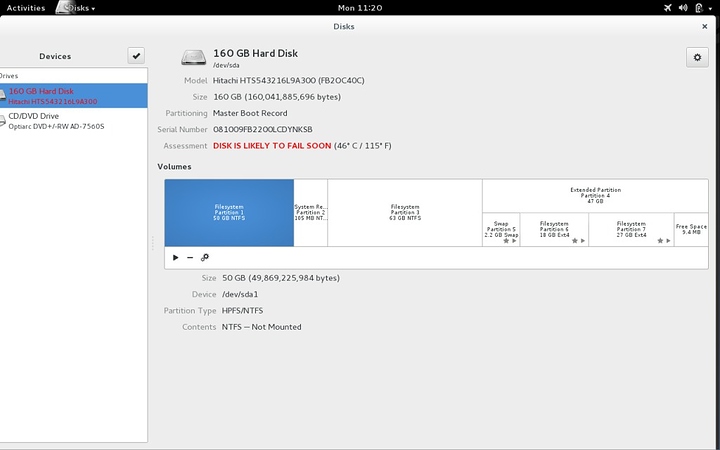 According to what you describe and what openSUSE is saying, you need to replace you HDD, this could be a contributing issue, I dealt with a SMART warning a few months back, it is an advanced warning.

We recommend here not dual booting normally, mainly because we dont like windows, you can do if of course, but I believe the better method is install W7 first then install Linux, as GRUB can take over the bootloader, check the openSUSE forums for dual booting.

Check your firewall settings. Probably your firewall is blocking the Valve anti-cheat function, and that's what's preventing you from joining TF2 servers. You'll find the info your need on the ports that you have to allow on the Valve website.

Not sure if it's the issue here but seriously don't ever ignore SMART warnings, there are many factors affecting the harddisk, and SMART reporting it's going to fail might not mean it will fail tomorrow, but it might fail at any point, so backup and be ready.

There are some tools you can install to check exactly what issues are being reported by SMART if you want to get more insight on that error.