Did AMD Pull a Rabit Out of its Hat?

Did amd just pull a rabbit out of its hat??? We all should have heard, by now, of the leaked specs for the Playstation 4 and the Xbox 720. 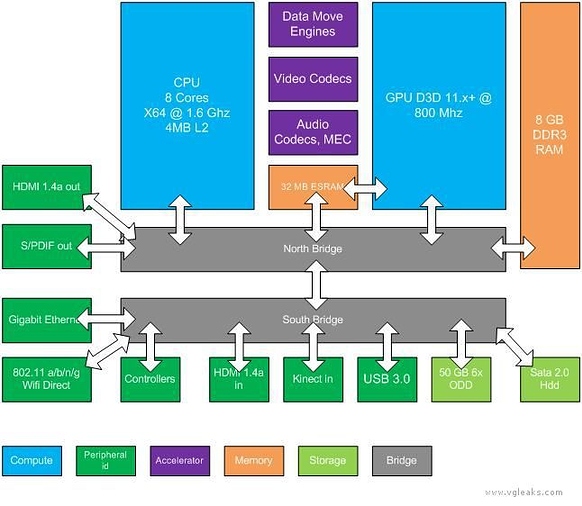 The point is though, when they have 8 cores to work with on the consoles, which assuming they fill the same role next gen as the do now (which I doubt they will even as a person who still enjoys gaming on console), they'll have no reason not to. The only reason games now are only optimized for two is to save money in production costs by not having to produce two separately optimzied builds. In fact, if the consoles run 8 cores then it'd be in their best interest to optimize for 8 cores.

the Ps3 has 8 cores in the CBE but one is used for the OS and another for security, so that leaves 6 cores, so we should see some optimized games but nothing too different from what we see already.

If gaming does start supporting more cores, you can bet that Intel is going to come out with some mainstream 8 core CPUs and then have some 12 core CPUs for their enthusiast platform.

The PS3 has 8 now woefully inefficient Cell Processor cores. The fact that it's running at 3.2GHz and barely keeping in touch without any extra stuff running in the background is testament to that. The PS3, and Xbox 360, basically runs like a dual core, which is why it's so inefficient and why optimization for dual core is so common. We should see considerably better optimization across the board.

8 core maybe, but 12 core? No. Intel has always been about squeezing as much out of each core as possible. Their price and performance per core is much higher. For them to be putting out 12 core CPUs that sell we'd have to see them abandon their current philosophy of max performance with maximum efficiency.

rumour has it that amd will be doing the cpu/graphics cards for the new xbox aswell, so if they are doing hardware for all the next gen consoles, this might be the new line of cash for amd

PS3's Cell processor has 1 core, 8 synergistic processing elements. Also it's not inefficient, it's just incredibly hard to develop for and making it seem like the processor is inefficient from the user's perspective.

Over the last year, AMD executives have been abandoning ship for rival Nvidia, and according to a new lawsuit, they took confidential information about the Xbox 720 and PlayStation 4 with them. Engadget reports that AMD has filed suit against four ex-employees, claiming that the executives absconded with thousands of confidential documents, including sensitive information about technologies at use in next-gen consoles. As our well-placed sources told us last year, custom silicon based on AMD's A8-series APU and HD 7670 GPU will be used in the PlayStation 4, while the Xbox 720 will combine an IBM PowerPC CPU and a custom version of AMD's 6670 GPU.

The lawsuit targets the former VP of AMD's Strategic Division, Robert Feldstein, who played a key role in developing custom hardware for game consoles like the Xbox 360, Wii, and Wii U. AMD claims that he and others transfered 100,000 files that contain trade secrets related to development, based on "forensically-recovered data" that indicates the executive used external storage devices on his company computer before his departure. What's more, Feldstein and Richard Hagen, another AMD executive, lured two other employees to Nvidia.

With Nvidia seemingly edged out of the upcoming console generation, Feldstein could be the key to regaining a role in future console hardware. Whether or not he has or will use proprietary data stolen from AMD to help achieve that goal remains to be seen.

What do ya'll think?

Why does it have USB 3 when no one hardly even uses it as it is? I get that in the future more and more applications will become available. I guess since this gen console will have a 38+ year life cycle it's a must.

I don't know if that's necessarily their philosophy. AMD just came out with an 8-core CPU because they wanted to pressure Intel a little bit more, plus it's a selling point to people who either don't know anything about computers or are going to be using a lot of multi-threaded applications.

Last generation, AMD only had quad cores while Intel had hexa cores out already. Now that AMD is pushing the envelope a little bit more on the number of cores, Intel will probably respond with more cores per CPU in their next generation. They already have powerful cores. They just have to figure out how to put more on the CPU die and make it work.

nope acording to wiki, amd had its hex durring april 2010

thats a good 3 months in advance

because they want to seem like theyre technological and will last years when in reality a year or two after theyre release theyll be outdated.

but will intel have 8 physical cores or do the hyper threading they are keen on with vitural cores, which could prove to be a bad move for them if game developers decide support multicore processers.

intel's most likely solution will be to have hyperthreading on i3-i7 cpu's and with haswell we might see a 10% ipc incress but thats the same as the steamroller cpu's it seems that the amd cpu's will be better for gaming then the intels untill you look at i7 cpu's I think the new amd 8 cores and i7's will be very close for gaming. (keep in mind that the per core power of intel will still be better and that i am only looking at gaming.)

if the next consoles are going to run for 10 years like the current consoles it will need usb 3.0