Being the family's resident IT support has its ups and downs and data loss is one of the HUGE downs. I have two WD Passport drives and both appear to have the same issue, that is, whenever they are plugged into any computer, be it Windows or Linux they take a solid ten minutes to mount, any attempt to access the drives after this process is complete ends with "explorer.exe is not responding", and won't respond until culprit hard drives are disconnected from USB (On Manjaro, Thunar just says it is loading and never does, but it doesn't make the rest of my system unresponsive, Gparted also just says "Scanning for all drives" for a long time but it will eventually show up). Disc activity in task manager is always 100%, even on idle, once the data is accessible, read/write speeds are atrocious. on USB 3 it took 2 minutes to transfer a 226kb document. So what gives?

The first hard drive is about 6 years old now, and it takes considerably longer to mount than the second so I'm almost certain its a write off, in hindsight however it has a pretty easy life, the second drive is used by my Mother extensively for radiography conferences, presentations, family photos etc. So there is a bit of an issue if all the data is lost, and its only about 3 years old. It seems to be a popular opinion that the SATA bridge is the culprit of this problem, at least from what I've seen online thus far. Will continue to try and find issues with them using smartctl and badblocks but any tips or pointers would be much appreciated.

That's what the problem is. These external USB drives, especially ones powered by the USB itself, are prone to failure.

I'd suggest removing it from it's case, and plugging directly into SATA. Don't try another USB adapter.
And when you do it, expect you might only have one opportunity to get the data off before it goes 'kaput'. So have ample storage ready as a destination for your copy procedure.

If that doesn't work, then you are probably looking at more complex recovery options.

Bit of an update. I managed to crack open the first drive (the one thats 6 years old) after having not too much luck trying different options in the OS. I was greeted with this: 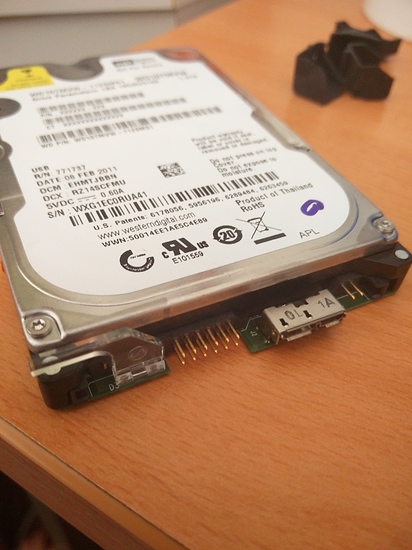 IMG_20170131_141105.jpg3120x4160 1.03 MB
(Model of this drive is WD10TMVW) The USB power is attached directly to the PCB of the hard drive itself. I was hoping there would just be an adaptor from SATA Power + Data to USB3 within and i could simply drop the hard drive directly into a motherboard's SATA connectors and problem solved. So I don't know what to do now? Speak to someone about professional data recovery maybe??

Externals are horrible. Probably just going to invest in a NAS or something.

An interesting YouTube channel I found lately is called HDD Recovery Services.
Delves into recovery of all sorts of HDDs and solid state memory. Unfortunately it doesn't go into specific exact details, because that's their corporate knowledge, and they are providing a service.
There might be videos covering this type of drive, I haven't looked or seen them all yet.
But you might gleam enough info to know if its worth sending the drive away.

I'd love to see the underside too.