To anyone that are on the fence/first time and hesitant I’ll be 100, my first time sucked, but I was much ‘greener’ then and was somewhat by myself. I went a second time because I had grown in the IT/infosec realm at least a little bit, and had some friends heading there so we roomed together, went to talks together, totally 180 experience and had a blast. So I reach out, anyone heading that way hit me up, let’s meet up. Last time around I met KenPC and morbid_bean (toxic BBQ was legit man! Haha) and it’s an blast to link up, have some drinks, chat etc (drinking is not necessary if it’s not your thing).

Not this year. Definitely want to go, but I don’t have the time.

I’ll be scheduling next years as soon as I can though.

I would go for the people but not the conventions

I would love to go but cant really justify it, $270 ticket + 160ish + a night for a room = like $1k min expense not including vacation time. While I love to watch their talk and having been to a bsides event, I dont see anything not in my local area unless my company is picking up some of the tab.

All valid points- and I pretty much go for the people now, the coworkers or ex-coworkers (some of which get the tab paid for by work because their work is cooler than mine haha). Last year a buddies room was paid for by work and he let me crash, so I had that going for me. This year I got a big hookup as well. And that is one of the things touted about defcon- social network building.

@mutation666 imagine paying for blackhat out of pocket

Thats a place I would only go to if work covered it 100%.

With a website dedicated to hosting all of their talks past and present, tools, rainbow tables etc + the insane crowd (I do not like crowds) there is less and less reason to attend. That said its becoming a meetup tradition with some friends, , and I hope to see some level1’s that make it out as a bonus.

One day maybe I will get paid to go, not really in a security role atm. I try and stay current for the admin part of my job, but honestly I have zero ability to do any patching that the gov hasn’t blessed first.

Nah, I don’t have the time or resources unfortunately.

Unfortunately I will not be making it this year; trip can be quite expensive. I really want too though! I am trying for DC28 though.

All valid points- and I pretty much go for the people now, the coworkers or ex-coworkers (some of which get the tab paid for by work because their work is cooler than mine haha). Last year a buddies room was paid for by work and he let me crash, so I had that going for me. This year I got a big hookup as well. And that is one of the things touted about defcon- social network building.

I hate to be a sourpuss about it, but it’s one of the in person events I went to that was legit as toxiccc as the Internet. The smug elitism choked me out of the building. I couldn’t stand it. Had fun out and about, though, and met some cool people.

That’s interesting. I could imagine the elitism, but I never really thought it’d be there. Figured that would be more of blackhat.

Figured that would be more of blackhat.

I just find it bizarre that people are meeting in unified interest on something but still have to one-up or own someone. Especially hearing about people trying to cover the event, just lol at some of the comments. “We don’t talk to media. We’re not mainstream.” That little giftshop you have says otherwise. And lol at “media”. Yeah, my 2,000 followers are totes mainstream, brohowski.

Things and culture could have changed, but I much prefer local meetups these days. Not a hit to @Token or anyone else that is going to go and have a great time. Just not my thing. Neither are roller coasters anymore, if that helps with perspective

Yeah, that’s probably the primary reason I want to go to defcon. California outlawed self defense and fun.

@AnotherDev that’s what I hated about my first time at defcon and why I admitted in my earlier post “being 100” honest- first time blew. Despite what defcon tried to paint itself (inclusion, social network, meet new friends etc) it felt the opposite.

Going there with a network of friends totally changes that + I feel so much more diversity has entered the infosec community as the job market continues to grow. I went from not wanting to go again to ‘oh I can crash at your room, cool guess so’ and had such a blast I’m going with the same group plus 1 this time around.

Plus these fine folk let me photo. I’m edited out cause meh, still not big on posting pic on forums- this is a defcon thread am I right? 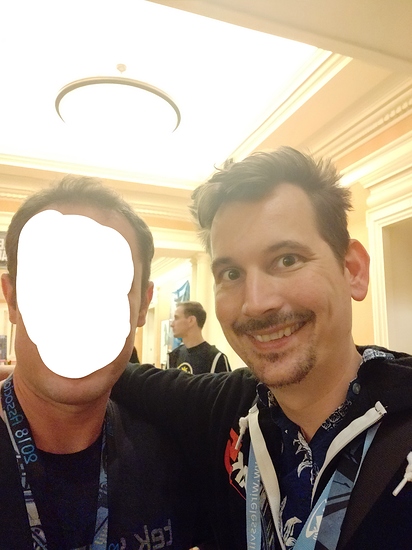 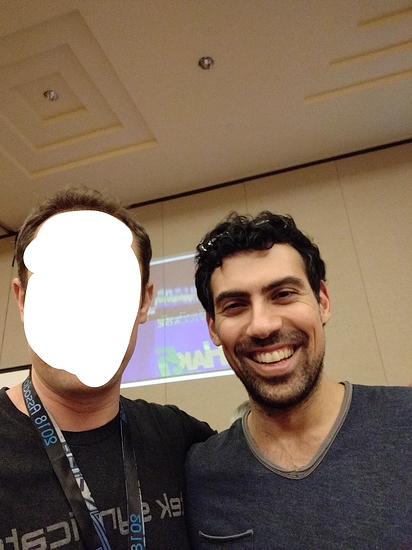 Samy is legit a nice guy. Wish I was at a level to actually talk as a peer, something to aspire towards.

@morbid_bean ah man, guess it is what it is. Maybe DC28 then!

Actually tho dude, you should go. Pick up your “I’m the fed” tshirt.

IDK if they still do it. Haven’t been in a few years.