since my current Laptop is already over 3 years old I finally want to build a new PC. I live in germany and i'm planning to order most of the parts on http://www.mindfactory.de/ (probably one of the best online shops for PC stuff in my country). The budget for the PC itself is around 800-900€ (~1000-1100$ or ~700 pounds) and because i'm moving from a laptop i obviously need a screen and a keyboard aswell. For those I want to spend around 200€.

Main purpose of my PC build is going to be gaming (in 1080p). At the moment I play Cs:Go most of the time but i want to play new games once i get my new PC (AC:Unity, BF franchise etc.). As a competitive FPS player i don't realy care about the highest settings but if I will play games like Unity i'd like to have some decent graphics :D. For now I don't want to go with a water-cooled system and i'm a little bit unsure about overclocking (I have no experience with it and i'd be thankfull if someone could give me advice if it would be benefical or unnecessary).

For the screen I don't want to get anything bigger than 24", it's the absolute max and I was tending more to a 21,5" or something like that (60hz should be ok ...  120/140 is just too expensive). If some of you guys have good expieriences with a keyboard (i'm playing fps games most of the time but I don't think that matters too much)... Mechanical, scissor, membrane, ... i'm pretty much free for everything good :). I already have a mouse, (mousepad) and a headset so I wont need one of these. OS should be Windows (just because of the games). I guess Windows 10 would be the best choice here ? I already did some research and one of the only things im 80% percent sure about is the GPU which is probably going to be a GTX 970 (most likely ASUS). I'm pretty unsure if I should go with Nvidia/ATI and Intel/AMD. At the moment im tending to a Intel/Nvidia build but again if someone could post his expieriences i'd be realy thankfull.

To sum up the basic things:

I just stepped over this Build from pcpartpicker http://pcpartpicker.com/guide/tYgXsY/great-gaming-build

It's basically what im searching for but the problem is that the parts cost the same in germany ... but in € so it would cost around 1000€.

Some feedback on this whole thing would be realy nice :)

Yeah the thing is, our € prices cannot be one on one translated to US prices. If you wanne build a similar setup like you have, in Germany or Holland, then you will sit arround the €1100,- price mark.

partpicker germany sucks a bit. But atleast you can compair some parts. I would say check sites like hardware versand.de or Alternate.de, Because part picker does not show much parts.

you could skimp out the SSD and the cooler for now, because that are parts that are not nessesaraly needed. And can be easaly added later on.

i assume you wanne stay with a GTX970.

Hm so the cooler is not THAT important? And yeah I kinda want to stick with the GTX970 ^^ also because of this Nvidia expierience stuff (shadowplay, ...). Whats with the mainboard ? would one around 80€ work out aswell and is there a big difference between the i5 4690K and the 4690?

Well the cooler is offcourse important wenn you wanne overclock, But if you run on stock speeds you are basicly fine with the stock cooler. You can allways upgrade the cooler later on if you like. So thats why i said an aftermarket cpu cooler is not nessesary needed now. But i would definitely recommend one in the future, cause stock coolers temp to be loud.

Diffrence between 4690K and 4690 is basicly that the K version is unlocked and overclockable on which the non k has a locked multiplayer, and allmost no overclocking possible.

If you dont care about overclocking, you could offcourse also grab a 4690 and a H97 motherboard, and save some cash. It will perform great anyway, only H97 does not support Sli. But that does not realy matter with a single gpu setup.

So yeah if you dont care about overclocking, then you could concider a 4690 with a H97 board. But i think that in the end, it will not be that much cheaper. But offcourse every buck is one.

I knew that the "K" is unlocked :D but i wanted to know if there is a big difference between a overclocked and a "standard" 4690 :). Since i dont have any experience with overclocking i could imagine going with a normal 4690 and a little bit cheaper motherboard. My last question would be which gtx970 to choose :D. I heard that EVGA is one of the best and the ASUS one is pretty good aswell. 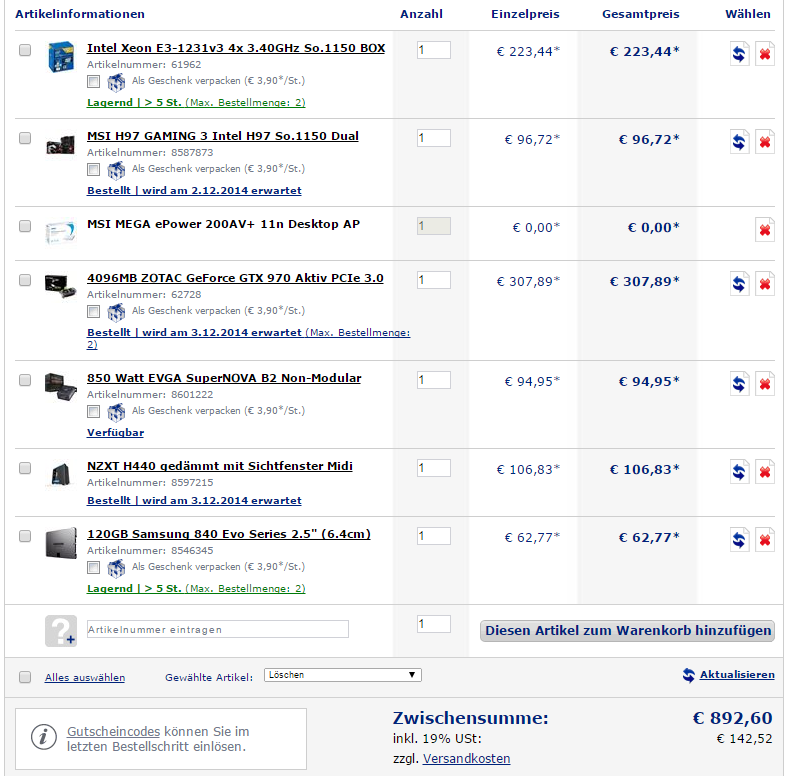 Nothing ? ^^
At the moment im pretty sure about most parts but the only thing that keeps me thinking is which GTX 970 would be the best. MSI, EVGA, Gainward, Zotac, ... alot of poeple are saying different things about this topic and im a little bit confused.

Do you have your screen planned ?

If you already have a bit of storage , a 128 gb ssd can make a real difference .

Except for that , perfect !

Is there a big difference between the h87 and the h97? I want to save as much as possible ^^ (thats why i wont go for a SSD for now + I dont have other storage devices since im currently using a laptop :)).

And the 60hz screen that you posted looks good, ill probably buy that one.

Basically the last thing I need to decide is if i want to buy the Fractal Define R4 case or the BitFenix Shinobi.

I'll maybe add a CPU cooler aswell but that's it in general. Some critique would be very nice :)

EDIT: changed the link (replaced the MSI GTX970 with the Gigabyte GTX 970 G1 since the MSI is not available and the Gigabyte should be fine too).

I'm a little bit of a Fractal Design fanboy.  I give a vote for the Define r4, although it's kinda hard to compare the Bitfenix Shinobi as they aren't really in the same price range.

No need for a CPU cooler since you're not overclocking.  If the stock cooler gets too noisy, then look into one.  With the silence optimized Define R4, you shouldn't really hear the stock fan.

I've ordered all parts now and will probably post some pictures if all parts are ready. For screen and keyboard I bougth the Acer S242HLCBID and the Razer Deathstalker.