It seems that the Capture Card itself is fine since it’s being recognized by any PC I connect it to. I am even able to update it’s firmware successfully.

The only thing that doesn’t work is the HDMI in, the devices I connect to the capture are also unaware that I connected them to the HDMI in.

My question is if there is any way I’m able to repair this myself? Soldering is no problem, my issue is that I can’t find anything regarding the schematics of the capture card, or about repairing a blown HDMI in port.

If any of you can help me with this I would really appreciate it since these cards are not that cheap… thanks!

or about repairing a blown HDMI in port.

My question is if there is any way I’m able to repair this myself?

I suspect it is not the port that died, but the components behind it.

Thanks for the answer, so you think something else died? Is there any typical damage done when a HDMI port is blown or does it solely depend on the circuit?
(Thinking of some standard HDMI in circuit or something)

so you think something else died?

What died depends on the circuit. If you haven’t, take it apart (noting what screw went where). Look for black/brow stains and blown components.

If I could get my hands on the schematics

Good luck with that.

Is it in-warranty? Magewell would probably take care of it for you.

There has to be a standardized layout (that is available) for a few parts on the PCB. Is there any standard HDMI circuit layout available? As far as I know HDMI has a pin for 5V and I think the blown part has to be somewhere on that trace.

If all attempts of resurrection fail, the elgato camlink 4K is actually pretty neat. I use it in OBS on linux.

I also have a camlink but the reason I would like to resurrect my Magewell card is that it has a scaler unlike the camlink… since I would like to record some non 1080p resolutions with different aspect ratios etc.

It’s likely the HDMI receiver failed. You can try to buy a identical receiver chip on Aliexpress and solder it in, but be prepared to do some I2C programming. If it doesn’t even show up with the color bars, the scaler is also broken and you need to replace that too, but most likely it’s only the receiver chip that broke.

If you provide teardown photos, I’m certain someone from some of the enthusiast electronics audience can help you out further.

If you provide teardown photos, I’m certain someone from some of the enthusiast electronics audience can help you out further.

Sure thing, in case I forgot something please tell me! 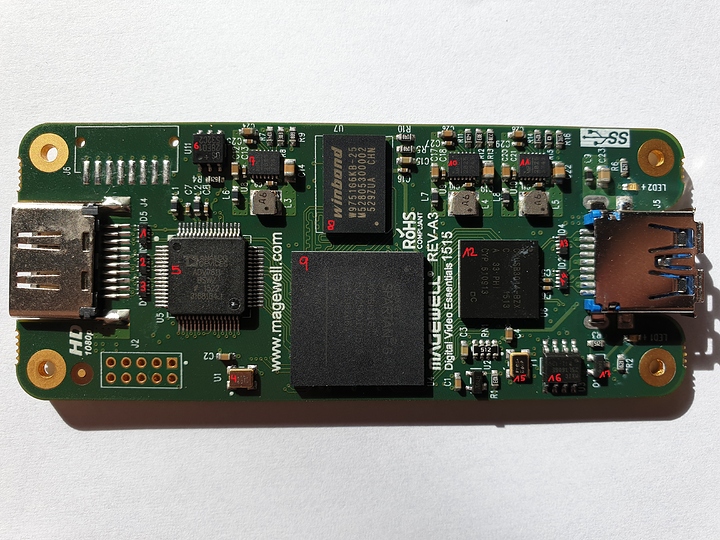 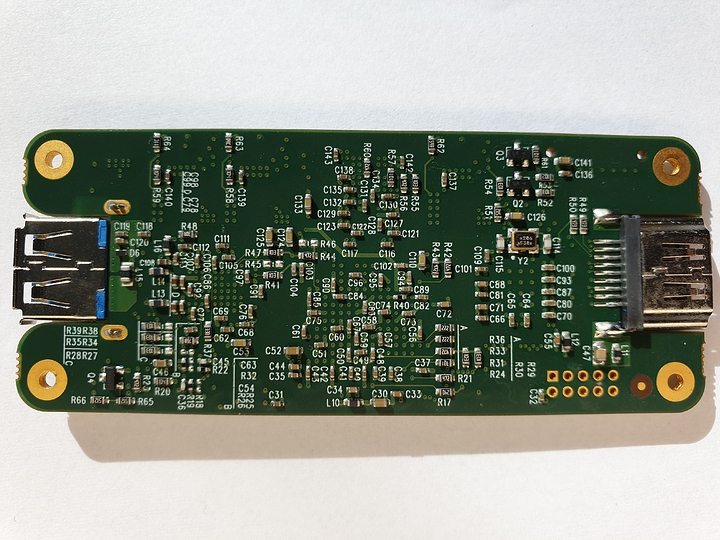 Unfortunately I don’t have a better camera on me, I hope this is good enough!

Why do you think the HDMI connector is busted ?

4 and 15 are Oscillators.
You can check them easily with a multimeter.

Number 5 is a a rather interesting one. Presumably the HDMi input chip. Is it getting hot ?

Yeah sorry with HDMI in I mean that something regarding the HDMI circuit has to be blown, as the capture card still gets recognized and I am even able to update it’s firmware.

Number 5, the HDMI Receiver does get hot but only if I connect an HDMI cable.
Number 8, 9 and 12 also get hot when connected to a pc.

If the HDMI receiver is not blown then it has to be something else.
Should I just try my luck and order a replacement receiver off Aliexpress and replace it?

The Analog Devices chip is most certainly the HDMI Receiver. The FPGA contains the scaler logic so if the receiver is bust, it SHOULD NOT affect the FPGA as the data format is different going to the FPGA. The FPGA is the most resilient part out of all the parts.

If you order a replacement, you may have to do I2C programming, or re-flash the firmware with hopes it will write over I2C to the receiver chip.

That’s good to know, fortunately it seems the HDMI receiver itself is quite cheap.

I’m going to follow your advice and will first try my luck with simply replacing the HDMI receiver and hoping in case it needs programming that a simple firmware re-flash will take care of it.
Otherwise I’m always willing to learn.

Thanks a lot guys!

I’ve just come across this topic whilst searching for “blown ADV7611” as I’ve got a Magewell XI400DE-HDMI PCIe card with one blown ADV7611 on it (it actually has a hole in the top of the chip. I think a cheap DA with the wrong PSU has killed it, as we had a similar problem before. The cheap DAs simply pass the input DC (in this case accidentally 12V) to the HDMI outputs (which should be 5V). The internal electronics of the DA work fine, as they’re regulated down to 3/3.3V.

@r0verl0ad - Did you have any success simply replacing this chip on yours? If so, I’ll do the same with this one, rather than having to send it back to China for repair.