In games you maybe have 1 frame per second increase with 1600 mhz instead of 1333, but in everyday use you won't notice the difference.

So does that mean the 2133mhz is pretty much a rip off with no real gain?? Should I stick with the 1600mhz?

Ohh and also, (it may sound stupid) but does the size of the sticks matter in any way? For eg. is there any difference between 4x4gb sticks and 2x8gb? 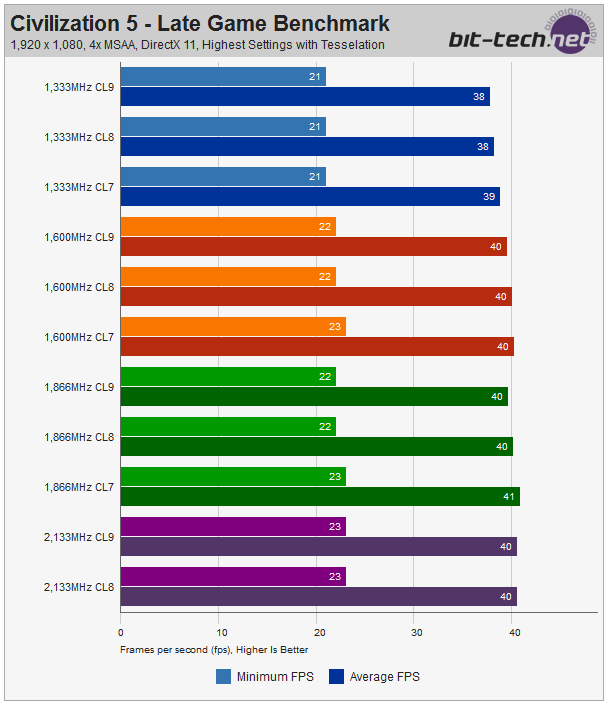 The only real differance it makes is for overclocking, I generally recommend 1600 for intel builds and 1866 for AMD, so you can drop the 1866 down to 1600 and overclock from there.

I was waiting for you to come with that graph, haha.

I feel no shame haha, It is my duty to troll with semi relevant information.

And does the size of the sticks matter? Would 4x4gb be better than 2x8gb or vice versa?

I generally recommend 2x8 sticks, so you can get the most memory possible (if your motherboard only has 2 slots), or so you can get more memory if needed in the future.

They may be a little more expensive, but you are future proofing :P.

Also, browse around for memory. There are a lot of brands, Corsair, G.Skill, A-Data, Kingston, Mushkin...

Plus, RAM is dirt cheap these days.

Yeah I kind of realized that my memory is costing me too much and I was hoping for something a little cheaper but quality at the same time..

This is my current build:
http://au.pcpartpicker.com/parts/partlist/

Any help is appreciated regarding the current build, Thanks

No suggestions of some quality ram??

All honestly I don't think anyone really gives a fuck what Ram they have as long as it's 1600Mhz+ and Has a 10 or lower cas latency. Get whatevers cheapest. If I were you I'd just get Quad channel ram since 16Gb is already pretty future proof