Hey, I am trying to fix friend’s computer. Short story is that, his electrical system burned down, some items got broken after that including his PC.
What was changed:
*PSU got changed, for sure was burned.
*Mainboard got changed, because sometimes usb or/and sata didn’t work.
Right now I am not sure about CPU (4790k). Sometimes computer just doesnt post, maybe because of ram. But I did mem test for 24h and no errors were found. Current issue is: CPU reaches high temp about 100 C on one of 4 cores. Right now I am not sure if mounting pressure of radiator is correct. Radiator isn’t even warm, but it gets warm after 1-2 minutes without fans. On motherboard BIOS I setted option, that would throttle CPU if it’s gets hot.
So my question is how can I test CPU if it’s not damaged by eletrical system failure and if it’s even possible that failure causes overheating?

Radiator isn’t even warm, but it gets warm after 1-2 minutes without fans.

This is an indication that the pump might not be working. If your friend still has the box cooler for the 4790K I’d suggest swapping the AIO for that and see if the CPU reaches those temps. Most likely it will not, in my opinion.

So my question is how can I test CPU if it’s not damaged by eletrical system failure and if it’s even possible that failure causes overheating?

I’ve never seen or heard that happen. CPUs are VERY sensible to voltage and temperature so if the electrical failure gave the processor too much voltage, it would be dead. There’s rarely some in between situations, but they’re very rare.

cooler swap or repaste and give a bit more force to the screws a quarter turn at a time. also set all settings to auto or lowest possible voltage that will boot and run stable.

This is an indication that the pump might not be working.

Can you feel it spinning/vibrating slightly if you touch the pump/block.

Also does the BIOS/Monitoring software show an RPM for the header the pump is plugged into?

Ok, rebuilt computer for like fifth time. Each time apply new paste. Results are the same, core one 100 C. I am using this cooler: https://www.silentiumpc.com/en/product/grandis-xe1236v2-2/ , did everything by manual. Still can’t feel any heat on the cooler when fans are running. But hwinfo shows 100 C on core 1. I have feeling that cpu is somehow damaged.
Edit: I think I need to drink less. Not core 1 but core 0 has highest temperature: 100. Other cores has less ,20-40 C less.

Oh I see, its not water cooled at all.

Ah well then yes seems something is wrong.

Okay, it’s an air cooler. Radiator is usually a term used in watercooling, so there’s no pump involved. Still my suggestion is to try the stock cooler.

There’s absolutely something wrong, but having cores going at 60 to 80°C it’s not great either. These temperatures are recorded while the system is idling or under heavy loads?

What I think it’s happening is that the new motherboard doesen’t play nicely with the cooler mounting system, that’s why you’re having these issues with it. A damaged CPU crashes the system, loses one or more memory channels (if it has more than two), stops the system from booting, requires insane amount of voltage to run, can’t run RAM at the speeds it used to and so on but it doesen’t overheat like that. 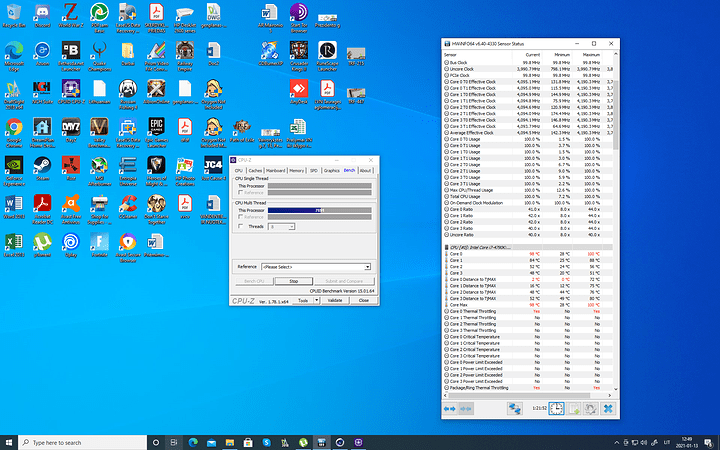 Under load. In my eyes cooler is mounted pretty tight. I could try put back CPU to old motherboard.

Unfortunately a few Nm of force that are not correctly applied can make a big difference so even if it looks solid it might not be correctly mounted. It might be too tight even.

I could try put back CPU to old motherboard.

If it’s giving you issues I wouldn’t adivse you doing that, it might kill your CPU for good. If you have the stock Intel cooler remove the one installed now and put on the stock cooler. That cooler has no screws or spings so it gets mounted correctly regardless and is always good for testing.

I will look at others computers, maybe I will find stock Intel cooler for that Socket.

So, after 3-4 of no work done with that computer. I can’t power on it. So there 2 things: I connect something wrong or motherboard is dead, because PSU is working.

Honestly I cant see someone fucking up mounting pressure to cause 1 core on that to be basically TJMax while the rest are correct temp. I would put money on the CPU taking a hit, could just be temp sense part of the cpu but I doubt it.