How do I crossfire an A10 6800k with an HD 7750? Do you just install the drivers and it does it automatically?

Then how are they doing it?

Stick in your 7750, go into Catalyst and enable dual graphics mode. If it is not there reinstall your drivers, restart the PC, and enable.

Would the Beta drivers cause problems?

-I have OP in skype.

I have reinstalled twice now and restarted twice. Nothing is showing up

I would have liked to see them test 13.8 drivers rather than the 13.6 but amd themselves told them it wouldnt have made much difference

Check under the performance tab, it should be there.

It's not there. It's not under gaming either.

which one is it detecting? try moving the monitor to the other display out

Its defaulting to the discreet card, when i put it in the other port it just goes black.

Try switching to standard view under the preference button.

Where would this preference button be located?

Below your close window button?

Yes it is posable but pointless.

crossfire lowers the higher card to the lowest card/apu and a 6670 is still a better card than the integrated video on a APU meaning even a 6670 is DOWN clocked to run in hybrid crossfire.

Allso any card that has ddr5 ram will be downclocked to ddr3 the same as the apu uses meaning your wasteing performance a 7750 will run better dedicated than running in modified hybrid crossfire.

Your forgetting the fact the overall performance will most likely be better than the single 7750 alone.

Thats why i'm doing it. and btw the crossfire option still didnt appear. Do i need to do something with my bios?

Funny you guys bring that up is was thinking about apu build yesterday. Something like this.

I have no idea then, just to try to experience your problem I decided to stick my 7850 to CF with my 7870. Apparently I didn't see the crossfire option till after I did a 2nd restart.

So here is my AMD CCC taken with Greenshot: 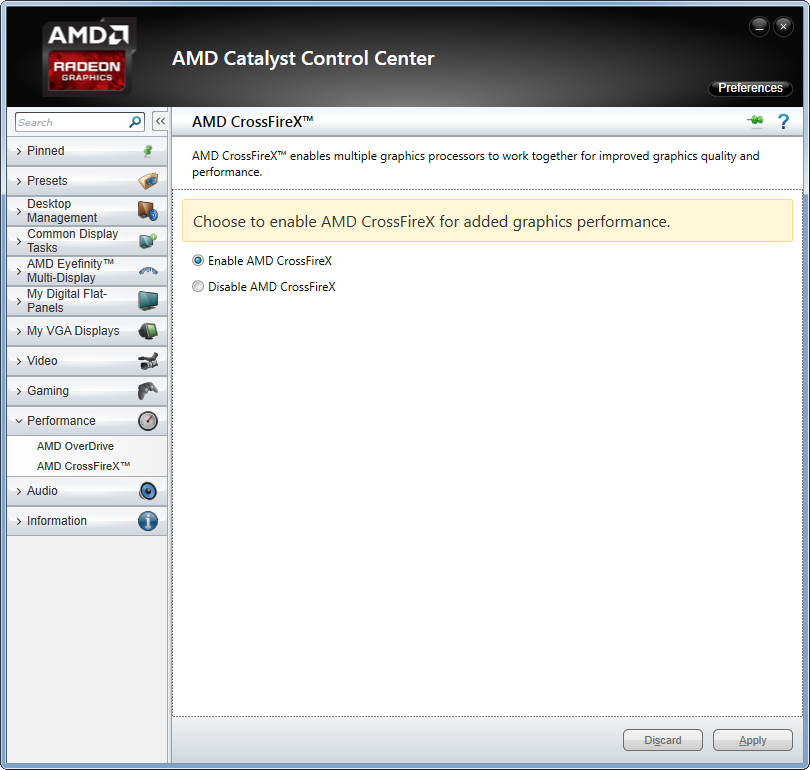