I have recently purchased two reference designs 290x's. No overclock other then cpu(FX-8320 at 4.5Ghz) and I have a full tower case with what I believe is proper airflow. CPU is water cooled and I have two intake fans on my towers front cover and one fan for exhaust at the rear. Two fans as intake on top mounted rad. 120mm x 2. When I play BF4 and only when I play that my game runs at the right FPS but after a while, usually after loading a new map my fps drops to 20 fps minimum and 60 max. My fans also turn down by a lot almost if at idle. Its as if my GPU's overheated and are throttling by a lot. Need help as this almost always happens when I play on the map siege of shanghai. I am stumped. Need help. I play on ultra 1080p 144hz with Mantle API, happens on DX as well though.

What are your GPU temps? Especially since they're reference models I bet they're overheating.

Well this happened before a clean re-install of windows and now after so I doubt its driver. Will get some fans aiming at the cards and see if anything changes.

but still 20fps is realy a big drop.. that couldn´t be right. Which motherboard do you have? Cause it seems to me there is a stability problem somewhere. or the CF is not configured correctly.

Advice i would give you, to take out one card, and look how it performs on a single 290x. if it performs well one 1 then take try the other one, just to make sure both gpu´s are working fine.

They are, both run at 80fps average when single used. I have an asrock f1tality 990fx killer motherboard. Seen some Intel i7 users have the same problem(don't think its a bottleneck) with these cards. It seems to be driver or overheating.

Why not use a utility such as hwmonitor (http://www.cpuid.com/softwares/hwmonitor.html) to tell us what temperatures your 290x reaches while playing BF?

Have not had time to use the PC since starting this thread, but I will do some monitoring soon and come back with the results. 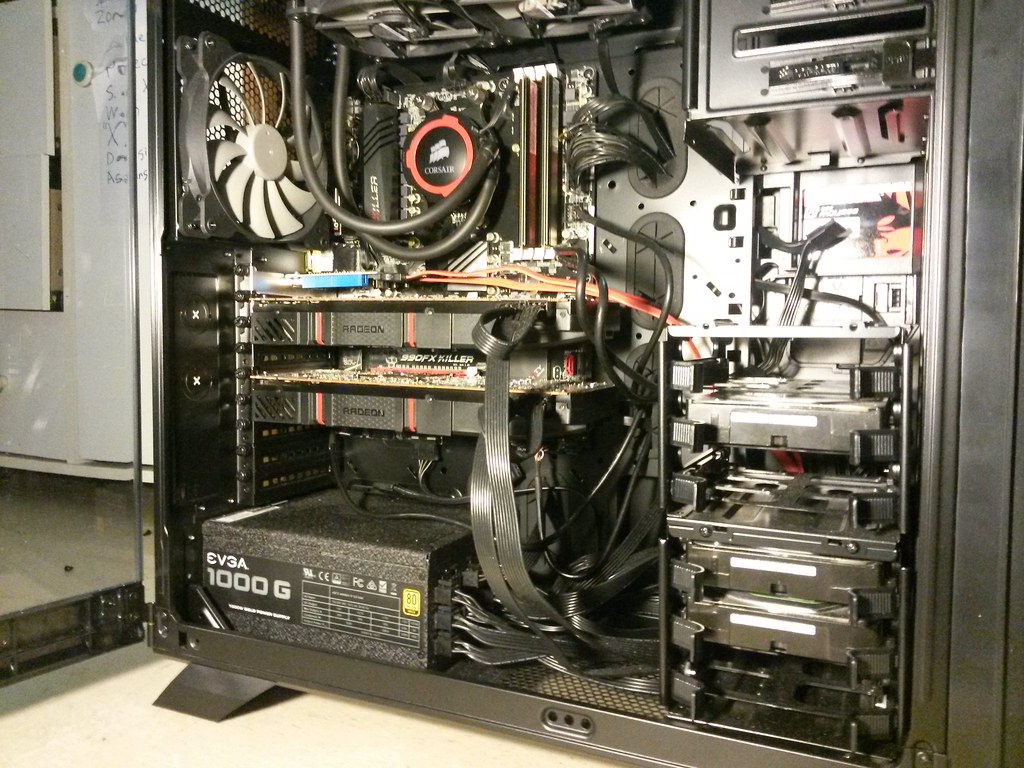 The 1st gpu will take a lot of heat (with your setup) - resulting in slow down of clock to cool it down.

Did you try to run from mantle? Same results on DX?

(Either way i'd recommend trying separate the cards a little.  Get pcie extension cable / riser and have gpu2 further away from gpu1.)

Ok , I own 2 290's , and to cool them adequately , I NEED to have a fan pointed directly on the side of the two gpu's , otherwhise they don't intake enough air .

That being said , overheating should not give you this problem.

do you also suffer from frame drops on a single card?

Cause the fatality killer, has some overheating vrm issues wenn overclocking the cpu. This could cause voltage throttle, since there is no LLC option in the bios to correct this, so this results in a cpu throttle.

So as a tip i would say monitor the temps carefully. including the mobo temp.

But offcourse it could also be a driver or CF configuration issue.

Okay I think the top card is bad. When testing along I got black screens for a few seconds at a time while gaming(did not crash though, the game is still running almost as if signal was disconnected, gonna test my displays cable though to be sure). Also screen flickering(was better when power limit was raised and fan speed increased). FPS was correct though. Now I have to test the bottom one. As for temps, max on gpu 0 was 92, and gpu 1 90. CPU was places at stock speed again for testing but during overclock with prime max temp was max 45. I disabled ULPS and it helped as one card(GPU 0) was clocked slower then the other.

Holycrap those 2 gpus must make a sauna out of your room. *shudder*

Hmm black screens does not sound realy good, could be overheating vrm´s on the card, or a Vram issue.

it does not seem to be cpu / mobo related then.

Yeah, just 1 reference 290x made me open all my windows in my room when it was like 2 degrees outside. I'm glad that thing died XD.