The critical thing is I’m using a M.2 to PCIE x4 adapter, then an ultra low profile PCIE x1 extender to get the PCI-E x1 port for the Ethernet card.

With PCI-E Bifurcation, is this at all possible? Is the Mini PCI on this board just like any other Mini PCI-E and it can just accept any card?

Edit: Revised because the board has no mini PCI-E.

Maybe I’m just missing something about that motherboard, but:

I could be wrong about the wifi, but it looks soldered on just like the rest of the coastline components. The screws are just there to firmly support it so it doesn’t snap off. So to answer your questions

I am a fan of tiny builds from computes to houses and more, but sometimes it simply doesn’t make sense. I’ve never seen a tiny house too small for for a full size PC, so it seems even less pertinent in most other instances. Many of the so-called Micro ATX boards out there are smaller than the 9.6" x 9.6" standard. For instance, I have a board that is 8.9" x 6.7". It gives you a lot more flexibility if you have a little more space and native connectors.

I know, there are thousands of Mini-ITX boards out there with huge graphics cards, and nearly every single one of those builds are a compromise and fraught with issues where it won’t go together the way they thought during their first attempt at assembly. Just something to consider. If you are expecting everything to ‘just work’ then I personally would avoid Mini-ITX + discreet GPU.

There’s screws to take out the built in WIFI. This is a picture from a teardown of another AsRock ITX board:

See how the screw holes face? There should be screws on the other side to literally take the module out.

Now look at the underside of the board: 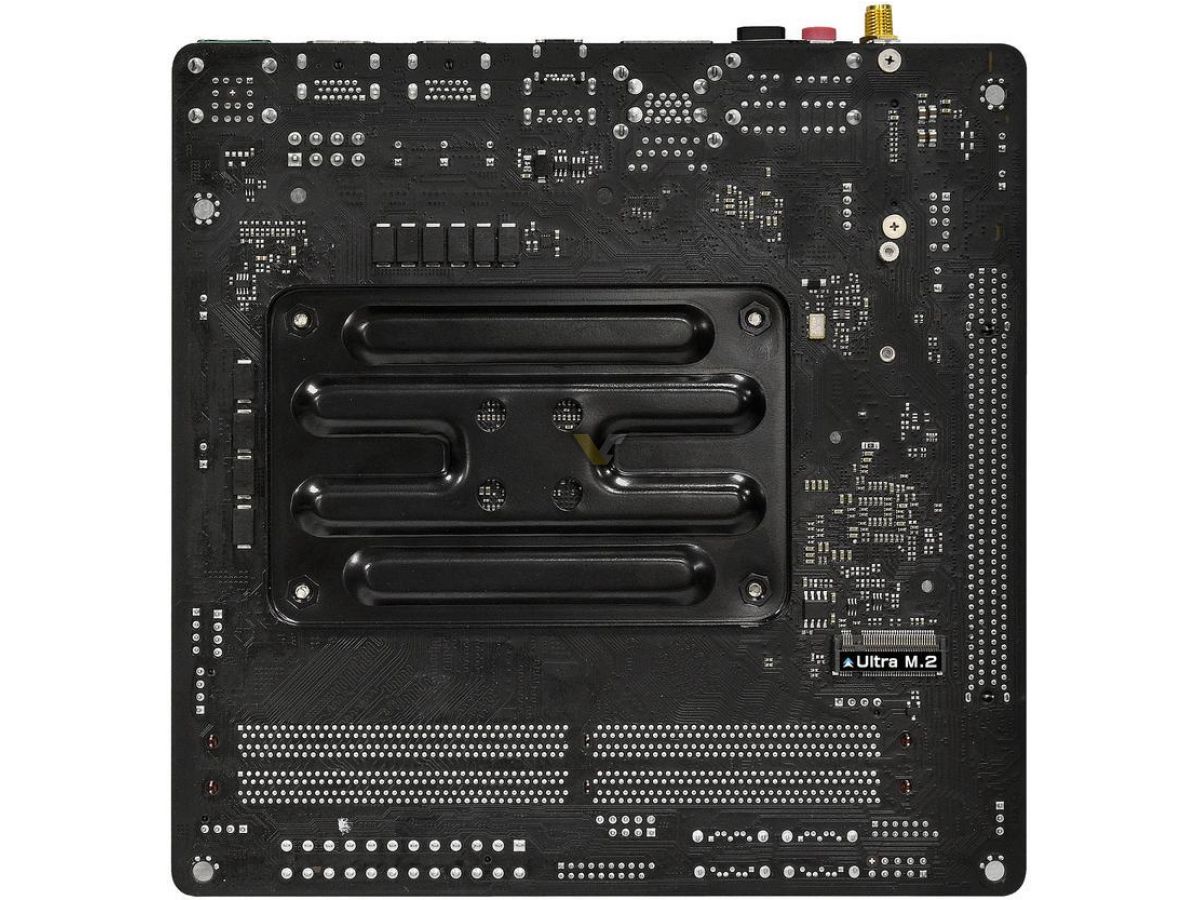 See the screws? Yes, that module can be taken out.

This part list has no M.2 drives. Only SATA.

The reason I’m going with a x16 slot bifurcation is because all Ryzen mATX boards are electrical x16 and x4, not x8 and x8. This allows x8 and x8.

There are no mPCIe slots on that motherboard, so you’re going to need different adapters/extensions. The WiFi card is an M.2 A- and E-key I believe.

As for bifurcation I don’t see why it wouldn’t work, but with your parts list I’m not sure what needs x8/x8? I know almost nothing about virtualization, but I know that GT 1030 certainly isn’t going to saturate x8 PCIe 3.0 lanes in normal use.

Okay, looking at other boards, looks like it’s a M.2 vertical slot for the WIFI. Darn. This was an earlier revision using the backside M.2 port:

I want x8/x8 so more pins can spread the load over the PCI-E electrical link power delivery to the GPUs. (NOT the 6-pin or 8-pin, the actual slot itself electrically.)

Really curious to know if this project works!

I am fostering a liquid cooled VM mITX plan in my brain but I have little on the side of the software experience, but would likely be all AMD.

I wish I could, but I make lists without the funds to actually test it. I was gauging the waters to see if someone would be interested to undertake this list to make a Ryzen mATX passthrough machine.

https://pcpartpicker.com/user/urmamasllama/saved/9bLd6h (+ a 1070)
behold my new rig. having some weird issues with lspci but other than that the system runs perfectly.
I wanted a smaller case but project orthrus isn’t out yet

edit: just noticed you were the one to comment on my issue thread. still haven’t tried pci-stub yet. probably next weekend.

But yeah, it makes more sense to me just to use an actual mATX motherboard. Cheaper and won’t have to use adapters.

Build quality on those apparently isn’t as great, and the only way to get electrical x8 and x8 is to bifurcate the x16. Not a single Ryzen mATX board is x8, x8 and x4.

I’m still not sure why the requirement of x8/x8. x8 is the data bandwidth, it has nothing to do with the power it can carry. All PCIe slot power is from a few pins that come before the key notch, so any PCIe slot whether it be x1 or x16 are spec’d to be able to put out 75 watts for each slot on the motherboard.

So using the ASRock AB350M Pro4 as an example, there’s a slot for two GPUs and a NIC. Everything fits and has the requisite PCIe slot, but it comes out to less than half the price of the aforementioned X370 motherboard and adapters. This would theoretically be even better in terms of power delivery to the cards since each card has its own slot and is not sharing the power delivery by effectively putting two cards in one slot.

Hearing bad experiences with that Mobo, and I wanted to challenge myself to use an ITX mobo for passthrough. Bifurcation seems to make more sense for the GPUs and the M.2 adapter is more for the extra NIC. The Define Mini C should provide plenty of room (more room than a Nano S) to work with the passthrough GPUs. I could also get a riser cable to add a more powerful dual slot card to extend the 2nd x8 away to use for the host. If I wanted a RX 570 for the host and the GTX 1080 for the host, Bifurcation would allow that. with extra bandwidth. I’m thinking about room to grow.

I just put in a single slot card for now just to be sure for slot compatibility. If I find out while building (or someone else building it) that 2 dual slots and the NIC work to occupy all the slots, then that’s likely what will be done.

Found a Google Doc on SmallFormFactor forums and right now, I still stand to be correct that not a single Ryzen mATX board does x8/x8:

It seems like the AsRock bifurcation method is the only way to get x8 and x8. Would also be curious if you could do 1070 (Ti) SLI with that.