K, so, of course something went wrong. But it worked out.

my new "card" doesn't actually fit in the slot I wanted (too many components on the motherboard between pcie slots). in fact, because of the coax post and Dell's fancy pcie mounting design (there's a solid bridge, with a latch, over all four pcie slots on the case) it doesn't actually fit in any of them. fortunately, was able to remove the bracket, install it first, and then screw the modem back into place afterwards. 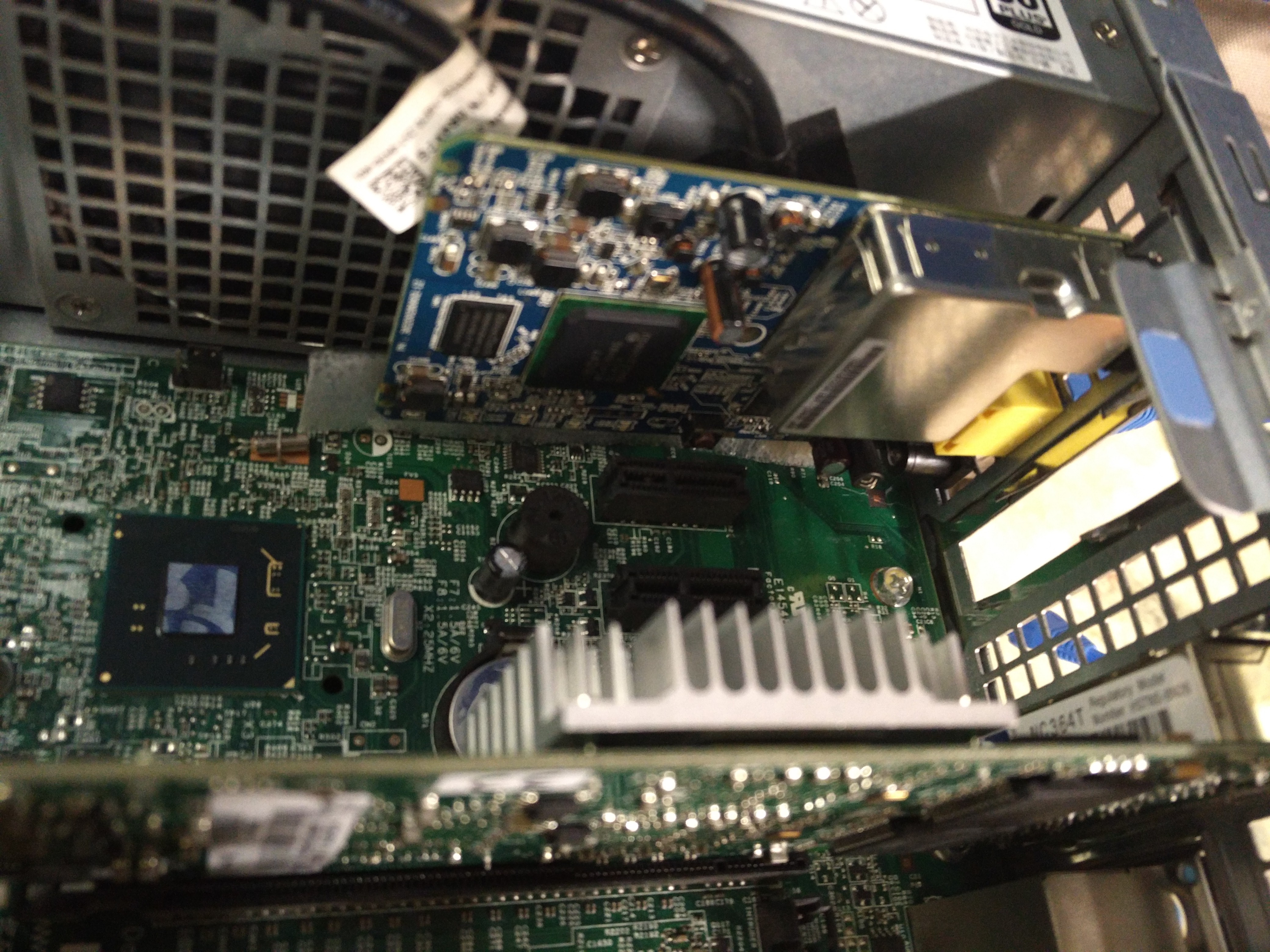 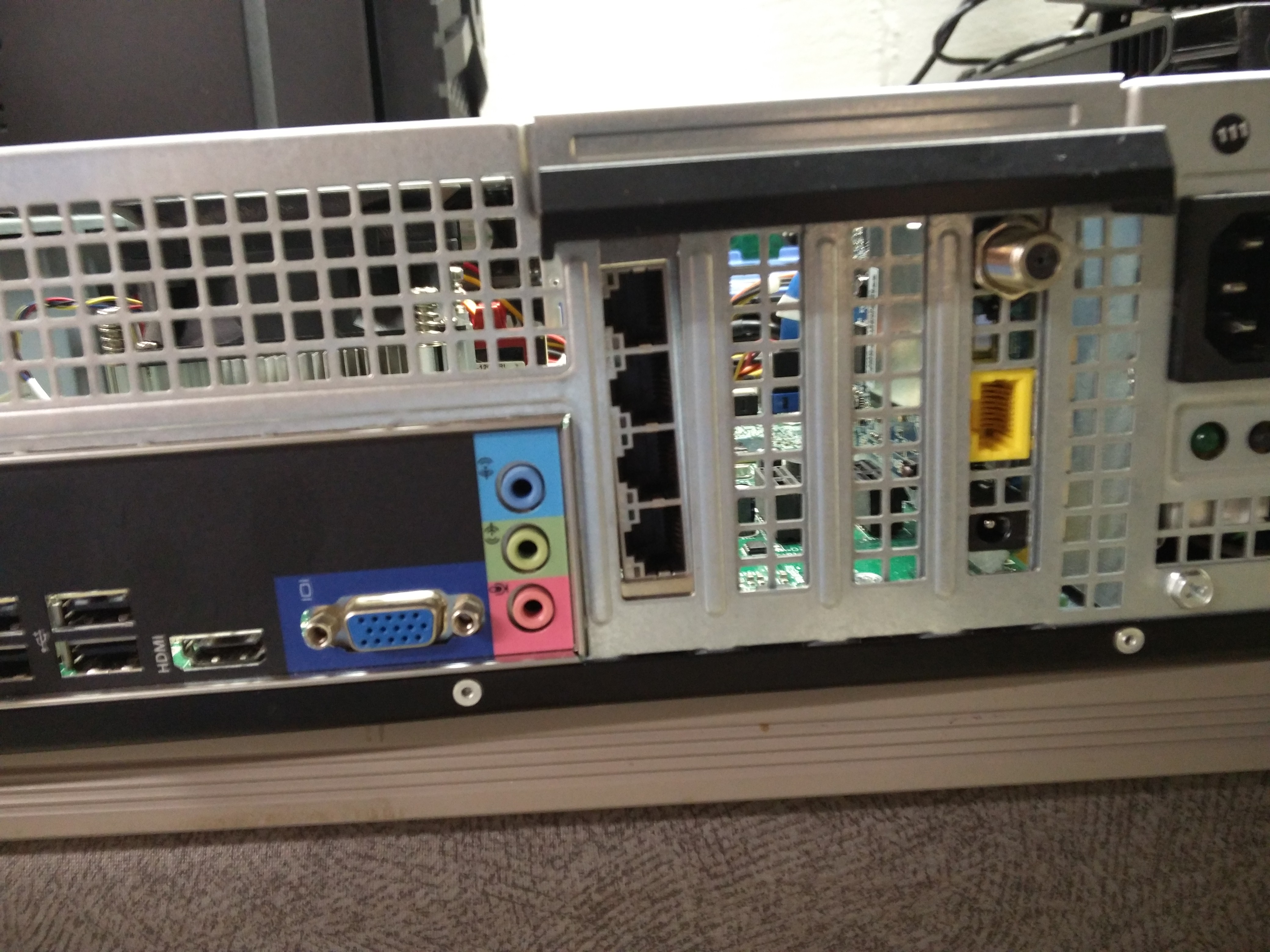 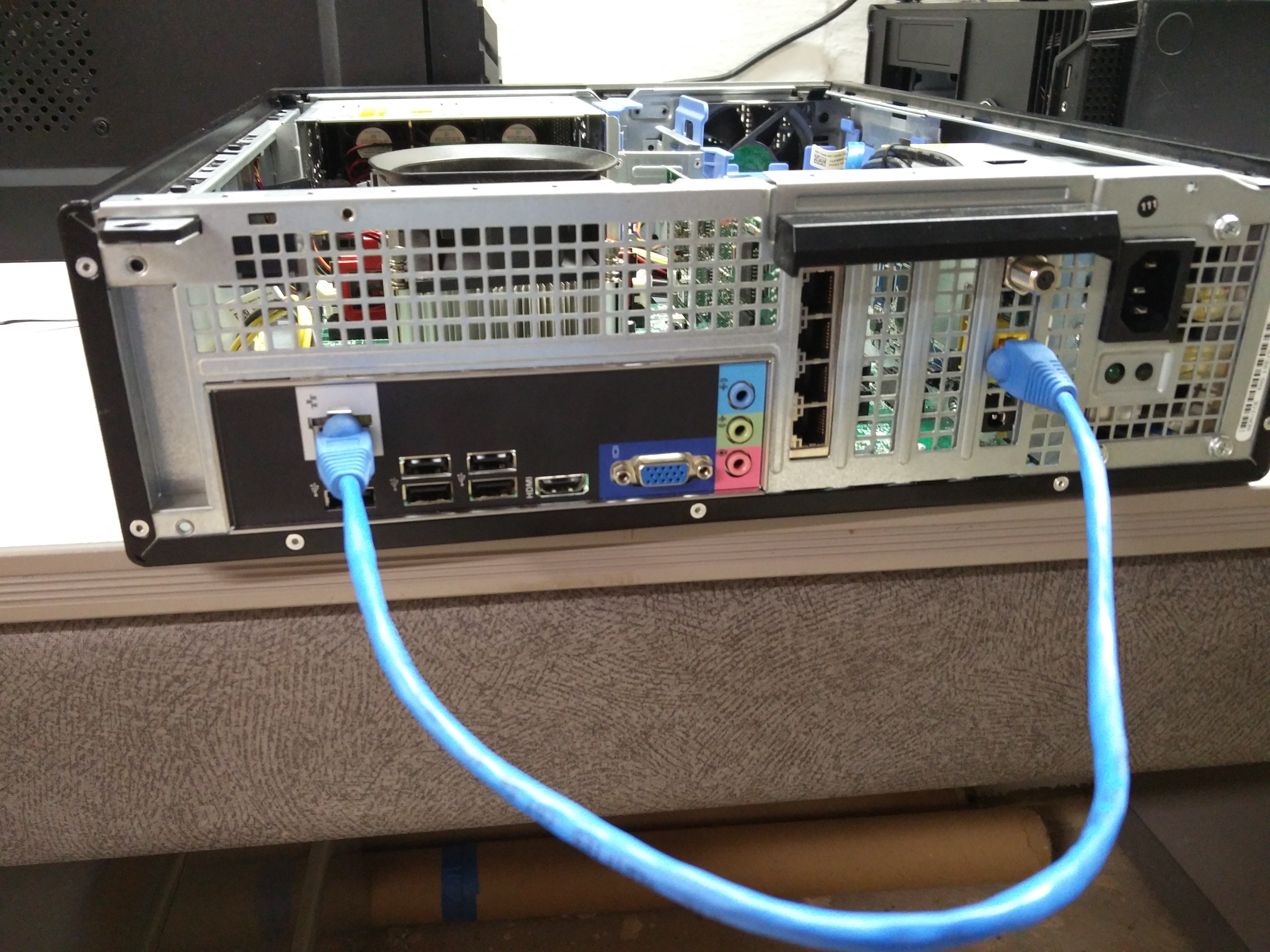 All the pretty lights!! 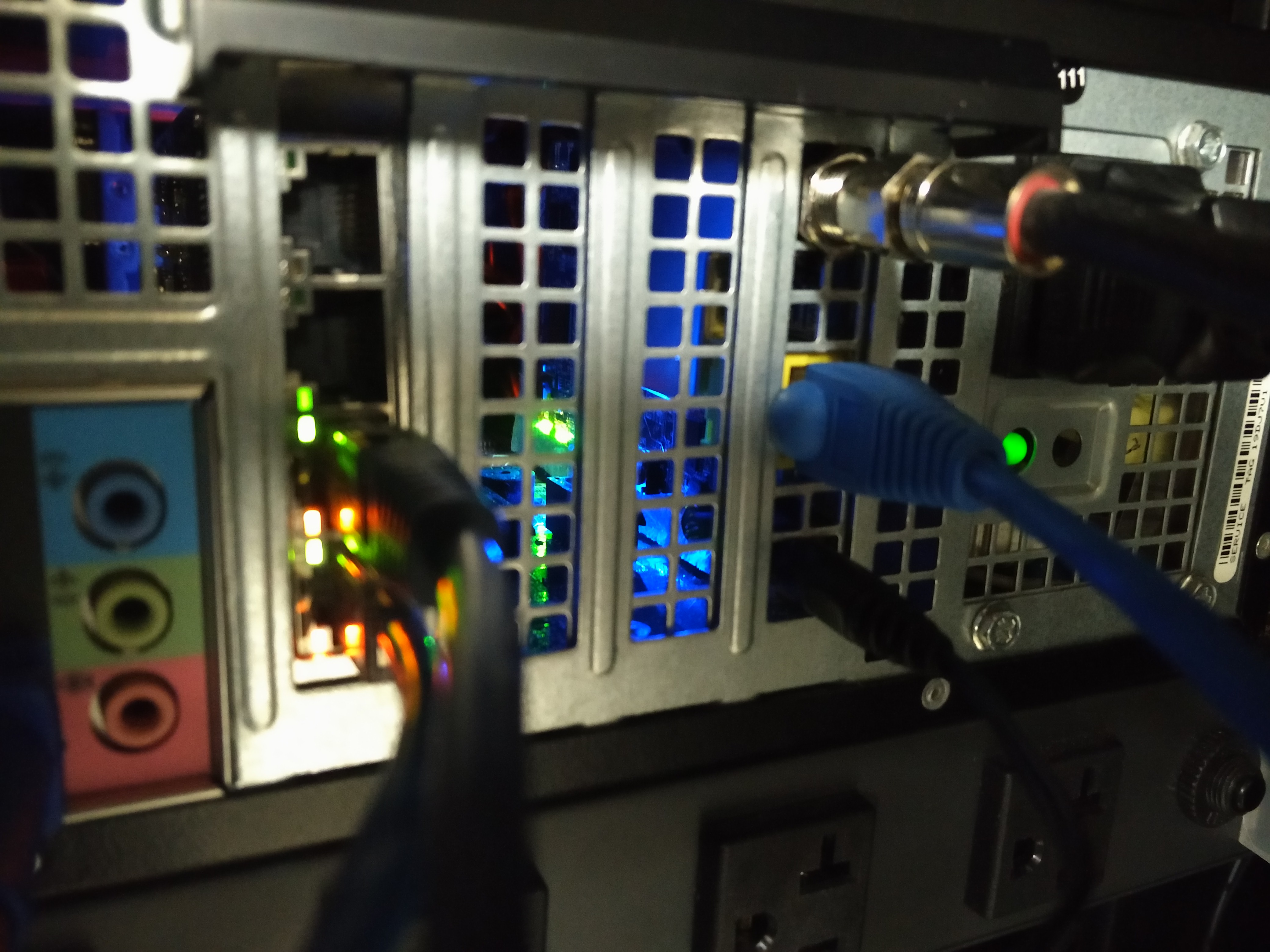 found a box for it, btw.
had to remove the shroud because the cpu cooler mount was incompatible. I am getting a new gpu (maybe? it's a surprise?) for xmas, so my 750ti will go here and this will be my new htpc downstairs. 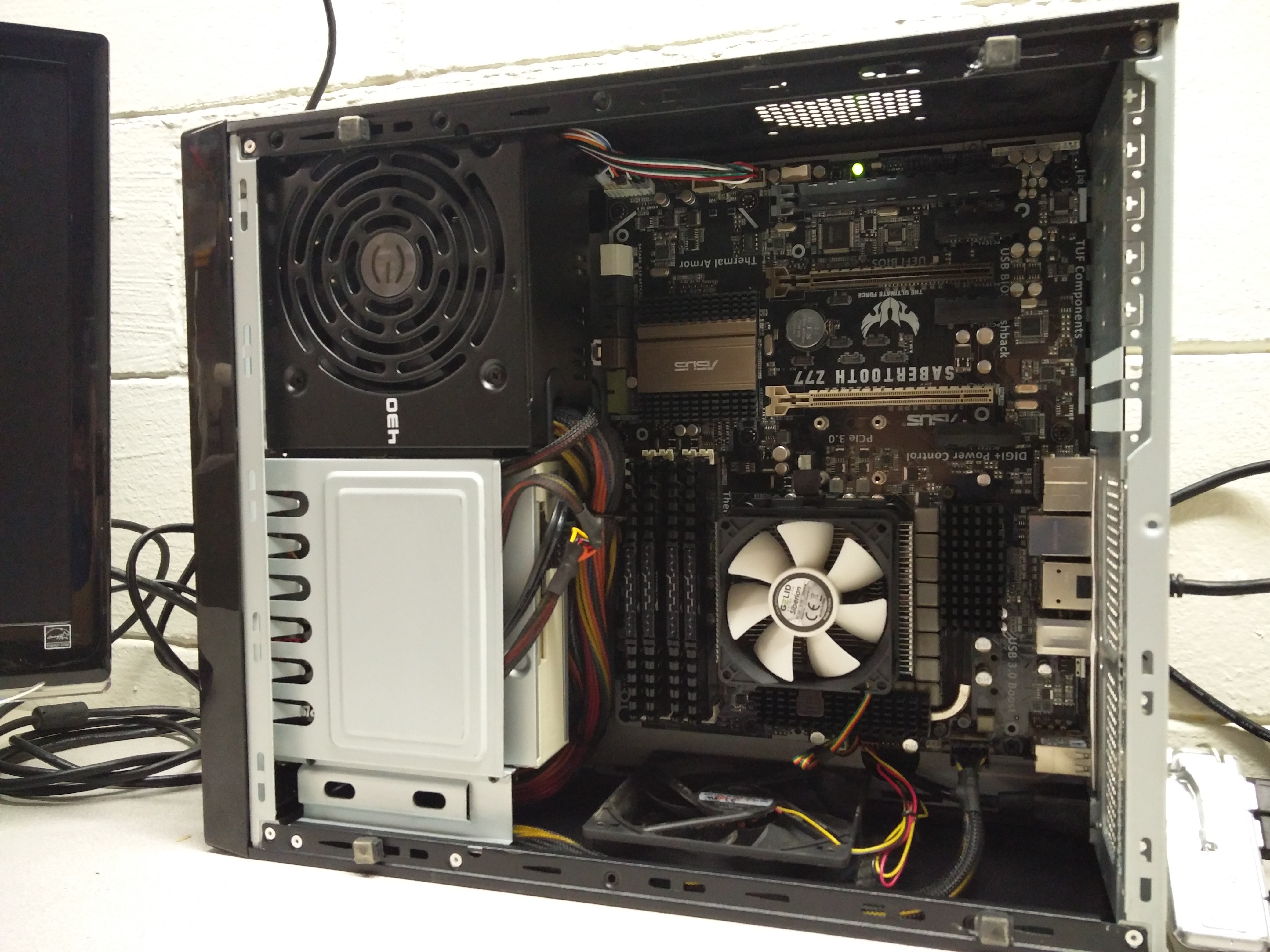 I intend to copy this.

got cable now. the modem is working great, no issues!

Selling on craigslist is kind of a pain, but I've recovered a few bucks.

You are going to have to take a major hit on price, 1/3 the original cost or less. I refuse to deal or bargain on price because I am already pricing it fair, low and a steal for the buyer. But I have been known to price it $20 high and lower it a week later. You never know who's watching. ;)

You are going to have to deal with scam artists trying to rip you off or "do you want to trade your valuable stuff for a stolen camera?"

You are going to have to deal with moronic lookie-loos that want you to read them every minute specification. "I listed the part number. Look it up yourself on Google." I am selling a SteelSeries keyboard that clearly says in the ad 'THIS IS NOT A MECHANICAL KEYBOARD" the guy calls me, interrogates me with questions and says 'sounds like a nice mechanical keyboard, I'll buy it' Uh... it's not mechanical. A sleazy man would have lied.

And one thing I have learned is trying to sell components is hard. Last time, I went to the thrift store, bought an HP case from the 1990's for $10 and stuffed my old gear into that. I sold the complete working system quickly.

yeah. i've never sold anything. i listed an old laptop once but no one bit. majority of the time, i'm on the buying end.

I'm in SoCal and IMO craigslist kind of sucks keeping in mind how huge the area is-- you'd think there would be deals a plenty from the many well to do people- and when it comes to selling you have to practically give it away. Since I'm in no rush or pinch, I end up just sitting on the components. And omg how I hat low-ballers, when your listing something mint for a tiny fraction of what its worth and they want to deal it down even more- I don't have time for that and its a pet peave (I'm that white guy that can't bargain and gets totally taken in other countries).

Not that I'm saying its 100% suck, I've gotten some good stuff, and found a home for some stuff, just keeping in mind the geographical area, expected better.

I downloaded the 'letgo' app to give that a shot.

I'm in SoCal and IMO craigslist kind of sucks

Totally understood. I was in so cal (inland empire) before i moved, same experience. I would probably never list on craigslist expecting to get a good selling price — just something better than packing it away in storage.

Interestingly, despite the good deals I've gotten on computing stuff in the Indianapolis area, GPUs seem to be a major exception. People want retail+ for GPUs that they've been using for 3-5 years. :p

Being a car guy, I've found better / more car stuff in the Inland Empire haha- just seems to be a healthier scene there.

In frustration I've just put stuff outside to be taken away for free (I live on a busy corner) because I'd like to reduce clutter and not horde things. Thought I'd get $10 here, $20 there for items worth hundreds and its just such a PITA on Craigslist I just put it outside haha.

I don't know what the offer will be but I was imagining I'd draw the line at $150.

Selling on craigslist is kind of a pain

This has been my experience with trying to sell on Craigslist. Insanely annoying tbh, bunch of people looking to get something for nothing or scam you.

I'm careful to not ask for info that's included in the description. Sometimes what people write isn't terribly clear, unfortunately. I'd rather waste a bit of time with an email than an hour or more going to pick up something and then passing on it. And email gives you an idea of what kind of person the seller is (I had one guy who complained about every question, refused to let me plug in the item to confirm it worked (because they said it worked in the description), and last minute told me to make sure I brought my driver's license because they were going to hold it while I was in their house. I canceled).

I can say the same. I once picked up an i7 920 for the x58 chipset for $120 and i got a pretty crappy asus sabertooth x58 motherboard on ebay. I ended up moving to z77 then now z97 cause my z77 motherboard riped

I started to watch Flea Market Flip and the contestants on the show do the same thing. And in an episode Laura explained why. She said that towards the end of the day the owner of the little stand may accept a lower price and it becomes a win win situation because then the store owner does not need to load up that item into his or her van and you can get a bette deal by asking what they are selling it for. Even tho it is clearly written on a tag.

So I think maybe people on Craigslist ask, hoping that the owner will change their mind on the price. But of course if the item was only on the net for a couple of hours, minutes, or days I would understand your pain.

Ad said it needed parts+repairs. Three error codes on boot. However,
- one code was because it has two (redundant) power supplies, and they only plugged in one to test. Plug the other in (or take it out), and this goes away.
- next code was about the cmos battery being near dead, so bios settings, clock, etc. wasn't sticking. Turns out it was just in bad contact. Take it out and re-seat it; it's fine.
- third error was about the perc6/i battery being dead (it really is, but whatever, i can grab another one sometime). 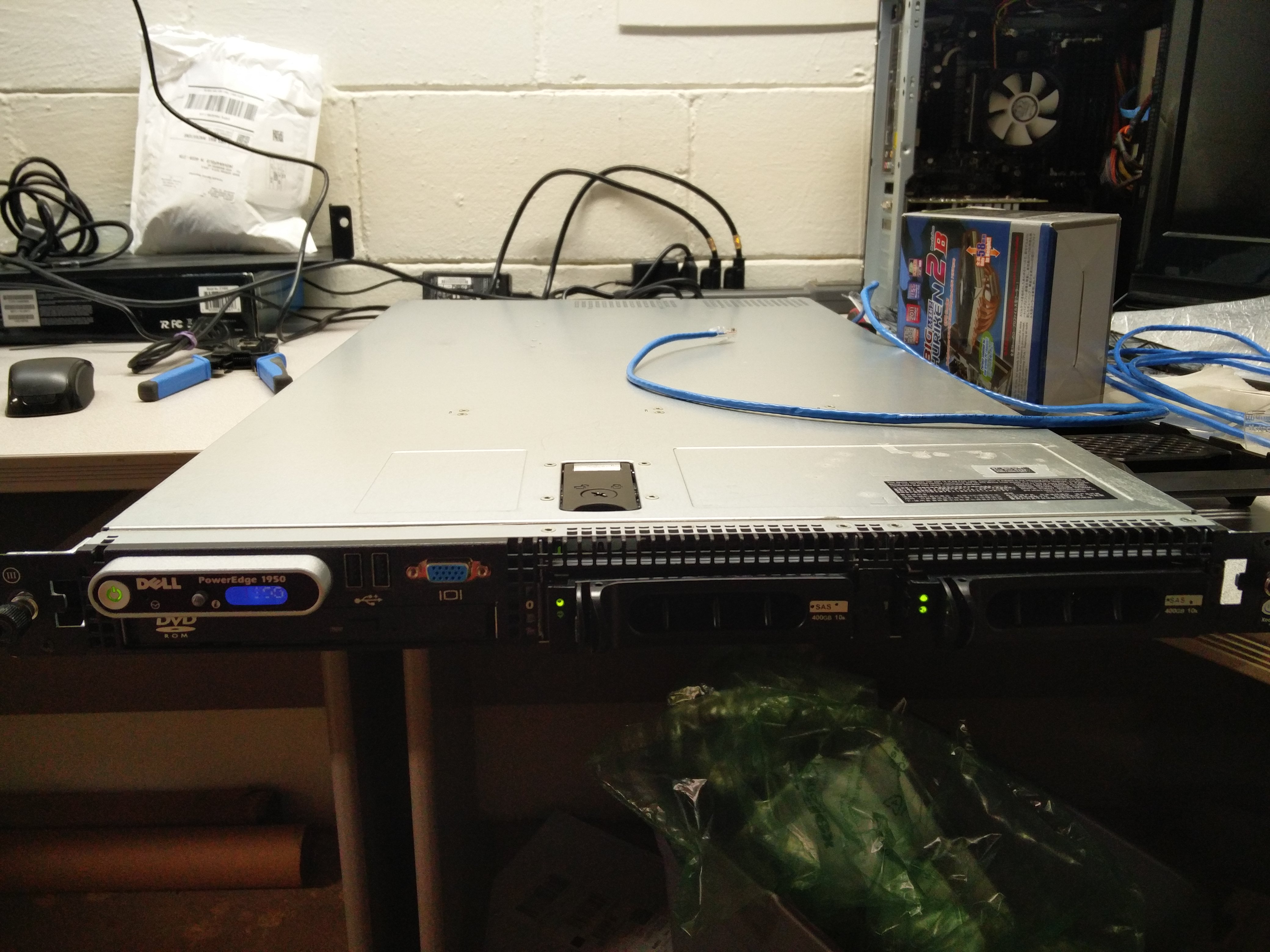 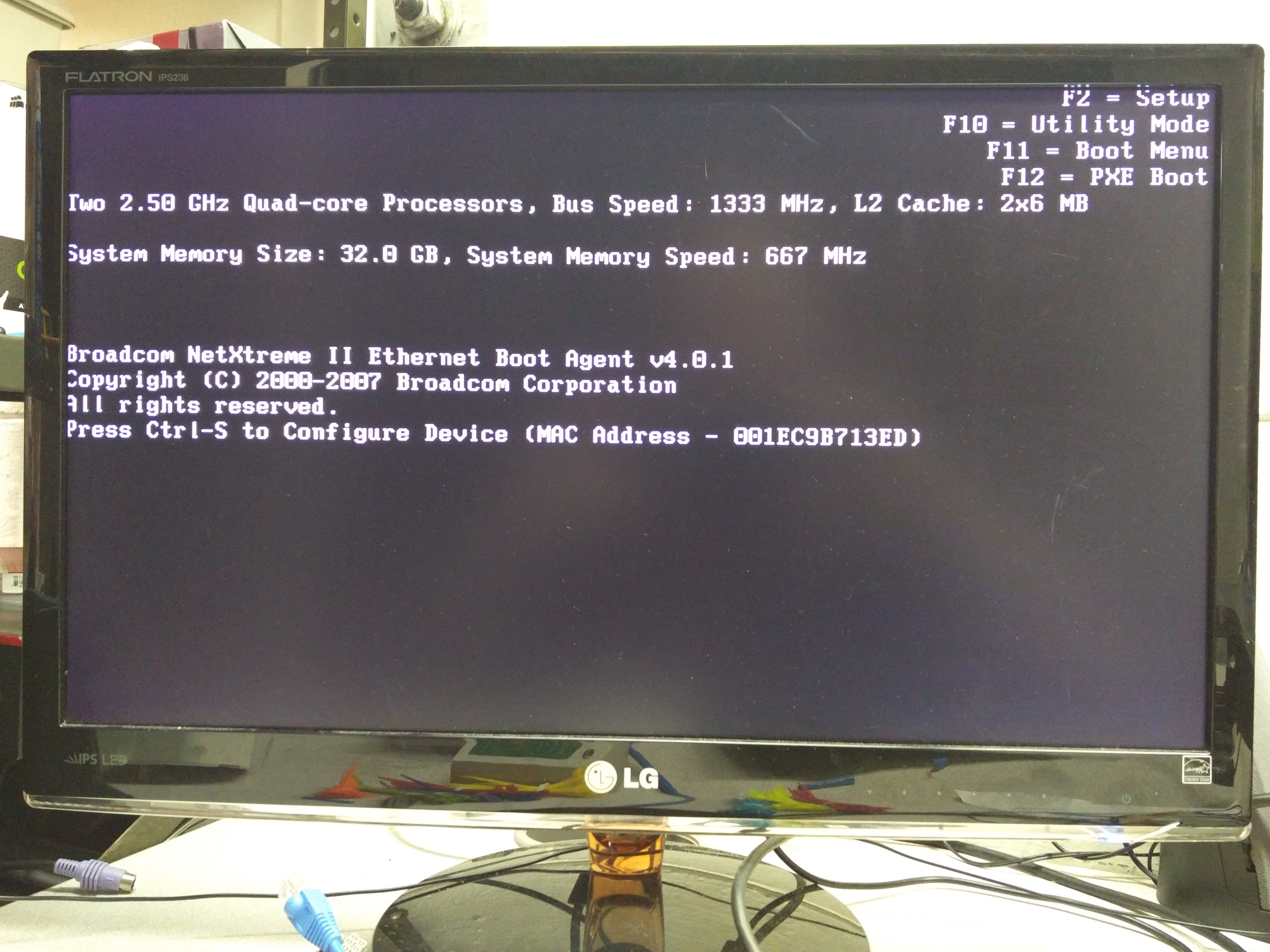 This one might end up in colo as the public side of my home network. But haven't figured it out yet.

So, to break from "what I got" and do a little "what I'm doing with it"

Pulled these two out of the rack to get them working.
I'm not completely sure what the issue was, but it took a long time to get them talking to each other. Had to clear out the raid configurations several times before i could even see the disks. 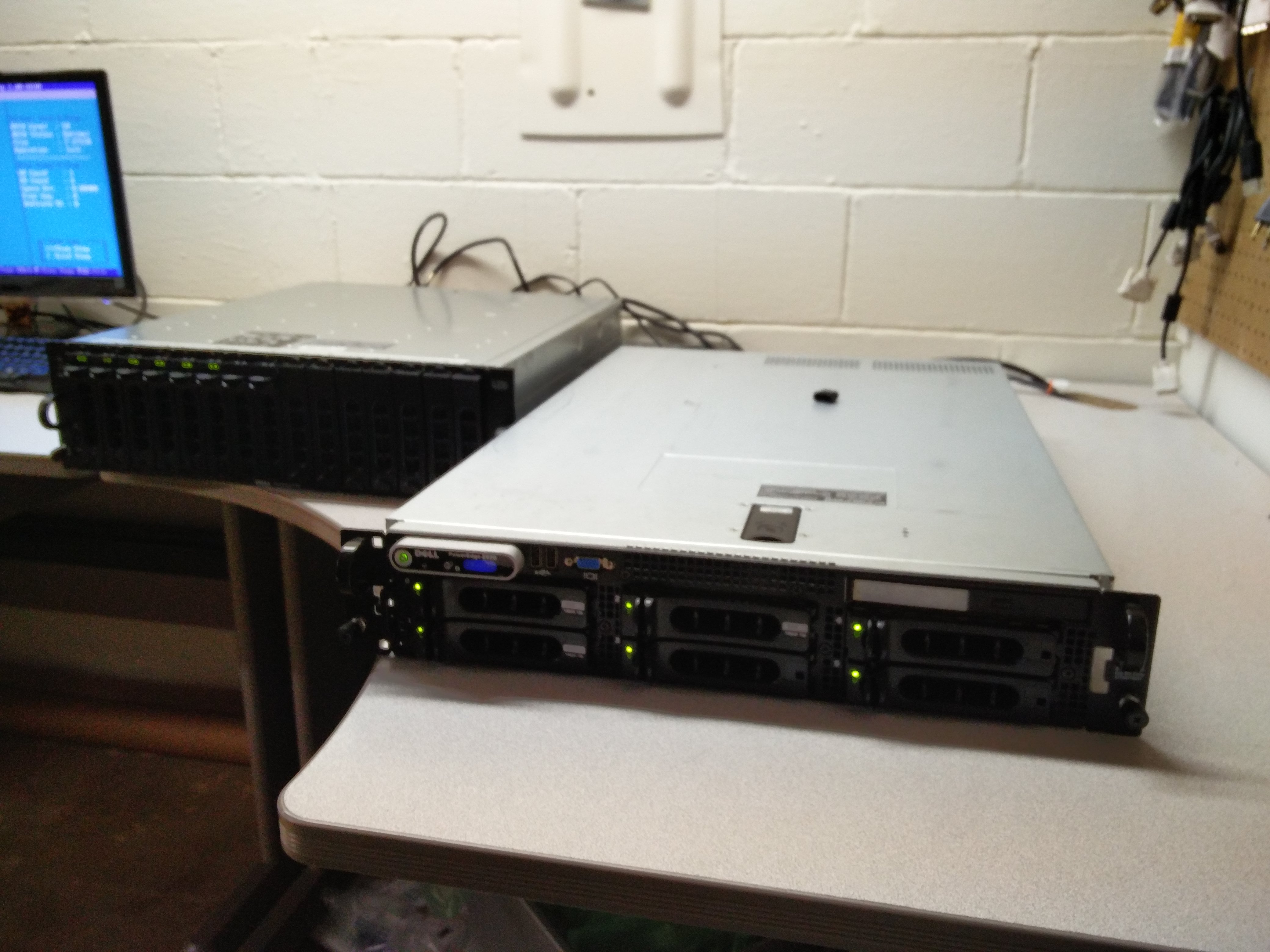 Yay! The lights are all flashing (green)! 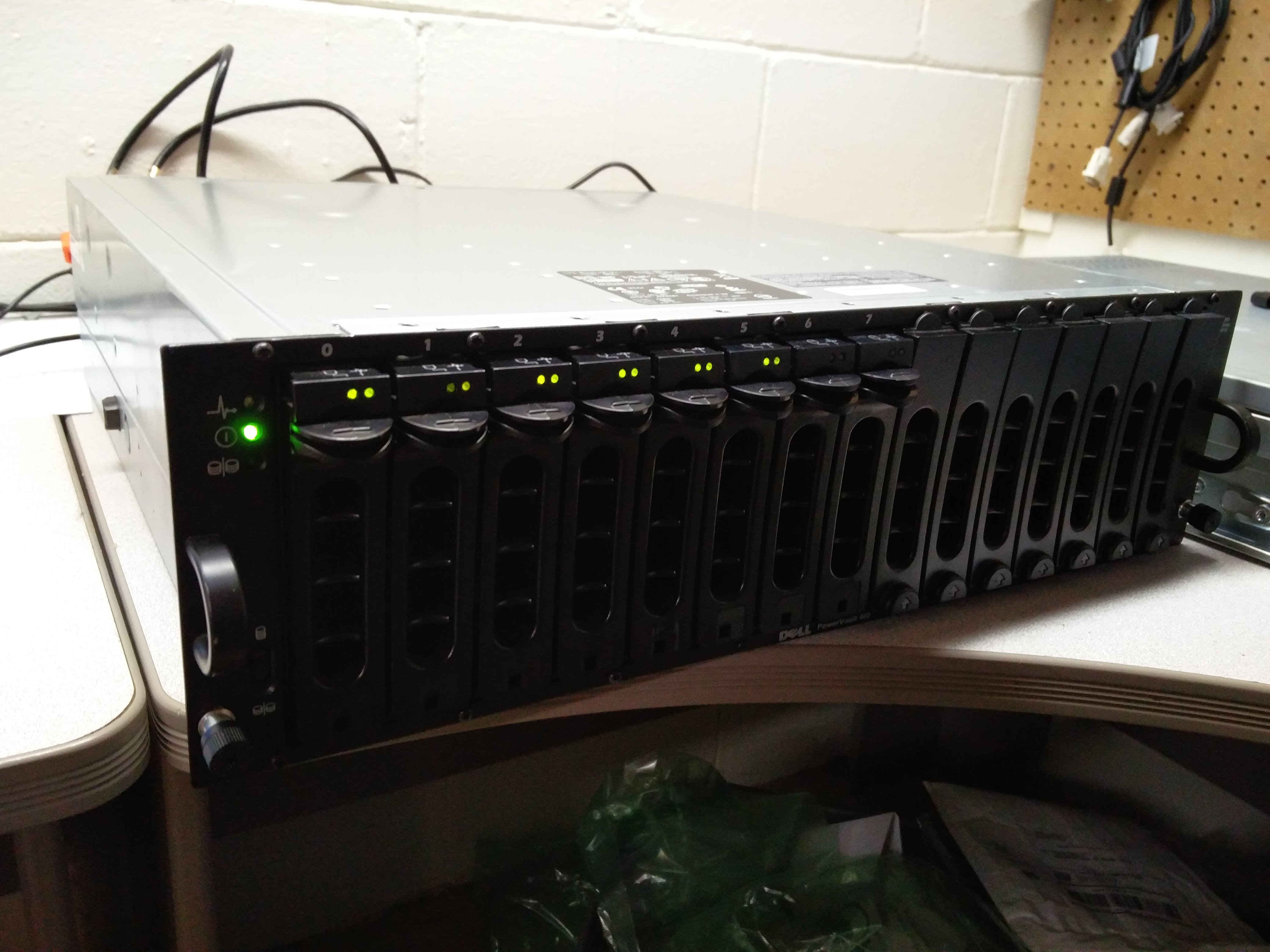 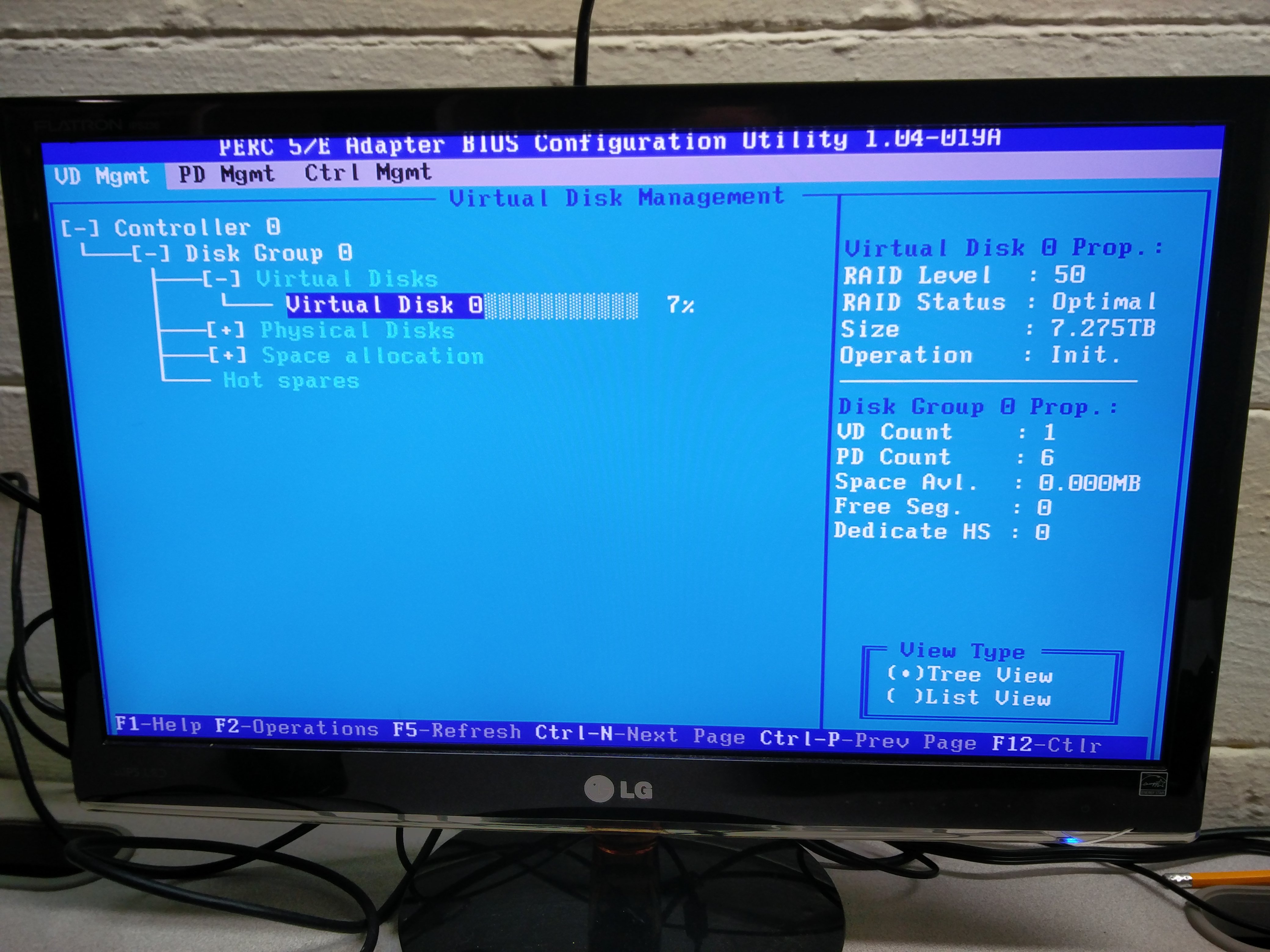 In the configuration utility, it only tells me that the SMART status is "optimal." Once it's done initializing I'll see if I can load up some tools that tell me more.

Anyone have experience with Windows Server 2008? Is it worth keeping a copy around? I don't plan on using it here, but I cracked the password so keeping it is an option. The license is valid.

So, if I could grab this, think I should do it?

Advice? I don't know much about HP servers / Opterons. Specs look good though. and each has a 300gb sas drive.

YOU ALL LEFT ME TO MY OWN DEVICES,

Yes, this was a Craigslist deal. A (somewhat local) power company at the end of their 5-year equipment cycle. I anyone is in central Indiana, be aware they’re still selling: a couple R710’s, a couple Proliants, three storage shelves and a bunch of switches. If you can’t find the listings, PM me and I’ll get their contact info for you.

So, pictures forthcoming. I need to rest a bit.

I wish I had a blade server, but I don't know how to set one up. :(. So owning one would be pointless.