Could the Windows 10 bootloader spy on my Linux installation?

Ok, I don't know much about how bootloaders work but I'm trying my best to migrate away from Windows for mostly security concerns.

I can now do most of my stuff in Arch behind an AWS OpenVPN, my own smtp server to reduce tracking by 3 letter agencies but I'm still using the Windows 10 bootloader to boot into Linux because I've been having some troubles with Grub detecting Windows. (Sadly I still use Windows for gaming)

This might sound paranoid but Is there any possibility that the Windows 10 bootloader could detect any metadata about my Linux installationr? I've already gone so far to prevent these assholes from selling my data and I'd hate to stop this close if the bootloader can gain any information about what I'm doing in Linux.

I would say that would be highly unlikely.
However with grub did you try to boot into Linux and do an os prober at the terminal?

Yeah I don't see why they'd bother doing it, the number of people who use the Windows bootloader without using windows would be tiny. Yeah Windows 10 comes up it just wont boot into it when i click it.

The bootloader is just loading the Linux kernel and than goes completly off, it's done. Also the structure of the Linux kernel is way different than the Windows one so even if it could spy it should somehow be able to understand what's going on, which looks impossible to my eyes really. I think you can sleep tight.

Even if you would load Windows at boot, chances are that Windows won't even be able to read the more advanced linux filesystems, and will just consider the whole linux part of the machine unpartitioned volumes.

I mean if it really bothers you, you can just encrypt the Linux partition, but that will cut you off from file access without some kind of program plugin

yes but no.
would be possible but windows would have to support a decent filesystem like ext4 or btrfs

Windows can't read most linux supported filesystems, so you should be in the clear.
If you really want to be safe just encrypt your filesystem, which would render it unreadble unless properly logged in.

Windows can't read any Linux FS without 3rd party utilities. It can see that a partition is there and Hyper-V if present can most certainly mount a physical volume formatted by Linux - into a VM running Linux.

The disk is not mounted into Windows and as far as any Windows Services are concerned it is off-line. If you have to run Win 10 Pro/Ent as your main OS, but want a secure and private place to do some work, it's an option. That's not to say that it's not possible to hack into a VM from the host OS, but I think it is very unlikely and the major distros have accepted the Microsoft drivers into the kernels for use with Hyper-V/Azure so it must theoretically be secure - Zoltan could probably confirm on that. 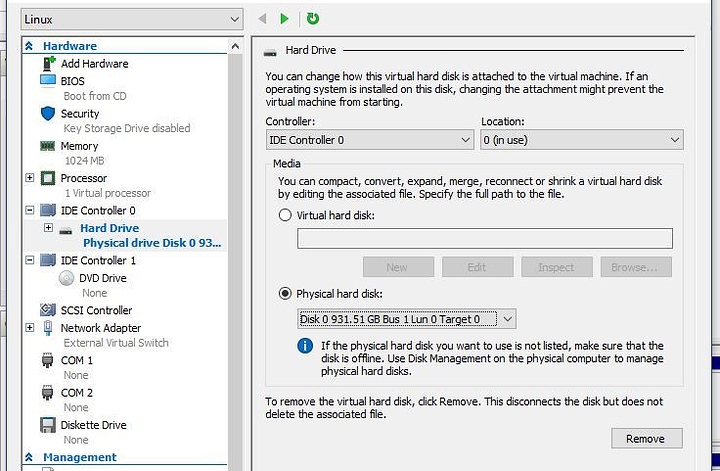 EDIT: Just to clarify on this a little more - in this set-up Windows 10 is not really a host OS. Hyper-V is a type 1 hyper-visor and the main Windows 10 install that boots is in effect a VM itself and therefore isolated from the Linux VM.

Too make it interesting Ubuntu can be part of Windows.
...and who knows maybe one day Cortana becomes self aware and teaches itself EXT2/3/4 format.

Use LUKS encryption on your Linux install. That will be the end of any snooping.

Yeah this is good advice for paranoid people. Technical its possible if they really wanted it, but i don't see Microsoft that desperate.....yet

Technical its possible if they really wanted it

They would have to log your keystokes before mounting the HDD so they could get your password, or have a copy of the drive header in case you have a NUKE option and still need the password to decrypt the drive.

nah Windows just starts a brute force process secretly in the background trying to unlock you're disk :p and every time you push shutdown it saves it state were it was left XD