Could GTX 1070 be Nerfed Too Much Considering It's Not a Refresh?

Coupled with a 256bit bus width, a GDDR5 (none X), and it's memory already clocked to the highest a GDDR5 can go, it's weakest spec is bandwidth. So, when advertised as being on the level as Titan X which has 30% more bandwidth, will Nvidia's claim still add up given the how their claim of 1080 being faster than 2x SLI 980s is semi true?

Where I see this card compensating is through driver optimization (Nvidia will likely neglect Maxwell anyway, just like Kepler), memory compression, and core OC overhead beyond its boost clock. Can this really make up enough to consider as an upgrade?

Tech YES City shares his concern at it's real world performance and, thus, not to be a "true sister card", and Price-to-Performance ratio in relation to Nvidia's new pricing scheme here:

If these concerns hold merit is it possible that this is the reason why Nvidia focused mainly on 1080 during the reveal? Your thoughts?

Well the reason Nvidia touted the 1080 with such ferocity was to give people "upgrade fever" (which too many have already fallen for and far more will in the coming weeks, dumping 980Tis for $400 to "upgrade" to a 1080 etc.). 1070 will most likely be another incremental upgrade like the 1080 causing AMD fanboys to facepalm, Nvidia fanobys to fap, and the rest of us are left like ¯_(ツ)_/¯. Of course Nvidia will use driver optimization and neglect in order to make it seem like the 1070 is a huge performance boost over the 970 (which imo isn't that spectacular a card to begin with and certainly doesn't warrant it's "most popular card ever" standing especially when compared to the 390) because it will get them more sales, thus increasing their market share, publicity, fanboy count, etc. And people who actually know what is happening see the evil and very harmful precedents that Nvidia is setting here. I'm glad to see the disgusting levels of hype for the 10xx series has died among the more astute in the tech community and hopefully this will lead to less biased reviews in the future (one can dream right?).

TL;DR: I believe the 1070 will be like the 1080: nothing more than your typical incremental upgrade hyped out of proportion and when it doesn't live up people go meh (one of the things that pisses me off... AMD's 3xx series launch was very similar to this and AMD caught hell for it while Nvidia is celebrated. Makes me want to do this: (۶ૈ ᵒ̌ Дᵒ̌)۶ૈ=͟͟͞͞ ⌨).

I'd like to add that I think this card will really struggle at higher resolutions. We have seen that the 1080 already does (just like Maxwell before it) and the lower memory bandwidth certainly won't help. Compression can only get you so far. That, coupled with the poor DX12 and ASync performance we are seeing as well will really make this card a tough sell. Especially at the prices they are targeting.

The faithful and the ignorant may buy it but I don't see much beyond that.

Also does anyone know if 1070 has the fancy VR tech that 1080 does? Assuming yes but I don't know for sure.

I don't understand how you can call something crap that we haven't seen yet. If you are at gtx 950 even the 970 would be massive improvement not to mention the fact that the 1070 is going to be faster then that. But Yes wait for AMD's offerings it will drive down the price as it usually does.

Looking at the slide:
2.5TFLOPS less than the 1080
less bandwith due to use of GDDR5 non-x
So yes, it is an upgrade from the 950 and the 970 is aswell. But Pascal is basically 16nm Maxwell with the performance benefits of the new process, nothing earth shatteringly new "architecture" overall.

Why are we all sat here crying about a card that isn't even released? Wait until the card is out to reviewers. Speculation doesn't mean shit, just wait for the damn numbers to come out.

AMD's 3xx series launch was very similar to this and AMD caught hell for it while Nvidia is celebrated.

its only 63% the price and in 80% the flop performance has 2x the amount of vram as its predecessor, Which was the same as the jump from the 770 to the 970 , and everyone is giving the same marginal improvements across the board so why would nvidia bother since they are ahead. They can just do what intel does and give a <10% improvement in most cases and still be in the lead. they did the same thing for 700 series and the 900 series and AMD proved that they couldn't keep up with their release of the 200 and fury series. 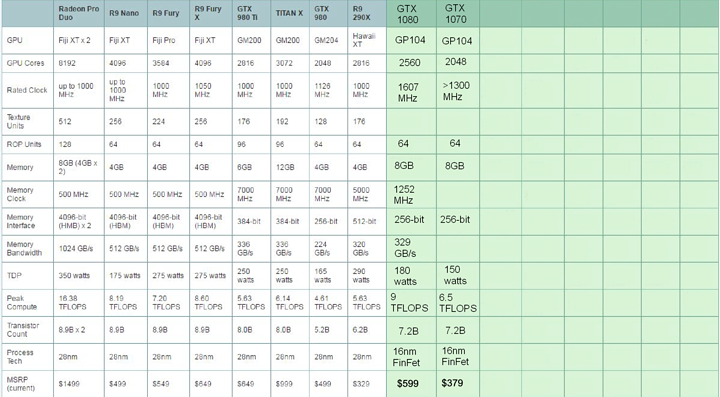 That said, the r9 390 was a great card for the money that was performance wise superior to the 970.

That said, doesn't change the fact that it was a rebrand.

What lead? DX11?...Sure, but mostly they trade blow-by-blow. But DX12? And, Vulkan? That's a completely different race.

rebranding isn't bad as long as the price goes down and performance stays the same or improves. Hell till last generation nvidias mobile cards still had Fermi based stuff being rebranded in with new stuff.

And the 1000 series is a rebrand on a new process, still same features (except the software that could run on 900-series cards just aswell).

Wait until the card is out to reviewers. Speculation doesn't mean shit, just wait for the damn numbers to come out.

Agree, i realy dont get all this nonsense either.
Wait untill the card is released and its performance benchmarks are showed.
Then the numbers talk.
To me the GTX1070 is still looking a very interesting card.

Its not though. the architecture is different. Its like you expect them to design a completely new core type with every new gen of cards. You build off what you have. The tick tock cycle that intel did is the same thing. You have a new architecture that you release, then drop the node size to improve power efficiency. Its the same thing and people go crazy for new intel CPUs. 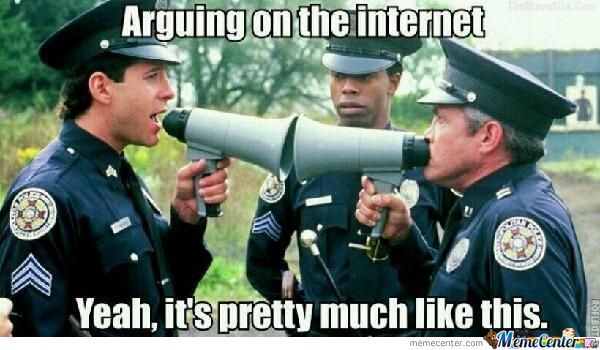 The faithful and the ignorant may buy it but I don't see much beyond that.

the problem is, there are too many of those if not the majority

worth noting that the official TFlops is actually lower than what they said it was in the 1080, who knows how much the 1070 really has