Could a hot router CPU cause randomly slow connection

Alright, my internet the last week has been alternating between blazing fast (60mbps) and excruciatingly slow (<1mbps), so I assumed it was the firmware because i had the same problem on a different router before this one (Current router is Netgear R6250 by the way). Anyway, I went and installed dd-wrt on it, but its doing the same thing to a lesser degree, and under the status bar it says the cpu of the router is at 85C, and too me knowing that is pretty warm for a computer cpu to be running all day, could this affect my internet speed? Also, how might i go about cooling this if this seems to be a culprit for the slowing down of my internet? Thanks

I just found out you can underclock the cpu, I underclocked it to 600mhz (Default 800mhz), and the temp only dropped to 83.5C, which to me means that these high temps might be normal? Please inform if I'm wrong, or if you might have an idea why this is happening

A router is designed to function properly from the factory they are most of them passively cooled . With that said, 85c is a bit warm.

So I previously modded my Cable Modem to add an 80mm fan to it, and decided to do the exact same...

You have a different problem it is not the router firmware.

What kind of internet is this?

How many other people use this?

What times of day is it slow?

Do you by chance have Charter internet?

What do you mean what kind of internet? Wireless or wired? Both slow down randomly. ISP? Comcast Protocol? AC, 2.4ghz and 5ghz bands both slow down

I'm wireless and wired, both slow down

No I don't use charter internet

Ok well first thing first you need to make sure the line from comcast works correctly this will be very difficult for you since you have a lot of devices.

Do the hoppers go out to the internet?

you need to connect straight to the modem and test it that way. you can leave the router plugged in just plug a pc into the modem be sure to reboot the modem when you do this so that it knows that it needs to connect to a new device.

is that the level of the cable internet signal or your wireless signal on the router?

the numbers i gave are for the cable internet signal.

wireless signal, how do i check them for cable internet signal?

is it possible that the temperature is just wrong?

But it is different then those um, it can be different for different brands, if you have an android phone there is an app called fing that can show you every device on your network, that should tell you what the modems ip address is.

once you ge the modems ip just put it in a web browser.

other wise it might be on the modem as well

like mine at home is a motorola surfboard modem the default address to the web interface is 192.168.100.1 it opens this page

on this page is what normalish levels look like 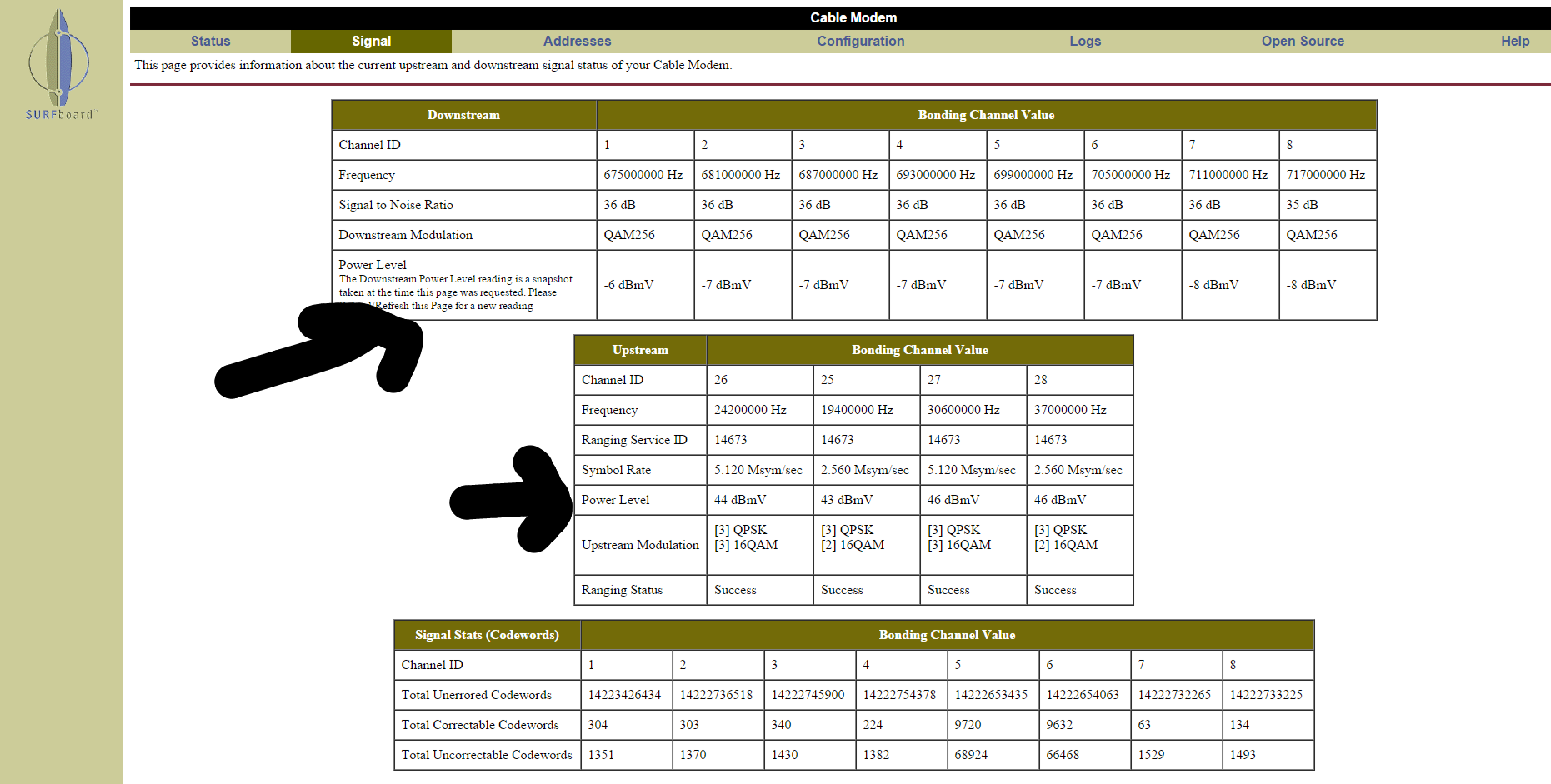 altho it looks like channel 5 and 6 have a slight issue. judging from the uncorrectable code errors 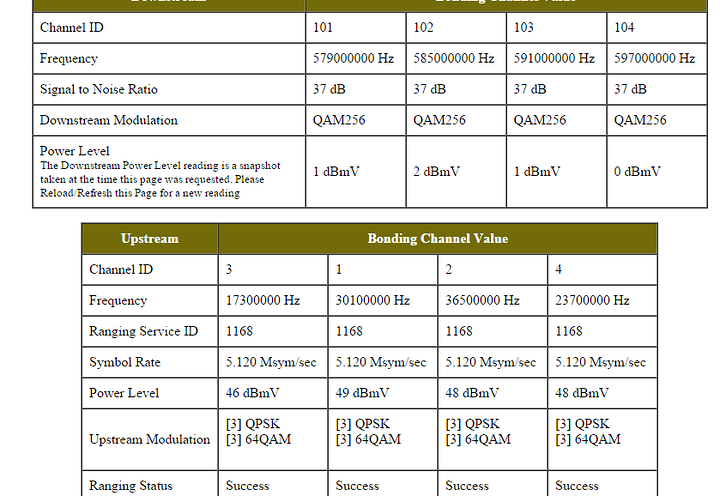 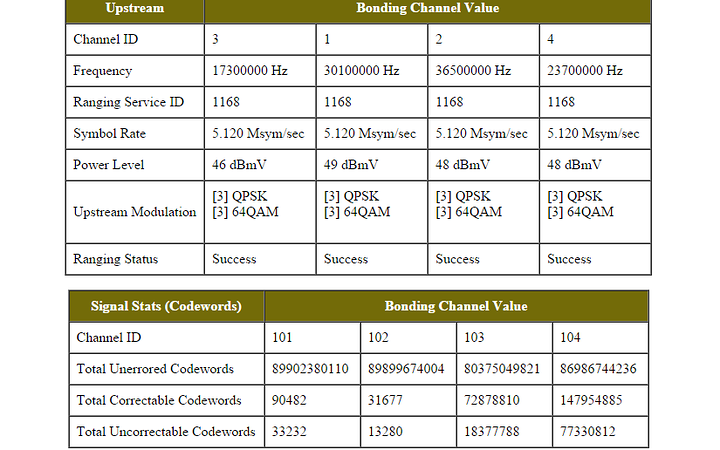 That doesn't look bad how long has this modem been on for? should say uptime somewhere

Also, does this sound at all plausible/probable... I don't remember where I read it but somewhere online said that the r6250's default firmware limited it to use only 1 cpu, so maybe dd-wrt unlocked the second cpu and instead of displaying two cpu temps, it combined both of them?

I am not sure of that, I don't really know the hardware of routers.

your upstream signal is a bit high, if it were to fluctuate any higher 50 it starts to have issues 55+ and usually it doesn't stay connected to comcast anymore it would start to cause issues, does the modem ever go offline like you lose internet and the modem has the power led and then another led is flashing right next to it from time to time?

Not that i've ever noticed, but it's a possibility... would restarting/resetting to default (i don't think i've changed any settings anyway) fix this?

You shouldn't really have to reset the modem but it might not be a bad idea. The modem doesn't have settings you can change.

The only way to know if it is the router or the actual internet is to disconnect the router from the modem and plug a computer directly to the modem and use it for a period of time (average time before you used to see the issue) and if you do not see the issue then it means either a reboot fixed it, or it is a problem with the router.

since you have so many devices I would first try to just reboot the modem. just pull the power for like 15 seconds then plug it back in. then you'll have to just wait and see if the problem stops. before you try the other test to see if it is Comcast issue or the Netgear router issue.

At this point there is not anything else that i know of that you can test besides the two suggestions above. or you can have a tech come out and check the comcast lines, the modem can say it is good but there could be a ton of ingress(SNR) in your house or on the exterior line.

Alright, I'll do that now.. Thanks for all the help and I'll try and give you update in a few hours or maybe tomorrow if it fixes it, but if it doesn't fix it I'll probably be back rather quick

ya keep me/us updated,
just a note: I do not work/worked for comcast, I used to work for charter fixing this stuff a lot, both of their systems operate the same tho, cable internet is cable internet.