I am looking at both now because they feel within my price range but I am still drawn a little to the NH-d15 for its higher rpms otherswise I am kind of stuck here.
anyone ever do a comparison in real life of do I just go of the data provide?
p.s. not really drawn to the led cause I am not sure about my new pc having them as well as my gaming one, mostly cause its not about fashion for me just use.

The NH-D14 beats the V8 slightly on the load temps here, and completely on the idle. The NH-D15 will do better than the NH-D14 obviously, so if you're looking for straight up performance, NH-D15. Apparently it's pretty loud too, which a noctua isn't really going to be... because, well, it's noctua. 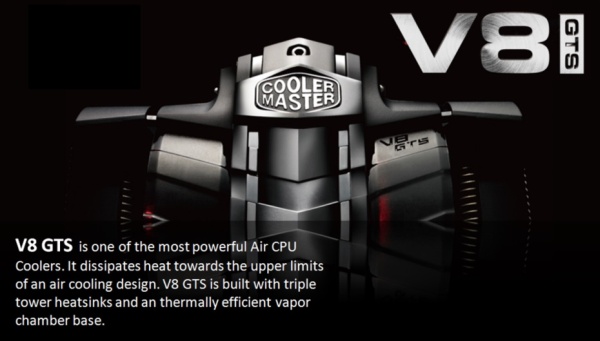 Today we will be looking at Cooler Master V8 GTS CPU air cooler. This is a compact triple tower cpu cooler with 2X140mm fans in the middle. It has a look of transformer robot face and has red LED lights. It looks very good and is one of the best coole...

CM v8's are terrible coolers. Take off all the optimus prime plastic rubbish and its 3 small towers & 2 very average fans.
If you can afford a noctua cooler - u12,u14,d14 or 15 then grab one. Pure quality. Low noise and great performance.

You can easily grab a second hand unit too, Noctua stuff lasts ages.

While Cooler Master makes some good entry-level products, but when it comes to quality and performance, look elsewhere.

The Noctua NH-D15 is one of the best air coolers on the market at the moment. If you are willing to spend the money on it, do it, and don't look back.

If you are spending Noctua money also look into Phanteks and Cryorig.

D15 is better.
Phanteks PH-TC14PE is also a nice cooler, you can get it in diffrent colors.

this is going into my system with a lga 2011 I7-5820k on a rampage v extreme in my corsair 900D that I am moding it to do some wonderful airflow with some heavy pwn control so really like these choices.
if you guy have any more ideas please let me know.

Never tried the V8 but I can vouch for the Noctua. It's an awesome cooler. It's easy to install despite the size (probably the best mounting system out there) and it performs like a boss.

If I had to buy a cooler right now, it would be the D15 or the U14S. You just can't beat the noise/performance ratio these cooler bring.

I'm just going to throw it out here Cooler Master makes some of the best high end coolers on the market like the Neptune 280L for example. The V8 is a decent performing cooler, Logan even had one on one of his builds awhile back, That being said it is not as good as a Noctua D15. The V8 is about looks, It's performance for its cost is really not on par and it's loud at higher fan speeds. If you are looking the best air coolers look at Noctua, Phanteks, be quiet!, Thermalright, so on. The Noctua D15 and the Thermalright Silver Arrow extreme are about as good as air cooling gets, they are on par with a 240mm AIO water cooling kit the V8 and the Phanteks are just a little below that level of heat dissipation.

These 3 coolers are all pretty close to eachother in terms of cooling performance.
The Phanteks is exaly the best of those 3.
The Noctua NH-D15 is a newer improved version of the D14, and its better then the Phanteks.

D15 would be definitely my recommendation,
But dont expect any fancy high overclockings on a 5820k with an aircooler.
i think 4.2Ghz / 4.3GHz, will be about it.

If you realy want higher overclocks like 4.5GHz or up on a 5820k, then you realy going to need a decent Liquid cooling realy.

Or a custom loop setup.

Don't forget the cryorig R1 ultimate. ;P
You've got to sacrifice some RAM slots though.

AIO Water Cooling solutions are dead to me.

AIO cooling is neither a good alternative to a full custom loop nor better then air for overclocking as in reality you will gain no meaningful overclock over air on normal processors. AIO's simply cannot perform at the level a real water cooling loop. Where AIO's really shine is for GPU's and very high TDP processors like LGA 2011, 2011-3, AM3+; so for more normal usage your mileage may vary.
Reasoning
In high TDP situations air cooling can't keep up thus requiring a better medium I.E. water. This is not really for overclocking it's a simple matter of cooling. An AMD 9590 is a good example of this. For GPU's the higher heat tolerances, stronger VRMs, and dynamic clock speeds, make AIOs ideal. As AIO's pull heat faster, and can dissipate more, at 300 watts or more a GPU would be still be running quite cool under water and could overclock to over 9000.
Don't let something die just because you aren't using it right!

so I hope this doesn't sound stupid our you saying I should go water cooling because I am using a 2011?

I'm not going to throw in a powerful argument into the mix, but Jerry's new rig (Barnacules) is a 2011-V3 system using Noctua NH-U12D4 coolers. That system is being used for for more than you, me, or anyone else will be doing with their system. It also isn't cabled like a rats' nest and has some modifications to improve airflow.

Personally, this need for watercooling a stock 2011 system is just pure hogwash (sounds like a sales guy using bogus marketing techniques). I've personally reviewed Noctua heatsinks in the past, and dollar for dollar, they perform like they should. If they didn't, high end builders like Puget wouldn't be using them and neither would I.

Now do you really need to overclock a 5820K? If it's just for prestige, be my guest. However, that chip has more processing power than any normal user would need.

just asking wise no fight.
I am interested in trying out some over clocking cause it is a unlocked chip would you say maybe I should water cool?

The NH-D15 is rated to handle a slight overclock in combination with the use of a 140W TDP processor. They also rate it to handle the TDP of an FX 9590 at 220W. Noctua puts a lot of R&D behind their product, unlike CoolerMaster, so I tend to trust what they state in their specs. Yes, I have RMA'd CoolerMaster products on various occassions.

If you know how to properly work a custom loop, that would be the best bet if you want to overclock that CPU. I'm only stating that for a stock setup, it's not required.

Now do you really need to overclock a 5820K?

You can't always believe that MHz is the end-all solution to performance. In most situations, it isn't. That 5820K has two more physical cores and 512K more cache per core vs the 4790K. It's going to be able to handle more incoming data than a faster processor with less cache. You can't always throw speed at applications. Having that additional cache per core will make a difference.