Basically, I installed a New GPU, GTX 660, everything is going well, until I turn on the computer and the monitor says "No signal Detected" everything is plugged in PCIE, Cables, I even tried DVI, nothing, computers starts with a beep, lights go on, little green signal on the Graphics card, but monitor will not turn on. Any Help? What Can I do to fix this issue? My specs are below:

Is it a possibility that the motherboard can't handle it?

Spewing because I got it as a present for chrissy :(

EDIT: Here's some pictures to give you an idea of the graphics card and case (also dont forget this is a pre-built computer, unfortunately not custom made. http://www.flickr.com/photos/[email protected]/

Do the fans turn on?  Does the computer turn off after a couple of seconds?

before you get to carried away assuming a faulty GPU it would help to actually troubleshoot a bit more.

1, Have you done a bios update?

2. did you have a graphics card in before or were you using onboard?

3. are you certain you have the card inserted all the way, looks like there isn't much room on that board and could easily need to be snugged up a bit.

4. have you tested your 12v rail on your power supply to make sure you getting good voltage? It's also quite possible that oem power supply might not have enough amps.

start there, don't just assume because your on-board works and the card isn't that it's faulty, that's a fools approach.

EDIT - after some more research I am seeing reports online of hit and miss with that board and a 660, some people are able to pull it off, others are not able to, one of the downsides of using a pre built unit with not many options. I would still do as mentioned above to see if you can get it working.

what do you mean to try the io on the mobo? all the fans on every single hardware turn on straight away after computer is turned on

3- i tried the best of my ability to push the whole graphics card all the way into the pcie slot, its definetly pushed in all the way.

4- ive tested that b4 i actually installed, all was fine, it should be able to handle the gtx660

same, ive seen posts of people not being able to use it, but i don't know why, ive tried everything i possibly could think of.

plug in your monitor's dvi/vga/hdmi/whatever connector into the GPU ports.  tell me if anything displays on the screen.

plug in your monitor's dvi/vga/hdmi/whatever connector into the motherboard ports, and then remove the graphics card.  tell me if that works.

Its quite possible that board cant handle it, sorry for the late reply here to had some stuff to do today.

There *should* be directions on how to update your particular system, most boards are all the same but some are different.

in all honesty I wouldn't get your hopes up to high, it could just be the power supply cant provide enough amps in that machine, do you have another laying around? if so try this...

put the card in your rig, but hook it up to a different power supply and then boot your rig up and see what happens, then you will at least know if the power supply is the reason or not, something you could fix then.

if you are able to test this, the second power supply will need to be running, easiest way to do this is jumper the GREEN wire to any BLACK wire, you can use a paperclip to do this and will not be electrocuted. Green to Black just remember that.

no, no power supply laying around, and its out of the question to buy one because I don't know what the issue is. I'm going to try and do what you said about the bios update, im gonna find acer aspire mobo updates on the internet and try and bios update the pc. I'll get back to you and see what happens. Thanks for the appreciative thoughts tho :)

bios is worth a shot, but in all honesty I have my money riding on that power supply not having sufficient juice.  ill be looking through the forums off and on tonight so ill keep an eye open for your status updates.

tech noob, sorry man, i didnt see your post. I tried that with the graphics card on and with the graphics card off the mobo, it started up completely normal without the graphics card (must have a onboard graphics card hehe), though for some reason my hdmi port on the mobo is plugged off with a black plug?? tried removing it no luck, i used dvi instead tho and it worked all together, so its out of the water to clear things up, it could either be the gpu or the power supply?   hope you see this so you can give me some feedback on what else i could try.

great news man, found drivertuner and i downloaded all these latest updates for my pc, at first the pc was 33% something health and now its 100% everythings installed (and actually the computer is running faster than before :) ) i turned off the pc, plugged in the gtx660, everything is running with fans, 1 beep from the computer, green light on gpu on, still no luck :( i even tried with dvi and the adapter that comes with gpu in the box, nothing, nilt, im so cut man, there goes my christmas i had been dreaming of haha oh mann

You dont have the 6pin pcie cable pluged in to the gpu in that picture.... 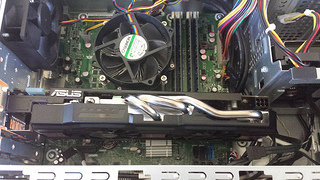 Have you pluged it in?

lol yes its plugged in everytime i tried, thats just a picture showing of my case, and that i've properly pushed it into the pcie slot

+1 for your admiration and simplicity tho :)

Have you tryed useing the molex to 6pin too? instead of the pcie cable? i am betting that oem psu dosent have the amps or voltage to power it.

A Molex to 6-pin? I have never heard of that before, how and why would that give the gpu any voltage? 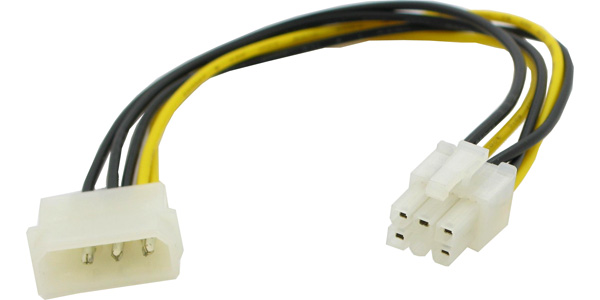 The video card didn't come with that lol maybe one of my closest computer shops sell them??

Is it a new card? all cards that need external power have these in the box.

unfortunately no its not a new card, i actually bought it off ebay for an alright price, seller had made his word that it was working and he had only used it for a couple of months and he needed the money for something else.Now i'm worrying that maybe the gpu is faulty. I might take it to this pc shop owned by this chinese guy, ask him to plug in my gpu into of his displayed computers and see if it works.