Computer fans spin when boot but does not power on

So A few weeks ago I had a failed motherboard, so I ordered another one after about a week of debugging and it has arrived today. The old motherboard is a Gigabyte Z87X-D3H and the new one is a Gigabyte B85M-D2V.

So I put it all back together and found that when I power the system on, the fans from the power supply and graphics card spin, but then stop after a moment. Nothing happens on screen or anything.

everything is connected right, cpu fan header is connected, and I tested the PSU with the paperclip method and it worked. I should also mention that the Power supply fan only spun as long as it does when connected to the rest of the system during Paper Clip test

Take out your graphics card, put just one stick of memory on your board, disconnect all hdd's and odd's and the only fan you want connected is your CPU fan.

Test and see if you can boot. (make sure you plug your monitor into your on-board graphics)

Alrighty so I just did that and it did the same thing. I did notice however that the fan did spin a tad bit longer this time.

Any ideas?
Thanks mate

Off the top of my head a few things to check:

Unfortunately I have no PSU to test it. Is CMOS the bios clear thing? That's what the manual said and it did nothing. And apparently the cpu is compatible with the board. If you need any details the specs aware:

did you remember to plug in the ATX 12V cord? I forgot to once and had the same problem.

Yeah every cable needed is in

Did you check the pins?

And apparently the cpu is compatible with the board.

Lets just double check as there is multiple revisions of the motherboard. Look on the board and confirm the revision. Hopefully they kept it in the same place with each revision: 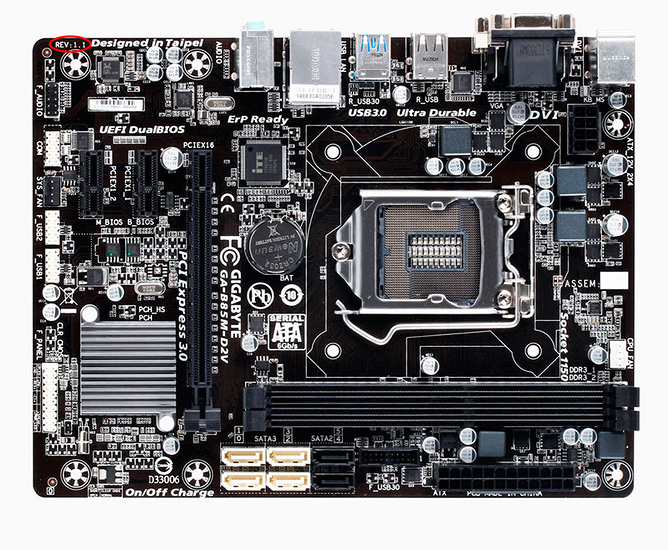 The revision on the Motherboard is 3.0

Ok so the first release bios version F1 is compatible, still worth the check.

Have you checked the pins?

No I have not checked the pins but I am not sure that it would be a problem, it is a fresh new board, the pins where fine before I put the CPU in, and I put that in gently. It does say 3.0 is compatible with the cpu. It seems to me that this is simply a faulty PSU.

I would say so to. Maybe you have a local pc store who would be willing to test it for you? Bring the system in and they will probably put a test PSU in to see. I know we would do that type of think when I used to work at one.

Let me know how you go mate.

Yea alright thanks so much for all your help, you have been so helpful.