If I plug directly into the N600 downstairs I get expected speeds when downloading from the internet (over 10MB/s). However, it seems the powerline adapters cut that in half, with a max speed of about 6MB/s.

Has anyone had any success with upgrading Powerline adapters to get better speeds? Should I try a wireless bridge instead? I want to avoid spending too much money on this.

I tried setting up the Archer C7 as a wireless bridge, but the custom firmware that I can run on it doesn't support the 5Ghz wi-fi, so I would lose wi-fi upstairs if I do that.

EDIT: This is now completed! https://forum.level1techs.com/t/completed-getting-100mbit-connection-upstairs/112940/42?u=deevus

I've never been able to get more than 50Mbps out of even a 2Gbps rated powerline, unless the units are literally 5 feet away from each other on the same circuit. You could try doing a wireless bridge, but that N600 isn't really a great unit. Although, the C7 is better. I would see if the C7's stock firmware supports wireless bridge mode. You'll really want that 5Ghz for Wireless bridging. I used a Ubiquiti AC Lite as my broadcast device and an Asus AC66U as the receive device, and struggled to get 100Mbps consistent. And that was using 5Ghz on wide open channels.

PowerLine adapters, so I've learned, are 'just works' technology for inside homes.

I've never been able to pull the full rated speeds in a LAN transfer test from any adapter I've ever installed, which all were 10/100.

OP, you will need to run a line of CAT6 upstairs if you want to utilize the full girth of your bandwidth.

2.4 GHz radio actually has a farther distance it can reach compared to a 5GHz radio, however, it does not operate at the same latency. A 5 GHz connection is much faster, however, you still should get a connection. If you're not doing gaming and or video streaming upstairs then you should be fine.

Agreeing with you. Anything else would be a compromise and/or would involve paying quite the premium and you'd still end up at best 99% compared to a cable.

Indeed. Orbi's or Google wifi are quite costly ($300+), and if thats the level of performance he is hoping to get then buying a spool of 1000ft of CAT6 will only cost you about $55.

A long Ethernet cable along the baseboard is the best way to get fast stable speeds. Save wireless for tablets and phones and power line adapters for consoles.

Best options would be to either use 5GHz wireless or running CAT6 cable, I can get enough bandwidth to saturate my 100/5 internet connection on 802.11/ac 5GHz WiFi but running the cable would be the best long term solution.

I love your answer as a real nerd like me would just run a line of CAT6 upstairs. Wireless is only used in emergency situations for me. LOL!

1+ for running an ethernet wire as your only reliable option. also, encrypt your power line traffic! 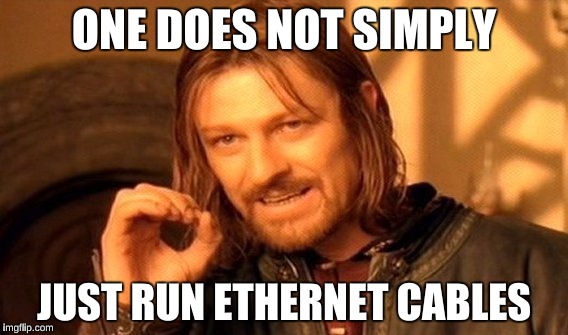 It's a pretty long way, and it is going to be particularly hairy in parts to run ethernet. That being said... if it's the only way...

You can get pretty long flat cat 6 cables on amazon if your going to try it.

The main problem is that I'm renting. The cable would need to go from the kitchen, through the dining room, the living room, up the stairs, across the hall then into my office.

I imagine it would be a bit of an eyesore

I would run it around the top edge of the wall, and pin it in place with white tape or something. Use white cables, and don't do anything permanent.

Ideal for gigabit connections. The FULL COPPER cable allows for speeds of up to 1000Mbps and its low profile design allows it to be run under floors or carpets easily as the cable is just over 1.4mm in height. | eBay!

Prices seem competitive enough. I'll have to work out what length I'll need exactly. 30m might not be long enough.

stay away from flat cables longer than 50 ft. Theres a reason that they are called "Twisted Pair". The twisting improves the shielding. I doubt these would give true gigabit thorough put, but if there was a review showing that they actually perform what they claimed to be rated for, is when I would pull the trigger and get it.

Flat ethernet cables are still UTP, there shouldn't be any difference between the two provided the build quality isn't awful

If OP is gonna get these, it would be great if he could run some tests.

@OP if running it inside is an eyesore is running it outside an option? You would need better cable but it would work.

If I go ahead with cabling, I'll be happy to run some tests.