Since I build several systems every year for clients, I have a bit of a unique advantage when it comes to experiencing and benchmarking hardware. I thought I would try to give back to the community by pushing out any requested benchmarks for the hardware I am currently working on before giving them to the client. This is likely to be the first a many benchmark posts about hardware that I am working with. I am currently striking up an agreement for a $1500 system which I should have next week, so stay tuned for that.

While I am waiting to put together the new build, I thought I'd do some benchmarks on a machine I have here atm. Thus I present to you a compact APU based system that we have lovingly called Muskrat. 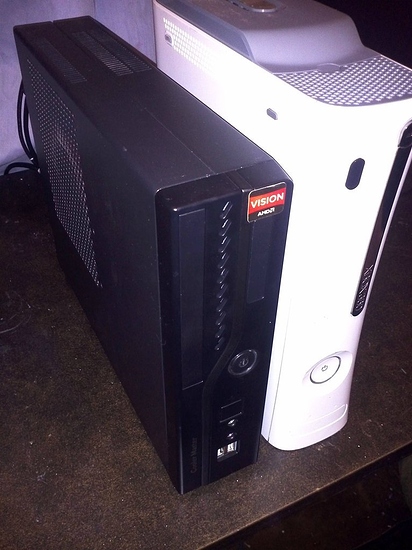 Muskrat is a compact system we use for testing the software we develope. More pics can be obtained here. The parts are as follows:

This chip managed a fairly decent overclock as well. The biggest inhibitor of OCing this system was actually the PSU, pushing the components too far would cause it to shut off, thus I held back some of the OCing to prevent the PSU from being over worked. That said, the OC is as follows:

So thats about that. In total this build cost me about $535 Canadian (including shipping and 13% tax), but make note this was built about a year and a half ago. Still going strong. Enough with the introductions, on to the benchmarks!

I opened a thread asking for benchmark requests a little while ago, Giga was the only one to respond though. I haven't gotten around to all the games he requested but I will in due time, I simply didn't have Dead Space or Portal 2 downloaded at the time. Below is a picture of the test results (sorry its a bit small, imgur and all):

Hopefully it is readable enough for all of you, I can post the xml document if you want at some point. But now for a bit of a walk through. (Right click the images and hit Open Image for a more readable view)

I then moved on to Battlefield 3, which as I expected was the most difficult for the APU to handle, barely scraping by with a playable 26 FPS on Low settings at 1920x1080, everything else at that resolution was too low to be playable. Resolution plays a huge role with BF3 on the A8-3850, so I stepped the resolution down to 1280x768 and got 46 FPS, 40 FPS and 31 FPS on Low, Medium and High settings respectively. For a bit of a mid-ground I went for 1600x900 and got 33 FPS, 25 FPS, 19 FPS on Low, Medium and High settings respectively. What this showed was that getting BF3 at 1080p would be a bit of a hassle, but dropping the resolution a bit (1600x900 or 1440x900) means you can comfortably play it on a mix of low and medium settings at around 30FPS.

Finally I got to Starcraft 2. I took a slightly different approach to SC2's benchmark, simply because I didn't want to replay games over and over again to try to get reasonably consistant results. So I opted to use a map call Standard Benchmark V0.5 for all the tests in SC2. This test was a fair bit more demanding than a normal game of SC2, having giant armies under cloak getting nuked etc etc. Also at one part it rapidly creates and destroys units, which would kill the FPS on most computers, so don't worry about the Min FPS on the SC2 since they are all gonna be low because of this. I think its safe to say you can expect you'd get a bit higher FPS than what will be posted here due to the nature of the test. On to the results. SC2 at 1920x1080 managed 94FPS, 40FPS, 24FPS, 14FPS and 13FPS on Low, Medium, High, Ultra and Extreme respectively. SC2 at 1280x768 manged 99FPS, 51FPS, 34FPS, 17FPS and 18FPS on Low, Medium, High, Ultra and Extreme respectively. Thus, SC2 is very playable at Medium or High at 1080p or lower, but don't touch ultra or extreme. Having worked with it for a bit, I'd suggest setting everything to High except the shaders, having them set to Medium will keep your FPS above 30 most of the time at 1080p.

So thats it for the first run through, I'll be adding Portal 2 and Deadscape when I have the time later this week. If you'd like more benchmarks from this system please feel free to request it and I'll provide if I can. Stay tuned, I should have some benchmarks for 2 more systems sometime this month (an OC'd FX-8120 + HD 6870 and an OC'd i5-2500k + HD 7970).

UPDATE: Just finished up collecting the benchmarks for Portal 2 and Deadspace, chart and results below: 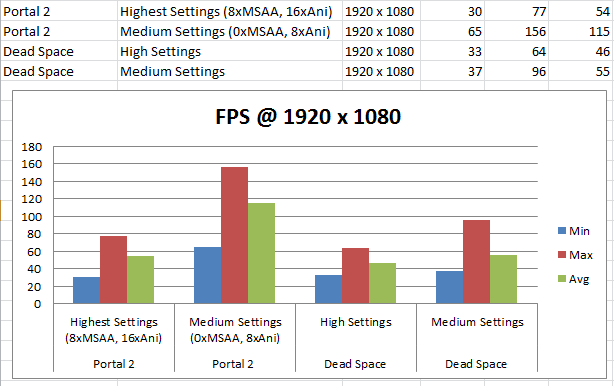 As you can see, the system was very capable of running these games at 1080p on their highest settings. These benchmarks were obtained using a user generated map in Portal 2 (120 seconds each) and using the first 10 minutes of Dead Space (5 minutes each, benchmarking took place after control was given to the player).

If you would like me to benchmark other games or applications on this system, please feel free to ask! You can head over to this thread to request benchmarks on 2 other systems I have (or will have soon) available for testing.

UPDATE 2: Just finished a SmallptGPU run on the Llano chip, only thing I can really base its performance was on its sample rate, which constantly flicked back and forth between 6751.6k to 6955.5k samples per seconds. So... Take that for what it is.

This is interesting so how much would this machine cost?

sure more the merrier, the more you know about hardware the better

"And knowing is half the battle GO JOE!"