So, I just finished talking to Comcast. According to their website (that hasn't been updated in about two years: https://customer.comcast.com/help-and-support/internet/data-usage-where-will-these-plans-be-launched/) the bandwidth caps are only for a few places. Well, the rep told me that as of an internal update on March 24th 2015 they are going to roll out the bandwidth caps to every customer but it should be fine because, "Sir, you can send 8 million emails!!!"

We have Comcast currently and the place we are moving (short term) has a few options but Comcast is the only thing over a few mb/s. So... I'm fucked: 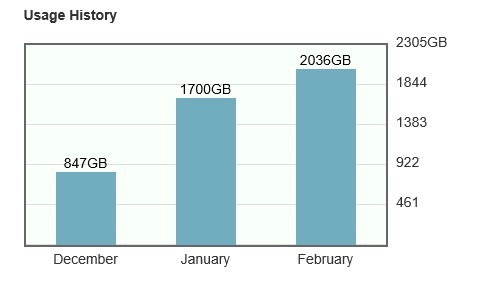 I am going to follow up with them more (to make sure the rep actually knew what he was talking about), but this is really, really bad for us (or anyone with Comcast). There is a local provider in Seattle that is expanding... but I'm on the waiting list. I might have to run my own lines. Anyone want to help me buy a few miles of cable?

I know you may be set on Seattle, and in all honesty, that may be the best thing, but, if you haven't put money down on a new place yet, consider looking somewhere else. Cox is a good ISP, and mediacom, while shit, does what you need them to if you pay for their business tier.

Well @Logan Bandwith is a finite resourse. Dont you know that they have huge mining arrays just to get you that 300gb cap. You should be grateful and bow to your glorious capitalist overloads

Well it's official america just turned in to australia

Doing the math... with their cap in place my total bill would have been around $550 for February.

I sincerely hope you can get more wiggle room @Logan…
Saw the rant on twitter thanks to anon lols… maybe instead of seattle you should go to portland … I mean it is a potential google fiber city? then again moving for only internet access may not be a good motive…

Who is the local provider in seattle? I am curious

Been dealing with bullshit bandwidth caps for the last few years.

Ya only thing in that area that seems to be worth a crap is condonet.

Around here Comcast has 150/20 business class for $249/mo or 100/20 $199/mo. They are uncapped but I'm not sure if that's changing too, or just the residential plans. Heck of a lot more attractive than a $550 bill if they keep business class uncapped.

Why is there so much greed in the world?

I had a 10/10 Mbit/s connection with no datacap for 10euros/month when I was studying.

I feel for you.

I just can't help but feel for you guys. It's just plain stupid over there. I have two 50/10 connections and I pay 10$ each with no caps whatsoever . ..

@Logan perhaps you should search a better place, man. I'm sure you can find one. Damn fuck american ISPs..!!!

Well we knew it was gonna happen sooner then later. Cable TV is dying at an alarming rate and you can't make profit with uncapped internet. Yep looks like everything is going to sh|t in a hand basket. The good old days of uncapped internet are coming to an end.
There has to be a reasonable deal for businesses. I can only imagine what the trauma center I work for in Tacoma uses on a daily basis. Thing is if Comcast is gonna roll out this crap my guess is everyone else will to. I mean why wouldn't they. They know your gonna pay in this day and age.

Well it's official america just turned in to australia

Maybe for you mate, but from where I sit with fibre to the home with speeds 100/40 and 1tb quota for $80/m I'm not complaining.

Not all of Australia is that bad, just most of it..

I had a 10/10 Mbit/s connection with no datacap for 10euros/month when I was studying.

I got someone signed up with TalkTalk's silly pricing. Paying £2.50/month (plus line rental) for unlimited DSL with a free router.

The reason I go into the pricing is to prove that data is so cheap that capping your usage is idiotic.

When I got Comcast Business Class installed at my house, the technician told me that he had been doing a lot more home installs since Comcast implemented in my area.

I don't know how much longer this will work to get around data caps if Comcast does this for the entire country.

Time Warner is still an option. I'm not hit with data caps yet

Depends where you live of course. Because we all know TWC and Comcast do not compete :)

@Logan: Hang in there. There must be a solution to this.