I have a samsung laptop with win 8 oem(came with laptop, no cd), upgraded to 8.1 then to 10.
I use my hotmail to login so I assumed my key-registration etc is tied to the account I have.
I had an ssd around so I open the pc and wrote down my product keys using "produkey", I took out the hdd of the laptop, made myself a usb win 10(from ms site), installed the empty ssd, boot up with usb, installed windows... but it doesnt activate.

I tried to search, found similar questions but not this case, I am sorry if it has already been asked before and I missed it. What can I do, I need to re install the orginal hdd, clone the hdd and then clone to ssd ? thats the only way ? or anyway I can do this ?

Ok, just incase I made a stupid mistake or I missed out something, more details.
the key I got, using my original windows hd, 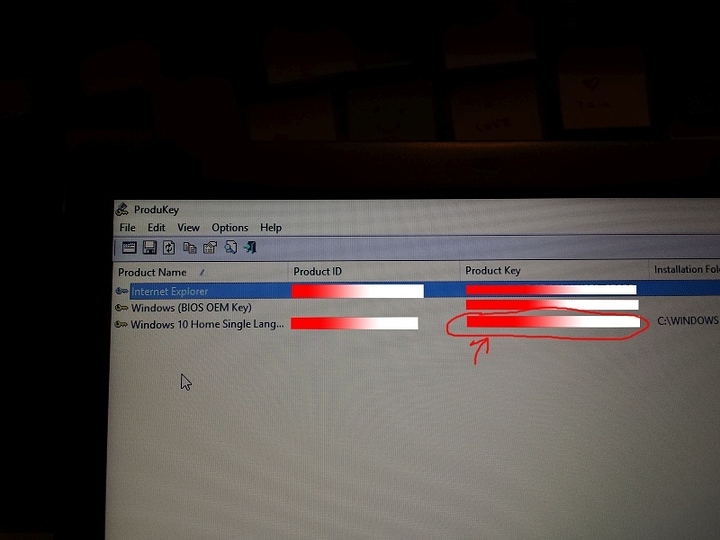 eror code I got before changing the product key(thought maybe it would work, because of my sign in hotmail account and bios etc... but didnt) 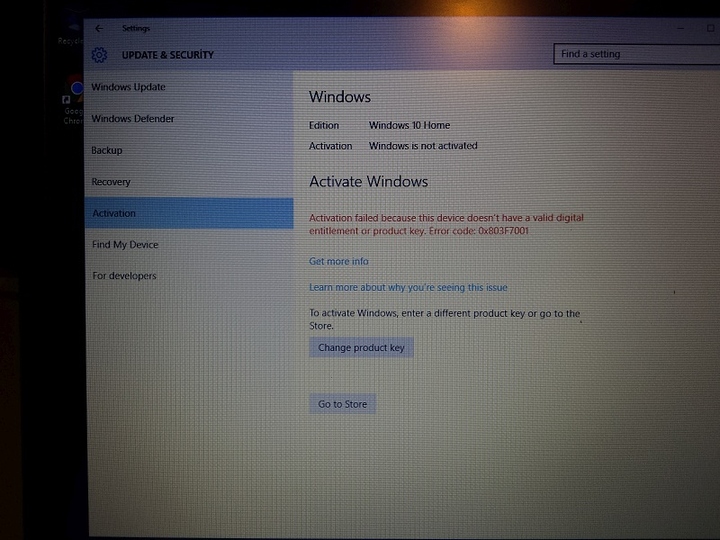 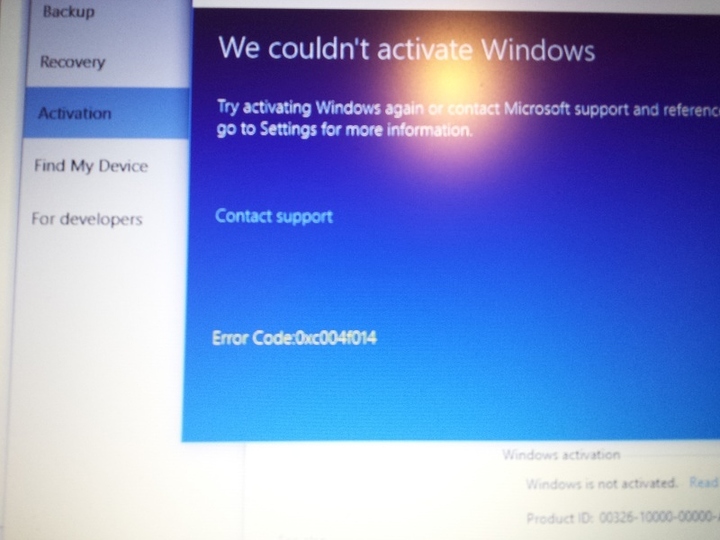 I would say install the ssd in your system and then install the win8 and and bring it up that way. Be sure to activate win 8 and then 8.1 and then the 10 update. Tell me you didn't wipe the old os without getting your product key for 8 ? When did you grab your key on 8.1 or 8 ? Because if you grabbed key at 8.1 then you will need an install 8.1 and then on to 10. A quick google will lead you to the iso you need.

Windows 10 will activate using any old windows 7/8/8.1 key according to microsoft here is the transcript from a recent convo with them

according to microsoft you just use the windows 7/8/8.1 key when it asks for a windows 10 key during install

That is what i thought but since the op has swapped drives around. Maybe they think the op is a pirate ?

nope if it's the november build 1511 there are issues with the activation (ive had a couple of people with systems that deactivated themselves despite being legit systems) that microsoft is aware of as per the transcript above if you had a working install of windows 10 it should reinstall replacing a HDD does not affect the activation of the system:

The only hardware changes that can negatively impact the activation status once you upgrade are changes to the:
CPU
TPM
Motherboard replacement

Ya? I still do it the old way for old software reasons and hardware compatiability. As long as i have it working in 8.1 i can upgrade to 10 and have it work but if i wait to installl in 10 then it won't work.

well if he has already done the reinstall then the best bet is to just use the old key and try at least.

The problem is I dont have a key, I mean the windows 8, that came with the laptop was oem. I tried to find the key using the produkey. I even signed into my hotmail account account, before swapping the hard drives, incase it maybe matched my account and the key so that when I sign in with my account on the new system, thinking maybe would have helped with the activation.... but no such luck there... I am 100% sure the windows on the machine is not a pirated copy.

I still have the old hdd(outside the laptop on the desk) with the windows activated on it. I acquired the key using produkey, from an activated win10 on the old hdd, but doesnt seem to work when I enter it using the new ssd. I didnt wipe it clean yet my worst case scenario is : I put back the old hdd, clone the old hdd to the new ssd but as you mentioned, replacing the hdd should have caused an issue with activation, which frustrates me.

You can still revert back to 8.1 on your hdd and pull the product key. I use belarc advisor cause i am old :) then grab an iso from microsoft of 8.1 and fresh install on the ssd. Recommend your fully update all drivers and add any software (update it also) you may use at that point. Then on to 10. Then grab the ten key again. Caution with clean installing because it is possible somethings may not work with 10 depending on your hardware or software that you use. Best to have a iso and key for 8.1 and iso and key for 10.

Thanks for the answer, thats possibly what I will have to do. I still have my win 10 system intact and activated on my old hdd anyway, I just took it out of the laptop and was hoping to format it after the new ssd worked, but thats not gonna happen.

It is very very frustrating, if this pc wasnt for my gf, I would have wiped all hdds and just tried my chance with linux. I know its an oem system, so I didnt pay the full premium price for the windows, still when I buy the laptop, they add some amount of money to it, because it comes with a windows and I can not even use the operating system that I did legally acquire, within the terms they dictate on me(they say I can not change my mother board, but its ok to change hdd).

Dont wipe that hdd till you have everything the way you need it. :) I only buy oem windows all that extra crap would have to be wiped anyway.

I know its kind of a stupid question, but lets say I do a system restore on my laptop, and roll back to win8(the os that it came with) then get my key using a program and use that on the win10 on ssd, would I have a chance to make it work ?

(but possibly just cloning the old hdd to the new ssd would take less time...)

Think you can just revert back the previous os from 10. It is possible that once you get the product key for the 8.1 just enter on the ssd and see if it works. I already set myself up with all the iso and keys before they changed the way they activated. So never done it that way. I do not recommend cloning as it is always best to fresh install.

If the only problem is activation, then you can crack the Windows. It would be illegal, so I recommend against it. But you can do it. Trying not to wink, or nudge, or nod, so that I may not imply anything.

Now why would you pirate something that is free?

The usb installer that he made of win10 is dependent on a preexisting windowsinstall / license. As far as i can tell?

aha once upon a time when I was a student and had no money did that thing that you might or might not be suggesting, and I had was less trouble dealing with that "free" copy than the legal copy I have now.... Well I am no longer 18 and I am light years away from being rich(can barely keep up with the bills) still I wouldnt wanna do that, when I can afford to pay for the os. I could possibly go buy a copy of win 10, and I do really need it(since my gf would be using this pc) but after seeing what they do... I would rather sell the whole damn stupid laptop, go buy a macbook. Its so f... up.
Its like buying a shoe and being told that I can wear it with any jacket I want but I can only wear it with the jeans and shirt I had on me, the day I bought it.... and then I do as they tell me to do, even if it is ridiculously stupid and violates my right as a customer and still some guys from the shoe company chase me puts me on the floor and take off my shoes saying I wasnt supposed to wear it with this jacket... wtf is wrong with this company... if shoe company made this to me I could possibly sue their ass so bad...
I can understand if my product is excluded from guarantee, due the fact that I made changes and that dont comply with their terms(I actually didnt...) but they just block me from using some product I prepaid when buying the damn laptop....