I am looking for an opinion from Logan, Wendel (I hope I have spelled that correctly) and the forum.  Would everyone take a small hit in top end and stick with discrete options if there was a hot swap ability to PCI-e? What I am saying is that you have hotswap bays for all of your PCI-e devices.  That means hard drives, sound cards, video cards, and the plethora of other devices that work in PCI-e would become easily replaceable without opening your case.  Since there is integration of almost everything in the PC I think there might be a benefit to making everything actively replaceable.  The main forseeable problems with this idea that I can see are: multiple versions because not all MOBOs have PCI-e 16x, the graphics cards that you could use would lag behind because of restricted form factors, and all devices would require a new pin layout to use the new slots to make the device in question easily ejectable.  If not then there would be significant conversion problems at first from the moment that you get the PCI-e hotswap bay attached from starting conversion price of the individual units (if the project isn't put on kickstarter) to the manufacturers picking up the new designs.  Think of it like an active express slot on a desktop for full fledged PCI-e products.  What is your opinion on this idea?  I have further thoughts that I am currently working on in other platforms, but it seems that something of this nature would fit perfectly into the desktop world of PCs. 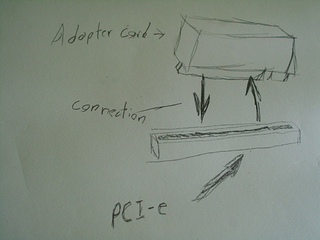 I think this would be very useful for particular industrial and commercial use. I don't think mainstream would use this though. Most people don't have multiple components to switch out on the fly.

This would be really useful for servers or other machines that need to run 24/7 365 days a year. If a part fails, then you could just switch it out.

But you cant really do this... for example say you need to swap out a raid card... you cant do that with all the drives spun up and people accessing the data from it... that is why most big business have redundant servers so they take out offline without killing the business

Yeah, I realize that, but what if a drive fails and you could just replace the one drive in the raid without having to shut down the server. Ultimately you would need atleast 2 servers incase the motherboard crashes or something like that, but this would be great for single drive replacements, video cards, sound cards, and any other periferals.

Granted there would need to be some saphistocated program that could populate the new hardrive back into the raid configuration while the system is still doing its normal functions.

But if this did work, it would be a game changer.

Well the speeds and functionally of Thurderbolt allows these... PCIe to Thurderbult adapter allowing a 10Gbps Bandwidth

That would be really cool then. The future is looking pretty good. lol

That's not what I meant, but yeah if you did have storage drives in RAID you can't just remove them without causing harm.  A good way to think about this is a desktop version of express card slots that you had on laptops.

Thunderbolt could be an expansion to the slot itself, but it wouldn't be limited to that.  I am talking also having ejectable discrete graphics for quick replacements.

Yeah, maybe I took it out of scope, but on that, how often do you need to change out graphics cards? It usually just takes a quick restart and 5 minutes. I think only testers and reviewers would find that usefull really.

Well, it doesn't have to be hot swappable or graphics based, but it's more or less to make it quicker and user friendly.  Nothing intimidates a customer like saying you are going to have to whip out screwdrivers and worry about static/invasive troubleshooting.  You could be doing a quick upgrade where the results are immidiately recognized.  I guess the biggest thing I am poking at is that it's not nearly as invasive or as time consuming as pulling everything apart.  You could upgrade your USB from 3.0 to Intel's thunderbolt without so much as a full shutdown.

This already can be done. It's also a software problem, not a hardware problem. The kernel must be able to handle the shutdown and the start of a device, that's all.

Optimus, for example, uses hotplugging and you theoretically could remove the extern graphics card.

Linux also can do cpu hotplugging since 3.8 and it doesn't require changes in the hardware because it's a software problem.

Interesting... But Microsoft has always been behind the 8 ball when it come to these things, for example microsoft didn't adopt USB support until long after Linux had it. But I think with the Intro of Thunderbolt to the PC Market will be a bit of a game changer, as Thurderbolt from what i understand is a "PCIe" usb port essentailly.

Well I hope so. But I also realize people still don't even use USB 3.0 very much either lol... Thunderbold will be amazing for external graphics for laptops though... you could have desktop graphics performance on a very small laptop.. and then just unplug the graphics and take the laptop when you needed to be mobil.

I am aware of the software problems, but it would be a short amount of time tell it's supported in the OS if something like this gains popularity.

No joke on Microsoft's support problems, but if you're using Linux you would have the support.  The slot would just be a final step in the procedure.

The only reason i went to USB 3 on my desktop is i share my External HDD's and it allows for good bandwidth... but the reason Thunderbolt is not as widely supported in the Windows seen is again the problem of Software... any Windows Thurderbolt System needs third part software to run, which isnt that simple when you start talking about the complexity of thunderbolt.

Which this can be supported with an ejectable swap bay.  The only changes would be a software ejection that can probably be canabalized from other laptops.  Then you can also work on the optimiztion and functionality of the thunderbolt adapter.

Swapping out PCI-express would be a massive change for not much result, the benefit of being able to throw in a second graphics card on the fly is minimal to the overhaul in design of cases, motherboards, cable managment so much so that it couldn't possibly be worth it in the end.

Also as somebody else mentioned, RAID cards would become near impossible to use and i'm sure there are dozens of other reasons.

Other than that, you don't need anything else. You don't NEED a plug and play video card, while it would be cool, it would be useless. We need better and smaller video cards. If you're gonna pay for 2 video cards you might as well have money for a decent enough case to fit them inside. This convenience thing is what keeps the industry from growing (tablets, screw tablets)