I have a very VERY picky computer in my inventory. This computer is very selective on which operating system it wants to run. I've been on a quest to find ANY operating system that will actually run/install on it. The machine will defy explanation as it gives all sort of various errors while trying to run or install different operating systems , despite the machine being very basic and unremarkable.

Challenge: Can you find an OS this picky old machine will actually run. I'll try them all and update the list as I go.

Lubuntu and Linux Lite are good and lightweight.

Lubuntu is a no go , requires PAE support.

I kinda doubt you'll find a Distro for a machine that old. the kernel itself probably uses more memory than what that machine has.

the lowest specs I've seen for most lightweight distros is like 1GiB of RAM at the most and like 5 GiBs of storage. which is realistically something from the Win 2000 to XP days.

It's not linux, but have you looked into Net BSD.

Well that's why it's a challenge!

Xp requires only 96 mb to install officially. However modded versions will install with 32-64. When running the machine uses about 70mb of ram.

Well that's why it's a challenge!

It's not a challenge if the PC itself doesn't meet the requirements of Linux. the lowest Processor is a 500mhz core processor.

I'm shit at Linux, but I worked with a guy who would always tell me about his various adventures installing CrunchBang (#!) on PII and K6 machines with 256MB of RAM. Maybe give that a try?

the machine has 24mbs of RAM lol 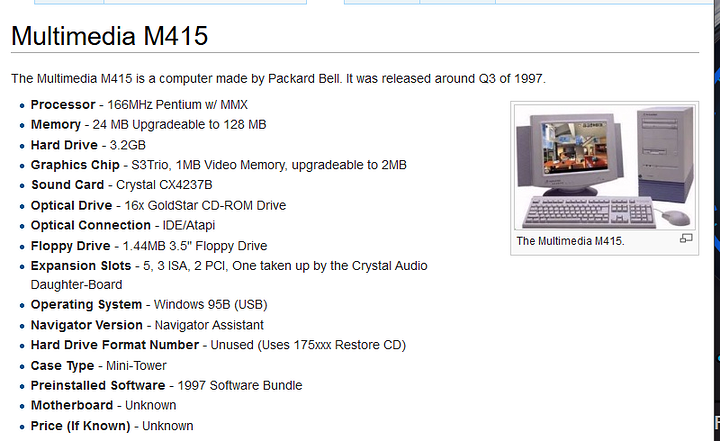 The Palm had 32MB, so hey it might just work.

Only needs 16mb of ram

Yes DSL was succesful when run off a cd.

While it's not Linux, I have had success running OpenBSD on very minimal hardware.

the machine has 24mbs of RAM lol

the lowest Processor is a 500mhz core processor.

The cpu requirements of vector linux's current distro are anything that has PAE support which includes a 233mhz pentium 2. The pentium 1 is the same speed however no PAE so that's where this will be a toughy.

seeing lots of bsd recommendations I'll have to try it and see how it goes.

Keep in mind, most of these BSD distros are very minimal out of the box. The beauty of this is you can install a minimal (and snappy) GUI on top of it and have something that is usable. If you have a network adapter, you might be able to build something that is even web capable!

does bsd not come with a gui as is?

It has the super basic and old school X Window GUI. Most people promptly upgrade, i3 window manager is a popular choice.

I wonder how hard it is getting a gui version of bsd installed. guessing it won't be too simple, I'll still try it