from time to time i set up, repair, and tune cb radios and their antennas.
and I monitor channel 9 ( FCC designated emergency channel) and I’m not the only one who monitors it! (various emergency services and police)
anyhow I was replacing some crystals in an antique radio ( many old radios are treasures to many radio buffs)
and some clod comes on channel 9 just spouting a bunch of bulls#!t and playing a weird sound effect.

usually someone warns them quite quick but last night no one responded.
after hearing the crap for 5 minutes I broke in and told them channel 9 is for emergency only and to knock off the idiot sounds.
all quiet for a couple minutes and then got thank you from 4 different monitors

sometimes you get dolts who just yammer on endlessly and it gets old after while.

sometimes you get dolts who just yammer on endlessly and it gets old after while.

HAM and CB radio bands are full. I really wish I could get licensed in even more different frequencies

we should inform others so they want to learn more. but yes there are 40 other channels on the cb…

once they figure out Ham is cooler, they will switch

HAM and CB radio bands are full. I really wish I could get licensed in even more different frequencies

when you add the expense and requirements together its a wonder anyone gets involved with ham radio!
being retired and on fixed income tends to put a kibosh on a lot of things.

not everyone knows about proper mic etiquette

we should inform others so they want to learn more.

ha I still remember my first cb We had to replace the transmit and receive crystals for 8 of the channels (and they had to be soldered in (UGH!))

later models came with sockets or ( solder) YAY no burnt fingers! (this was long before I had any formal training in electronics).

not everyone knows about proper mic etiquette

I like to just listen with my cheapo sdr.

many people will install a cb and try to use them without having the antenna matched(Tuned) and end up burning the radio out.

Its really easy to get caught

when you add the expense and requirements together its a wonder anyone gets involved with ham radio!
being retired and on fixed income tends to put a kibosh on a lot of things.

The expenses arent that bad but yes they are sort of prohibitive. Radio is one of those technologies that the establishment doesnt seem to want people to know how to use

I like to just listen with my cheapo sdr.

Depends one which bands you listen to though. Not all bands can be picked up by an SDR… Talking about sub MHz bands… But thats mainly Euro Long band anyways

bt dubs I really wanna get this… and play with it… sorry for OfT https://greatscottgadgets.com/hackrf/one/

@Gnuuser ever done any AMSAT work by chance?

well that depends on the radio now doesnt it

set up a couple antennas and ran the cabling for a good friend in a wheelchair (he did the rest)
40 foot telescoping tower and rotor!
(I had a spare tower so he got that for nothing)!

some times its great to get a heads up on weather and road conditions from the drivers and they often appreciate the friendly conversation!

I forget how tall your allowed to go? I remember it was like what 200-300 feet

anything above 100 feet required a beacon (if I remember correctly, but that was a long while ago!)
and if 300 feet or more required special permits.

haven’t been on for a while Ive been recovering from a bad case of pneumonia!
anyhow i’m reviving this with a little extra information i came across in my old manuals
mounting one atop a roof would not be practical due to wind resistance and damage that would occur if the antenna were to be blown over.
most people will not put up a tower unless they have a considerably large plot of land in which to set it up.
while the tower base does not cover a large area the guy wires will!
minimum angle for support would be 45 degrees and by that figure a 200 foot tower would need a 40,000 square foot plot((200 by 200)) ( 4 sided guy wire support) and the optimum angle of 67 degrees would require an area approaching 90,000 square feet.((300 by 300))
just something to consider the guy wire anchors in this case i would use 5 gallon buckets filled with concrete and buried with at least 2 feet of topsoil over them.
any size tower that you put up needs proper support and for every foot in height you want equal distance from the base at minimum for the placement of guy wires and 1.5 times for optimum angle.

i have been driving down the road before and had someone bleeding over up to 10 channels while keying their radio… they were talking on 19 and i could hear them from 14 to 24 roughly. there is no telling maybe the person was gapping12 and had bleed over onto other channels…

When I was running NYC a legal cb was useless, the guy next to me could not hear what I was saying’ 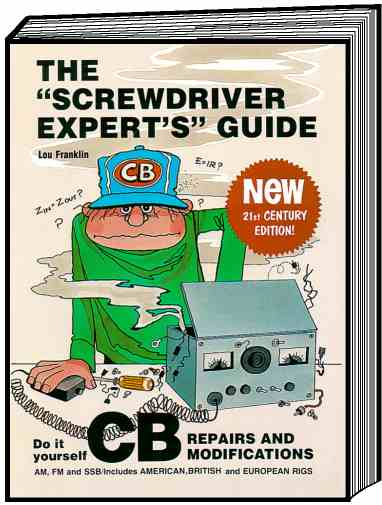 turn a screwdriver, get more power. Like overclocking but without any consequences