I’m in the middle of an argument with a cabling guy about some Cat6A I had ordered. They brought in some Honeywell Cat6+. They’re persistently saying it’s exactly the same thing.

I have never heard of it and it reeks of BS to me. Anyone have experience with this?

Here are some links:

Hello, I have worked on several nice home theater builds over the last year. Cat6A UTP 10GB solid copper was installed for the in wall backbone of the...

Hopefully this will shut him up…

Seems like a good buy if you want to have gigabit speeds with more PoE++ stuff on the cheap. Otherwise, CAT6a is king.

Plus doesn’t exist, cable guy isn’t a cable guy but a marketing person.

EDIT: Read the PDF.
Bob likes flashy things, he likes to buy the best of the most awesomest thing for the cheapest price even tho he ordered something different.
Bob’s an idiot, don’t be like Bob.

What’s worse is that this “Cat 6 Plus” is supposedly not rated as highly as the 6A that OP ordered.

@oO.o Don’t take shit from this guy. Call his supervisor.

Don’t take shit from this guy. Call his supervisor.

I wish. He is his own supervisor unfortunately. Situation is that he and I were hired by a company as contractors. His job is cabling, mine is IT. We’re doing a 10GbE upgrade.

I’m in the clear now, but the guy was a dick. Said I didn’t know what I was talking about.

After I found that PDF, I was able to prove I was right. Caught me off guard though. Had to scramble to figure out what those cables were about.

Caught me off guard though.

Well considering they’re non-standard I would be too.

On a related note, does anyone have a preferred bulk Cat6A UTP brand? I’ve used the Monoprice one in the past but it is ridiculously thick (23AWG). I’ve seen some “ultra-thin” Cat6A listed at 28AWG, but I’m hesitant to pull the trigger on it having never used it before… For Cat5/6 I like Sewell, but they don’t make 6A.

Looks like I am going to make the runs myself (there’s only 9 lines) because of how much of a dick this guy is. I think he just doesn’t have a Cat6A crimper and is trying to sell off a surplus of this Cat6+ stuff.

The fuck? All crimpers work. Unless hes doing STP, which you don’t get unless using CAT7.

On a related note, does anyone have a preferred bulk Cat6A UTP brand?

Recently used this on an install and it was amazing. 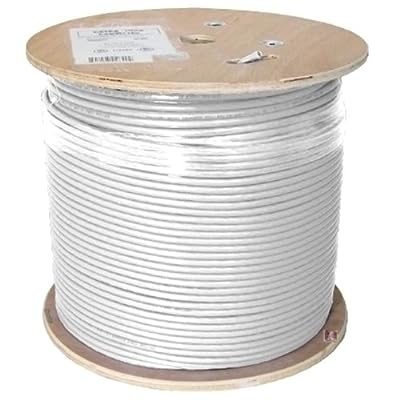 This Cat 6A unshielded twisted pair cable is a high performance data communication cable suitable for 10Gbit high speed applications. It has excellent attenuation and crosstalk characteristics and exc ...

Recently used this on an install and it was amazing.

How thick/flexible is it? The Monoprice stuff was like f-connector coax. A real pain to run.

Also, do you know of any boots that fit it? One end is going straight into a switch (no patch panel).

This stuff is riser rated, its quite malleable. The ‘stiffness’ is usually due to the plastic spine in the cable and not the AWG rating. To give you reference, this cable is not as stiff as RG6.

It is also true solid copper, not CCS. This adds to the stiffness, but they are just above stranded cables in that regard.

You should not directly connect the backbone to devices, it is not proper.

One should connect a keystone to the back bone and then use a small (1m or so) stranded cable to the networking equipment.

You should not directly connect the backbone to devices, it is not proper.

One should connect a keystone to the back bone and then use a small (1m or so) stranded cable to the networking equipment.

It’s an unusual situation. There’s a space issue in the rack and all of it is just going into an adjacent room. Can always add a panel later if it makes sense. Maybe just put it on the wall.

Yeah, the reason why is because the runs should be to a static area, since after cutting to length you won’t be able to make it longer unless you add the keystones. So on things like networking equipment you want the runs to go to a patch panel and then use smaller cables to arrange the connections how you need. I understand there may not be much room, but do you have at least 2U’s to spare for a 48p patch panel?

I understand there may not be much room, but do you have at least 2U’s to spare for a 48p patch panel?

If I do it, it’ll be something like this mounted to the wall by the rack. 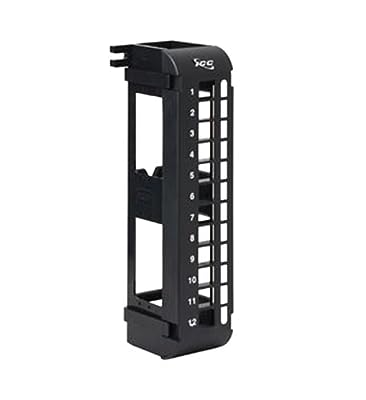 The server rack is on wheels (half rack), so it doesn’t make much sense to put the patch panel in it. There’s a network rack on the wall, but it’s full.