So I’m doing a refresh of a current build. Current hardware is as follows

Now I know that power supply needs to be upgraded. I found out about vfio after this was built and the 3090 was supposed to be a 3070 but the shortage happened and I got lucky being able to pick up the 3090 at retail a year ago. I have 9 corsair LL120 fans in the case now but a few of them are showing their age and honestly I’d rather skip RGB this time around. My question is what case would you guys and gals recommend? I was thinking either the lian li o11 dynamic xl or fractal meshify 2. I like the ability to mount fans at the bottom to get as much air to the GPU’s as possible as I am also aware the top card is a tad choked off. However this system has been rock solid for a year now. The only issue I have with the o11 is that dumb ROG logo on the side panel. Anyway I was interested in the communities input since it’s kind of difficult to find builds with multiple giant gpus in them lol. Thanks in advance.

Maybe look at the Fractal Torrent, with a top-mounted PSU you get maximum air flow to the secondary GPU. Though you really can’t go wrong with any of the cases you’ve short listed.

Thanks for your response! The fractal torrent was on my short list as well. I was a little hesitant on it because of possible issues with the space for the power supply if I step up to a 1200w or 1600w. Just in case the new ryzen 7000 series is too tempting lol. Also I didn’t know how the 360 AIO would work with the two 180mm fans, and it would seem like a waste to take those out. Any thoughts? 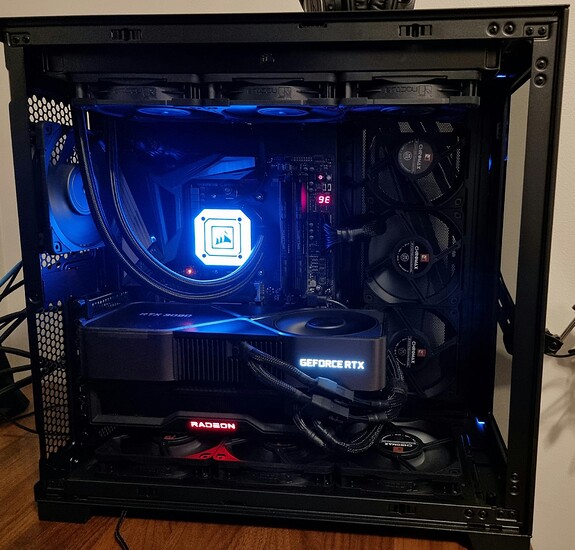 Thanks for all your input. I got my 3080ti back, and upgraded my PC with the new components and the new case. It’s running fine and much quieter than before. The temperatures reported are 15C lower on the “hotspot” of the 3080ti - 75C now vs 90C in the old case under load. I use my PCs at stock speeds and don’t over- or underclock. My standard wo…

If you need to use USB PCIe cards you might have to invest in one or two right angled PCIe adaptors.

@Dratatoo I really like that case the only reason I didn’t go with it off the bat was because I wanted to reuse the AIO I had.