Before you ask, YES this is also posted on LTT.

First post here on the TS forum. Damn, the signup process kicked my ass. I couldn't get that Capcha right for the life of me.

I'm looking at doing a case mod. A very severe one.

BUT FIRST, SOME BACKGROUND!

I've been swooning over the design of Apple products since I was about 5. I got an iPod Nano when they first (-sih) came out. I'm now 17 and starting my last year in high school (as well as starting dual enrollment). While I love the look of Macbook Pro's and the modern iMacs, they really don't impress me. (Okay...maybe the Macbook makes me a little envious, but I'd rather have a Blade 14 2015 or something, although not being able to write software for iOS on my current laptop is annoying. No I can't hackintosh it)

There is ONE Apple device that I'm truly envious over. And I finally own one. 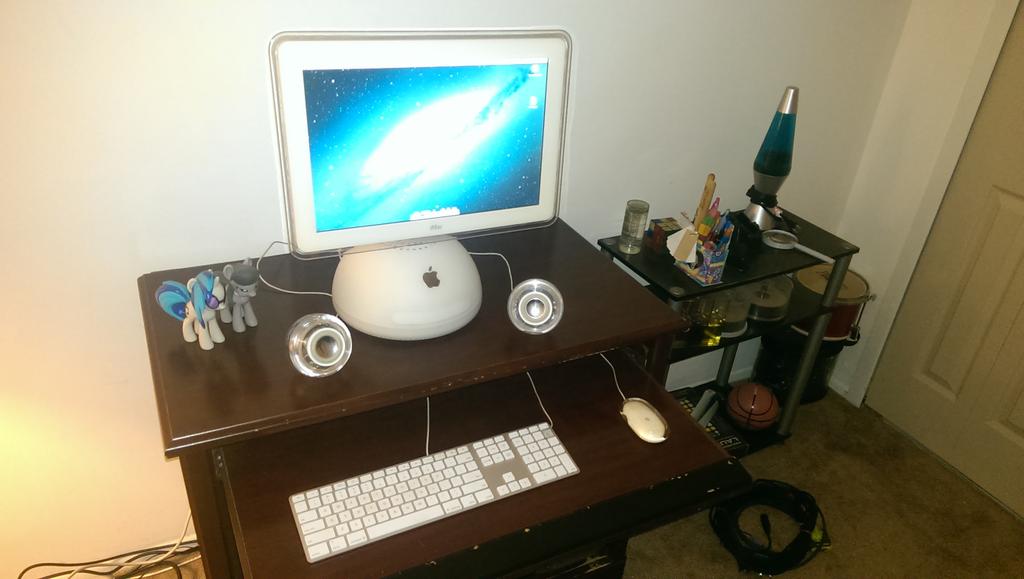 There's a problem with it, though: It can't play GTA V. Yes, I'm aware it's a Mac, but that's not really the issue, now is it.

I want to gut it. I want to take every single little thing out of this shell and make it modern and open. I want to take a Mini-ITX board, SFX PSU and a small GPU with a riser card, and I want to attempt to make this a workstation.

Cooling will probably be an issue. The design currently relies on negative pressure, as far as I can tell. It has a fan pushing out at the top and passively pulls in air at the bottom. High pressure fans WILL and water cooling WILL MAYBE be necessary. Also, replacing the display with a laptop display would be a nice touch. Although running wires through the neck is the biggest pain in the rear.

My thoughts on hardware: It depends.
I'm looking at the most modern hardware and how long it would take to save up for it all. My low end thoughts have something to do with an i5-5690k and a z97 itx board paired with an itx form 960/970. If I'm going balls to the wall, i'm looking at something like the 5960X and a R9 Nano or Fury X (Although I really like CUDA)
Definitely going with 2.5" SSDs though for storage. There won't be enough room for 3.5" drives and cooling, and I want the drive position to be flexible. Even if it means I have to pay $350 for 1 single terabyte.

I would really love your thoughts on hardware and cooling.

Now, for the part that I don't really want to write, but want the feedback on. If this project was being crowd funded, would it be something you would contribute to? Not only would it be for the PC, but you would be funding the time for making a video series on the thing. I've already got the audio gear for the thing, and I could probably dig up better cameras than my cellphone. Even my work can't fix cell phone footage. (I might even make a stretch goal for renting/buying a decent camera as well)

I don't want to make a crowd funding campaign if I would get an outstanding amount of backlash. I want to make it if you all want to see something like this sooner.

TL;DR I want to cut open an iMac, and this isn't the first time.

How would you get the display to work on the new motherboard though? I'd imagine it's connected by something proprietary.

Otherwise the only other thing I could tell you is get an external PSU, I forget the company that makes a lot of them, but they have up to 150W I think mini-box/pico

Should also toootally write your software for android over iOS, but, whatever, apparently iOS owners are more likely to buy software.

Just going to throw this out there that those computers are pretty rare. Not sure how many exactly were made, but a working model is somewhat hard to find.

There is a way to mod the existing display to use DVI. It's not very hard. But I'd rather replace it with a laptop display and run the wires between the driver and the display through the neck.

I can get at least 5 more in my area fairly easily. The 17 and 15" models are common. The 20" is slightly less common and much more expensive. I see more still working than don't.

Also, the one I made into a lamp was just an empty shell and arm. It was already used for spare parts and I got it for free.

So, what's the point this mod anyways? Just to do it? Because if you want like a nice all in one PC you should just look into a Crate Computer Case, or one of the various mountable ITX cases.

Didn't @wendell make an AIO PC with a monitor arm in it with a Lian Li Q30A?
That thing looked like a killer for offices. Should make a nice prototype and then sell it to fancy offices with too much money.

There were a couple of reasons I wanted to do this.

One, yes an AIO would be nice. LAN parties are easier to get to with an AIO (Less to carry)
Two, I want a challenge.
Three, I want this machine to live on.

It can currently play my FLACs, and that's about it. I can maybe run a one person Skype call on a hacked version of Skype, but if I'm in a call, I can't touch the machine or it underruns the call. I can do a bit of LIGHT web browsing on it, but that's about it.

Now, I was not aware of this, it's REALLY not the aesthetic I'm going for. I want it to look as close to factory as possible. Mainly for wow factor.

At some point in the eventual future, I want to do a cardboard fab of everything that would be going in, loosely, just to see if everything I'd like would fit.