I bought it a few days ago. Man do I regret my purchase. It was just 4 euros, so what the hell thought I. It would be fun, thought I. It’s a strategy game, I like those, thought I…
It is so RNG it’s not even funny. Absolutely no skill required. If you get the better cards - whatever you do - you are screwed. I played 4 games already and it’s not getting any less RNG.
It drives me mad how little what I do matters.

DO NOT BUY THIS GAME. IT’S GARBAGE…

More levelheaded thing to say is that they could fix it with just one small change - allow you to choose from a handful of tiles, instead of giving you just one tile and you have no choice but to play that one tile, but they won’t change the game… Maybe the tabletop game is better, people seems to like it, but a lot of reviews say the tabletop is better and this is just a bad game…

It just drives me so mad to have no input on whatever happens on the screen… Maybe I am thicc (I know I am), but I can still play other card games… maybe cause they aren’t really card games. On the other hand I think I just don’t like card games… I know this ain’t really a card game, but still… This game drives me mad. I haven’t refunded a game since … a long time ago.

I hope you can still return it and get the money back!

44 minutes in, 4 rounds played total… Hell, the scripted tutorial I won basically by RNG because it gave me 2 good cards and I pumped the numbers.
I sent a request for refund. I thought “do I see myself ever playing that game again?” and the answer was obvious.

My purchase have been refunded… 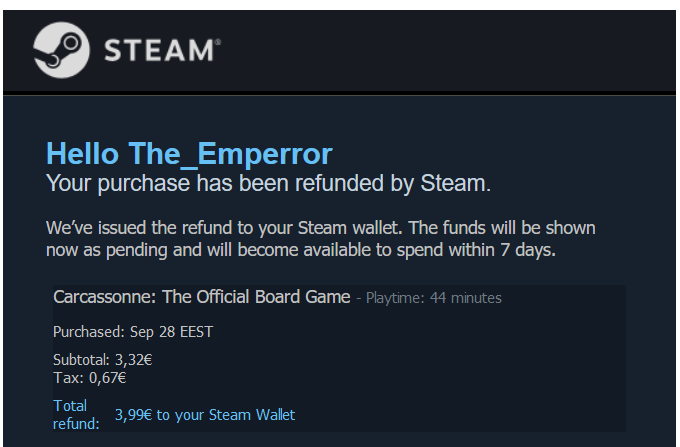 allow you to choose from a handful of tiles, instead of giving you just one tile and you have no choice but to play that one tile

DO NOT BUY THIS GAME. IT’S GARBAGE…

Does the tabletop give you any choice what tile to play?

You play the one you pick from the pile.

Then you stick the thing to your town or path, if starting out new you put a figurine in and that is that.

So it’s the same…
Am I the only person disliking RNG?

Am I the only person disliking RNG?

RNG is why I can not get into any card game, PC or tabletop.

Carcassonne has a nice tactic element to it. Build a town next to one of your opponent, put the 2-point guy in it and take over the town harvesting all the points

Unless your opponent started the town and already claimed it, got a monastery tile and claim a couple roads as well…

How to get in on a claimed town: 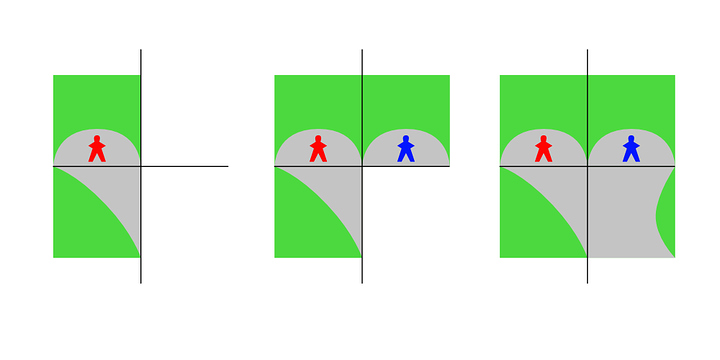 I refunded it today…

Kinda reminds me of “the Oregon trail” board game

The physical game is a favourite in my family at christmas.

Some are happy little farmers, biding our time, some are mighty guards, seeking cities to claim. Some peacefully tend their abbeys, while one is a theif, robbing any and all highways he comes across…

The game is a lot more fair than monopoly, and at the end, the victory can change hands, rather than some being killed off / broke out earlier than others.

The video game, I havent played