Like I mentioned in another post, I just recently bought a 40" 4K monitor, which I can return until Tuesday.

I only play League of Legends, watch Youtube, Netflix and Twitch on my Computer.

League of Legends is nice in 4K, but not really "impressive"
Youtube sadly has no 4K support as I heard?!
Twitch is not in 4K yet either, if I am not mistaken
Netflix... has some shows in 4K. I just watched the first episode of House of Cards (saved them until I would get a 4K monitor) and took a screenshot from the intro.

Is this the sick 4K everyone is talking about...? Cause tbh, when I watch a 4K monitor at an TV store, ofc, it looks great, they make it look great. And if I lay in my bed, 10ft from the monitor, I also think that the picture is great, but is 4K really worth it? I mean 4K compared to 2K is really expensive. I can almost get a 2K OLED for the price of a 4K LED.... and so on.

Cause when I look at this screenshot from close, it's not impressive at all, while it still is, when 10ft away, so I doubt it has something to do with Windows's picture capture software.

My plan details are: 4 Screens + ULTRA HD (it's the free month, but I doubt that matters, otherwise they wouldn't call it "Ultra HD").

Firstly I would like to point out that youtube does indeed support 4K and I will add a 4K video below.

4K is indeed worth it. The issue here is PPI or pixels per inch.

An average computer monitor is going to have a ppi of about 90-110 depending on the exact size of the monitor (which is usually below 35 inches).

A 2K monitor will have roughly the same ppi, but on a bigger screen.

If you were looking for a super sharp image, then you should have gotten a 28 inch 4K monitor. But what you do have is a very large screen that does not look pixelated.

Okay, I checked this video, some of the clips do look amazing, I have to admit that, even on my big screen. And now I know what u mean. I kinda feel like there is two different sorts of 4K, because a few of those clips weren't "sharp at all", looked more like Netflix, where others looked like 8-12K.

I didn't buy the 4K monitor because it was 4K, I bought it because I needed a bigger screen for watching Netflix/Youtube/Twitch and 4K came in handy as an upgrade. Now I think if I might should just go and buy a 55-65" TV in 2K, since 4K isn't sharp anyway on those large monitors..? Or are there monitors, in 40", where all those clips and Netflix look like pure nature? If so, please let me know until Tuesday, cause this is kinda meh... I feel like I don't really see a difference on Netflix watching with this monitor in 2K or 4K... do you guys know what I mean? I mean, so many write here that they have 40" 4K and love them... what do you do with them, that you love them? :D Everyone playing sick FPS/MMORPGS and enjoying 4K that way or why you like it? Cause like Netflix etc. isn't "the shit" tbh :(

And I am fine gaming on my 23" [email protected] monitor, sure I would take the upgrade on 40", but it's really big and intense... And when I checked Netflix I was underwhelmed. I thought 4K is soooooo sick.

Means you dot have to scale windows UI

Honestly I dont care what Wendell or anyone says about 4k at 40 inches, it fucking pointless. you get 4k for the sharpness end of. so stretching a 4k image on a massive monitor is stupid. get 2, 2k monitors for a perfect mix of PPI and display real estate. if you get a 40- inch 4k monitor end expect sharp results looking at it from 12 inches away on your desk then you will be dissapointed.

It all comes down to viewing distances and PPI

Where is the sense?

well I have 2, 27inch 1440P monitors and they look perfect. All I am saying is 4k is pointless at 30+ inches and if your gonna complain about not looking sharp then thats the reason. get 27inch 4k and put up with low res UI in windows or dont get 4k at all

Well, my main reason is watching Youtube/Twitch/Netflix in my bed. I have a 23" currently. I can't see anything on that (too small). That's why I went for 40", that's for me a large monitor/tv. But like I said, I can't really see the 4K sickness from that distance.

that's for me a large monitor/tv

Agreed, so how far is your bed ?

is your netflix account set to maximum quality or auto?

What I'm not liking about 4K from a consumer standpoint is how informed said consumer must be, as this thread talks about, what does the actual pixel per square inch boil down to- there is a lot of marketing fluff out there and 4K, UHD etc is getting thrown around for screens that are not much better than 1080. Then to add issues to this is does the TV set support 4K content even if the content is 4K? I've read of some early adopters having 4K smart TVs (seiki if I remember) that have chips that will not support how Youtube compress said 4K, so sorry, no 4K for you even though Youtube has that video available as 4K, and your screen is 4K, buuuut...

I think 4K+ has a ways to go still before the dust settles and we reliably get that UHD demo video experience at the store more consistently with our content- be it the ISP's fault, firmware/chip hardware, standardization/regulation of nomenclature, content creator's equipment etc.

I just checked my local big electronic store's website again, where I bought the monitor, and here are the cheapest prices for each region and desirable fabric:

I found these numbers interesting to compare, you can propably get everything around 100-200€ cheaper on Amazon/another store, but those should work for comparison and are all decent producers.

correction: they do support it on some external media devices like the Shield and Roku 4. You could get one of these, and connect it to your monitor via HDMI if you want Netflix in 4K.

Here is their info page on it:

Can I stream Netflix in Ultra HD?

This article contains information about watching Netflix in Ultra HD on compatible devices.

I really like 2k, easier to run and it still looks great. you cant see pixels

40" 4k is more about productivity rather than things like quality in games and the like, as you can fit way more on the screen than you may ever need

Okay, THAT definetly makes sense. Because I was just watching House of Cards and please check this screenshot: 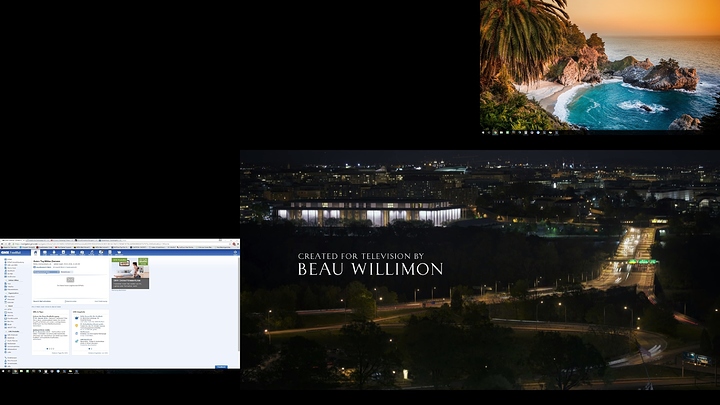 I don't know on which monitorsize you will open the screenshot, but on a 4K monitor (only the middle screen), the letters aren't even shart. Considering that, I couldn't tell the difference between 3840x2160 or 1920x1080 8.8 feet away from the monitor. Regarding the Youtubevideo, it was just the same, in both videos, from 8.8ft away, the pictures were great!

So I am thinking, that I really don't need a 4K monitor, which, to be honest, is quite expensive right now, but much rather need a big tv (55-65") and hang it on the wall and keep playing on my 23" [email protected] monitor.

So, above I listed a lot of TV's, all of big companies like Sony, LG, Panasonic, Samsung... I actually did a lot of research on 4K monitors, cause I thought I'd be blown away, now, since I am not, I am wondering what to look out for on TV's.

Is LED tv = LED tv or are there TN/VA/IPS panels... etc.? What are the criteria I should buy a tv? Is 3D even a thing? I saw blurays 15-25€/piece. That's quite a lot for one movie. Are there 3D movies online to stream? Has anybody tried it yet? Is it a nice experience? What about OLED? An OLED is at least 1000€ more expensive than a LED, is that worth it? Again, I am watching Youtube, Twitch and Netflix. On Youtube and Twitch I mostly watch Livestreams of e-Sports like Dota 2, League of Legends or Counter Strike Global Offensive.

Ahh, and if I buy a 4K tv, how do I know if it's for Netflix? And I would like to connect the TV to my pc via HDMI 1.4, HDMI 1.4 still does [email protected], which is perfect for movies, right? And can I use the Netflix "app" to get 4K when connecting it to my computer? Cause I doubt the wireless/wifi connection will be strong enough for 4K content, so I would prefer proving the TV with internet from my computer.

Also what you think about 65"? Too large? I am sitting about 10ft away from the screen.

from the Video production/delivery end of things with how YouTube and Netflix currently compress 4k you will not see a massive jump in image quality for video while their 4k video has more pixels as you would expect they can not linearly increase the bit rate to get the same level of quality.

secondly you need to factor in not just ppi but also viewing distance. the more pixels you cram into an area the more they will belend into each other as you get farther away. here is a link that has the basic chart for screen sizes and viewing distances. For Your Video Education

I also did get this link once in this forum: http://www.displaylag.com/display-database/

It's about input lag, but should I just buy a rating "Great" or "Excellent" one of them, or is the list factoring latency, delay.. etc. too much and I only need the category "image quality"?

If you don't do a lot of productivity work, then it's probably not worth it, maybe just get an adaptive sync display and call it a day

as far as the TV goes, just get whatever is decently priced really, the bigger it is generally the farther you want it back.

With TV screens which is going to be what you have to buy input lag is not really measured, its not a marketable stat for TV buyers generally so the manufacturers come up with bs about refresh rates and contrast.

So I don't care about the tv specs? I just check for Netflix support and a cheap offer?