Even though this forum does´t seem to be that active in building rc models (there´s no category for it). I want to make this a little build log of a project I have pushed back way too long now:

With the sector for offshore wind energy emerging in my region there is a pretty high demand of so called CTVs (Crew Transfer Vessels) that are used to transport the engineers, fuel for generators and lighter cargo to the windfarms. Those ships are typically purpose built 20m catamarans that use normal FPPs (Fixed Pitch Propellers) or jets and achieve a maximum velocity of about 30kts.

Living near an island (Helgoland) in Germany where most of these ships are operating from I have had many opportunities to take pictures and even arrange a little walkaround on one of the ships.

All pictures and reference drawings are published in this public folder of my website:

(If you want access to the 3D-Model, send me a message)

How it will be made

After spending way too much time on writing down this .... eh ... shit, I would greatly appreciate any kind of ideas, tips, help or anything else that you can contribute to make this little project of mine a success 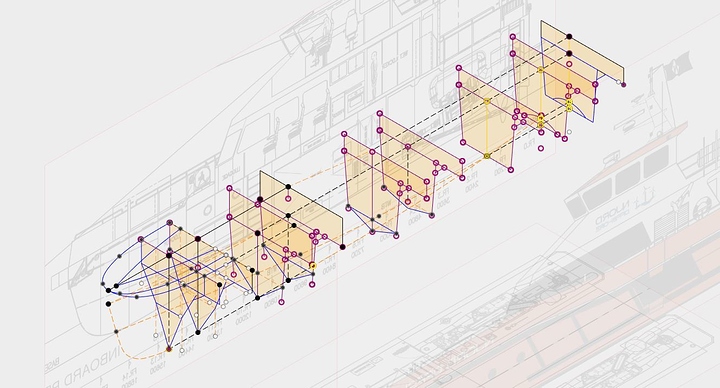 Well, that sort of looks like what I´m going for, definetly need to fix some wobble though (and model the front and back side) 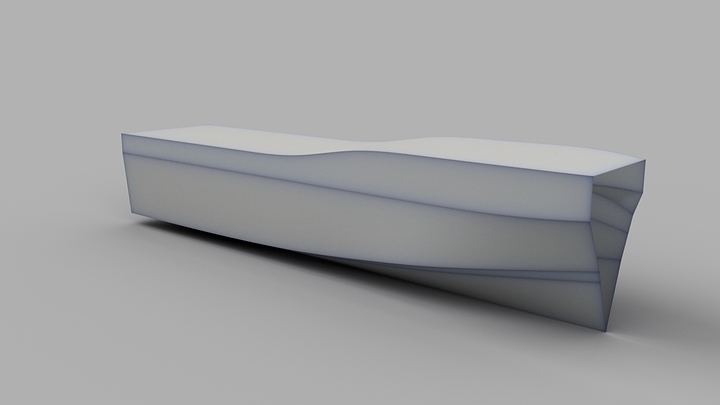 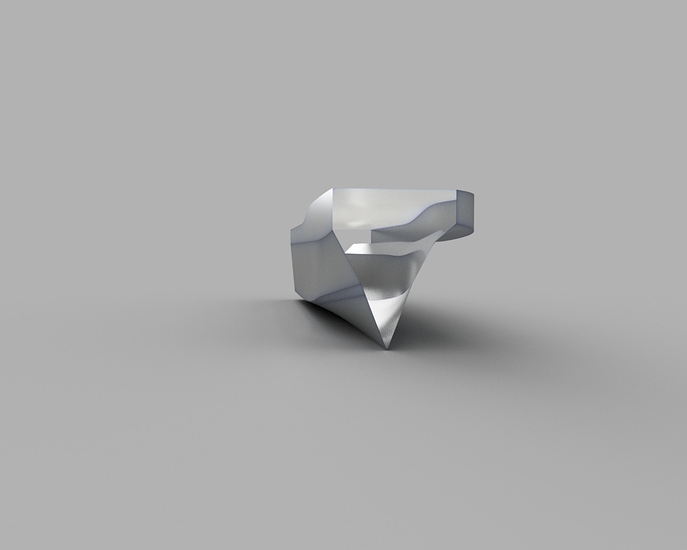 CAD file looks way more crowded right now, due to some more work being finished (and polished) at the front.

More tests with the loft tool (the tool in Fusion 360, that I am using to extrude and combine the individual sketches) suggest that the front might be a tough candidate, but nothing unsolvable (yet). 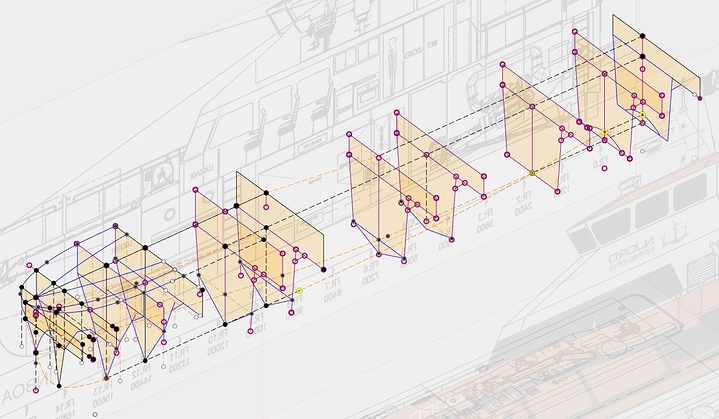 I am also thinking of changing the model scale to make the weight issue less of a problem. Because the weight grows with the cube of the scale even a length of 62,5 cm (50cm) would allow for a weight increase to 850g (437,5g).

This would completely saturate my print volume for my Ultimaker 2, but may be worth it.

For now I´ll stick with the scale of 1:40 and decide about the final scale by the time I´ve got a floating prototype.

I am actually euphoric about this turning out somewhat ok...

Well, I did use the loft tool, but in a different way .... I guess my statement above is still somewhat valid?
Nevermind, it did add a lot of issues but nothing that some reverting to previous saves couldn´t fix

For now the Object is completely solid and the shell function in Fusion 360 doesn´t want anything to do with such complex bodys.

(I am actually thinking about exporting the body as an STL file and hollowing out the shape in meshmixer... Reimporting Into Fusion would would fuck with pretty much everything, though) 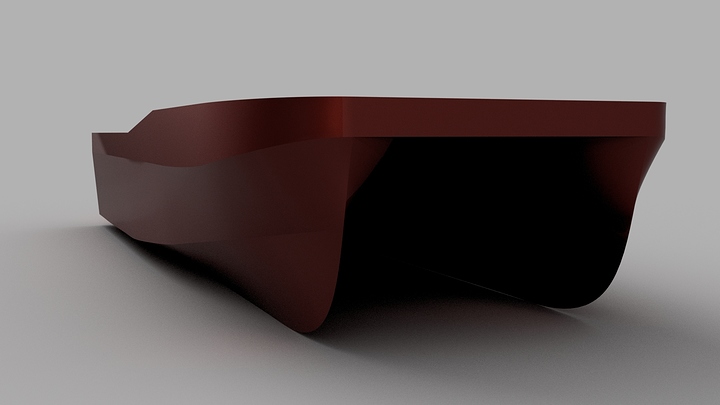 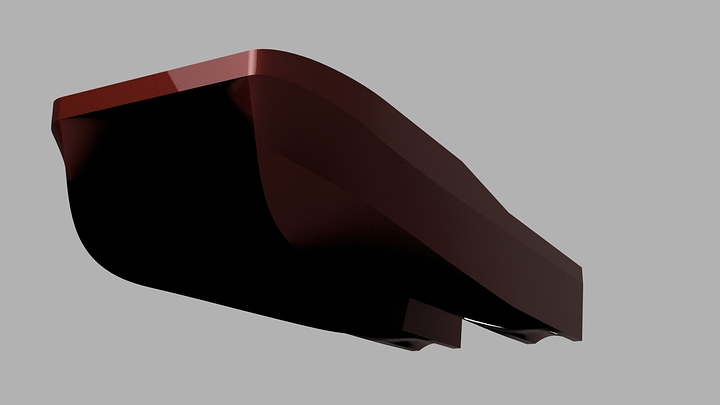 I managed to print a small prototype of one side of the model as well which looks very promising.

I´ll try to print a complete model of the hull tomorrow to evaluate my approximation about the maximum weight. (20 cm length) 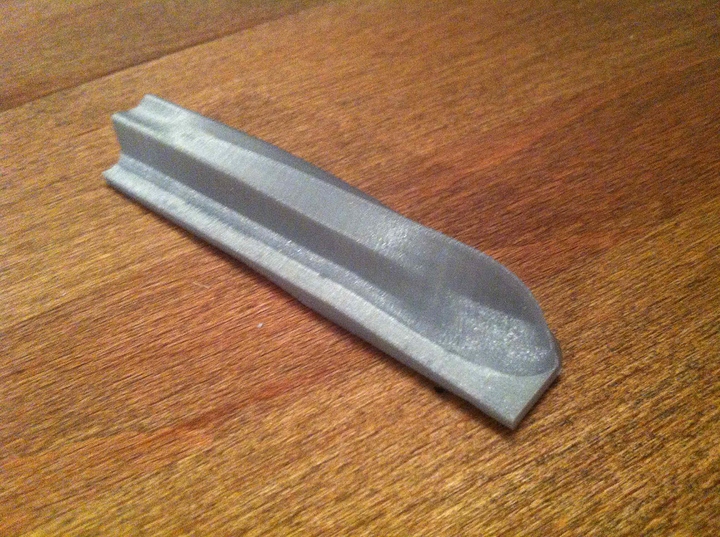 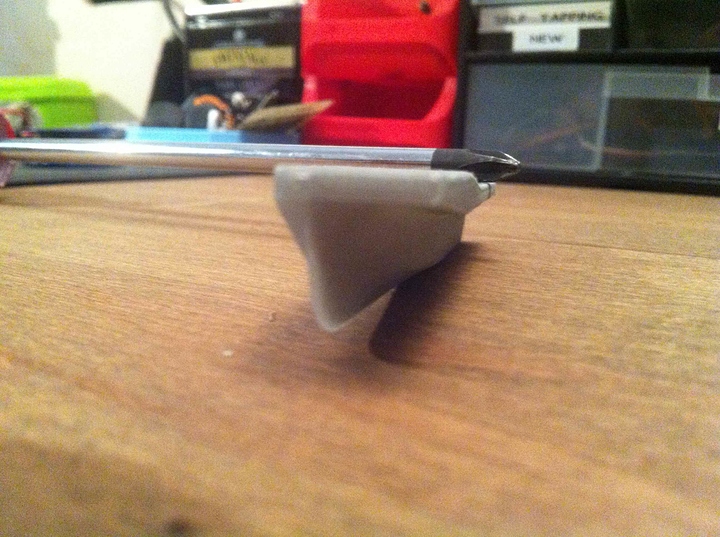 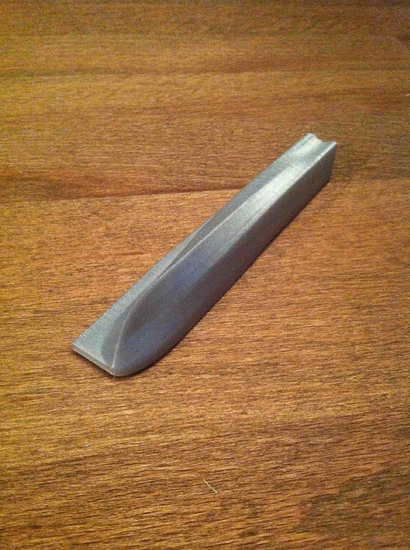 I am currently printing the promised prototype with a scale of 1:100 to make examine which scale to pick for the final model. 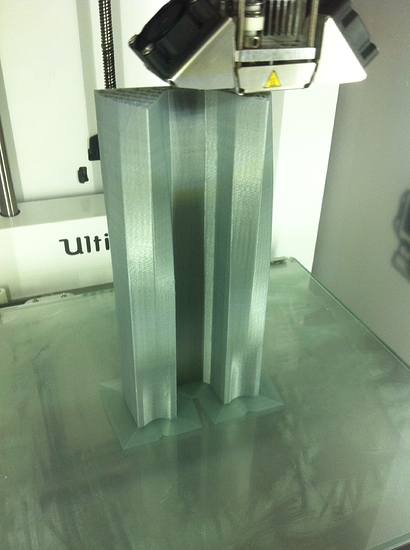 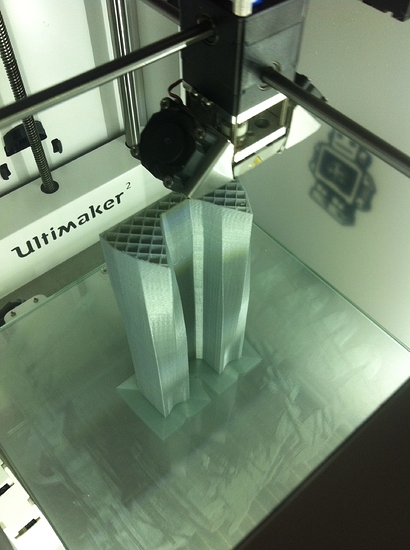 The volume of the part of the hull below water level seems to suggest a maximum weight of 768g (Scale 1:40 -> 50cm) which would translate to an original mass of close to 50 tons. That would conclude that the 1:100 model should weigh about 50g to float with the correct looks. Tests will show whether this is correct ... (extimated mass of the printed model is 75g) 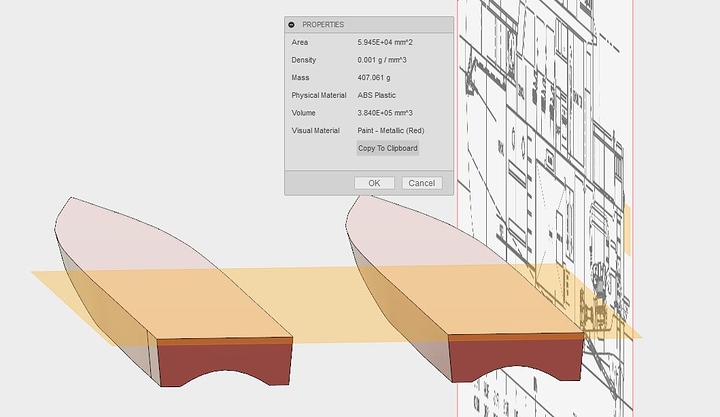 This won´t have that much of an impact to this project, but it means that I probably won´t be able to do proper CAD work for half a week or so.

At least no important files are lost, as I am relying on owncloud for file storage and fusion 360 has got it´s own cloud service

The 3D-printed model turned out great and honestly looks very promising. After spraypainting it, to ensure that water doesn´t leak through small cracks or gaps left by the 3d printing process, I did some tests in a sink, which, again, looked promising and confirmed my calculations based of the CAD model. I am also setting myself a weight limit of 700g 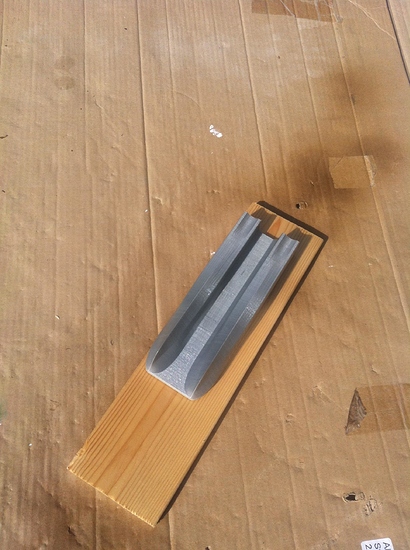 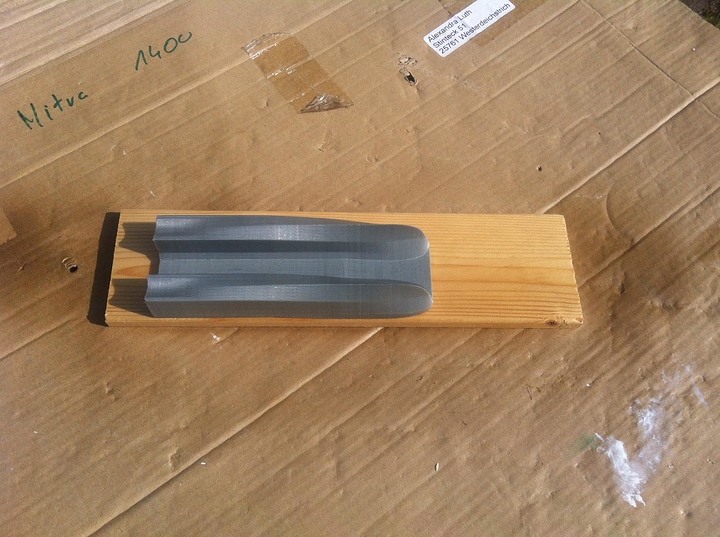 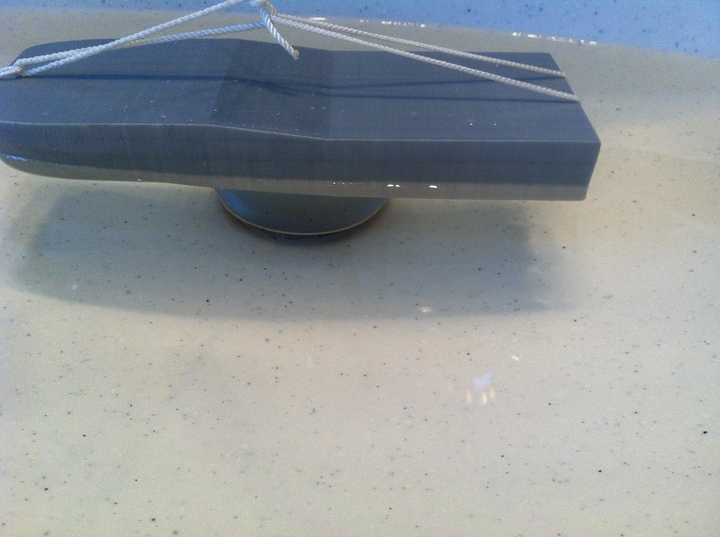 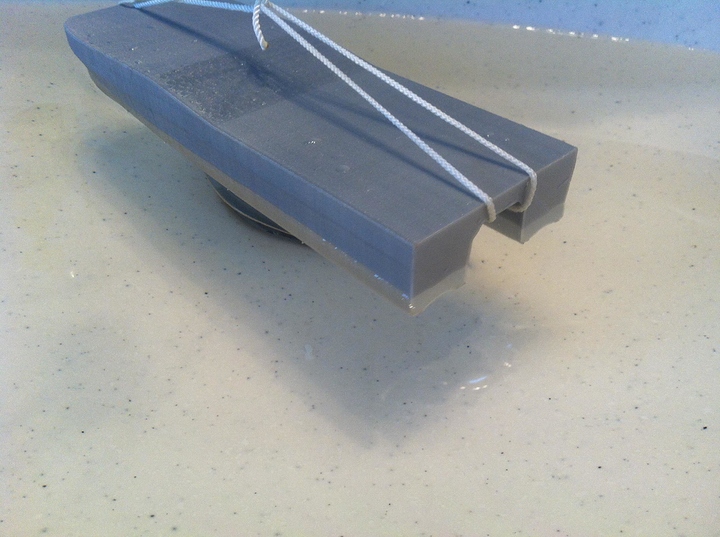 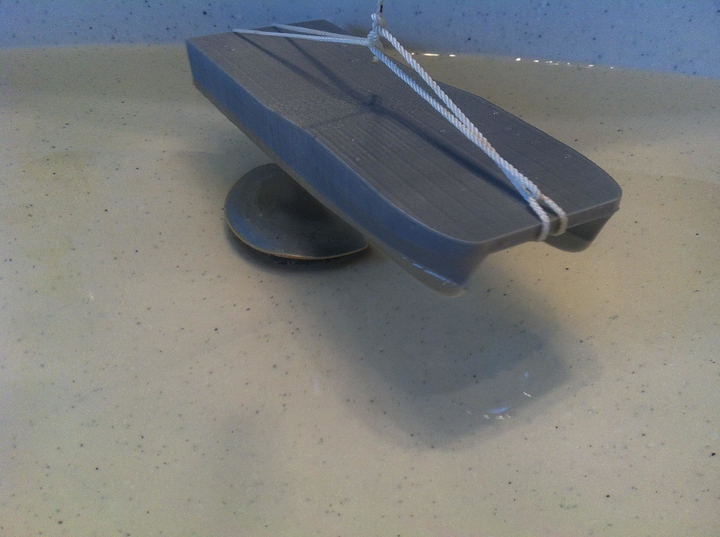 Ok, as you may be able to see by the fact that this thread hasn´t recieved any updates for 3 days, it had a substancial impact on my project. I am currently using my secondary computer, that I just bought from a friend and will resume CAD work until my main rig is back up and running (probably around Tuesday).

In terms of CAD work, I ran into some troubles as well as my body of the hull won´t hollow out when using the function provided by fusion. This is due to small gaps between the faces generated by joining the individual splines seen in pictures above. I am currently in the process of trying various ways to get fusion 360 (or any other program) to hollow out the shape and give me something a can work with.

Main pc is up and running again!

I´ll try to work a bit more on it by now, but I cant promise anything.

On a side note: I exported the back of the hull as an STL file and importet it in cura... 40h of estimated print time...

This is a really cool project. I'm a mechanical engineer looking to get into yacht design.
How did you get you're hands on the boat designs? did you have to buy them or contact the builder directly?

I asked the company offering the chartering services to the windfarm owners, NJORD Offshore. They were very kind and gave me access to the drawings I uploaded to my cloud. They also arranged a little tour on the vessel I am building for me, which was, again very nice and cooperative.

(I sent them an email to this thread sooo... hello guys?)

If you want to do something similar, I´d suggest taking a look at delft ship or similar as this is a program specifically designed to model the hull of a ship.

Another update after a way too long pause...

I am currently printing the front third of the model as a solid part (5% infill), as I gave up on getting the shelling tool to work.

I am expecting this to fail spectacularly, but I´m still going to try....

20h into the print everything looks fine.... yet

I can´t believe it

pretty cool! in for updates

had an idea for getting the hull as light as possible, and still having the rib supports like real life. in what ever software you are using make blocks to subtract area in between the ribs. then have it print with the top of the ship on the bottom of the print bed. ( this is a rough guesstimate on the physics but it should work.)

I actually had a similar idea a year ago, when I was examining building a bigger printer to print the hull in 1 print. But the back of the hull would result in a very lange overhang which would decrease surface finish and overall strengh.

EDIT: I do plan on adding ribs, probably made out of polystyrene.

I am currently printing the middle part in two sections with 1.6mm wall thickness. I´ll report with pictures once the main hull is completely finished.

Ok, I have to admit, the last post included a bit of cheating (and tape)

The Back side was printed way too thin a nearly immediately cracked...

But on the positive side of things, I refined the back third adding proper holes for the shaft for the propellers and rudders and added a servo mount.

I also ordered some (mystery) parts

And did some more modeling

After printing the proper rear parts of the hull, I used way too much epoxy to finally "glue" everything together.

The only worrying thing so far is the weight of the hull that already surpassed 700g (aka half of maximum).

I also printed and assembled the small stand visible in the bottom picture.