I don’t expect to play a lot of games on this, but if I like how it turns out I want to try it again with a Lattepanda Alpha which is much more expensive but it can play GTA 5 at 720p 30fps. Not Ideal, but the fact it can do that tells me it should be able to play older AAA games nicely.
I’m just testing the waters with this. 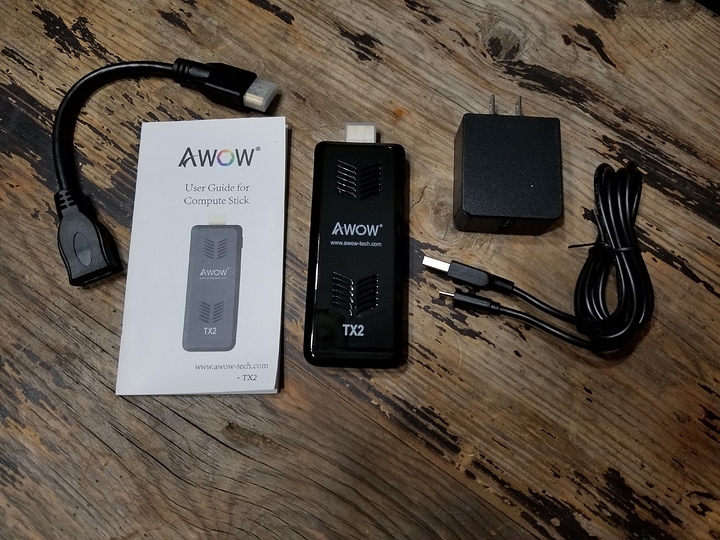 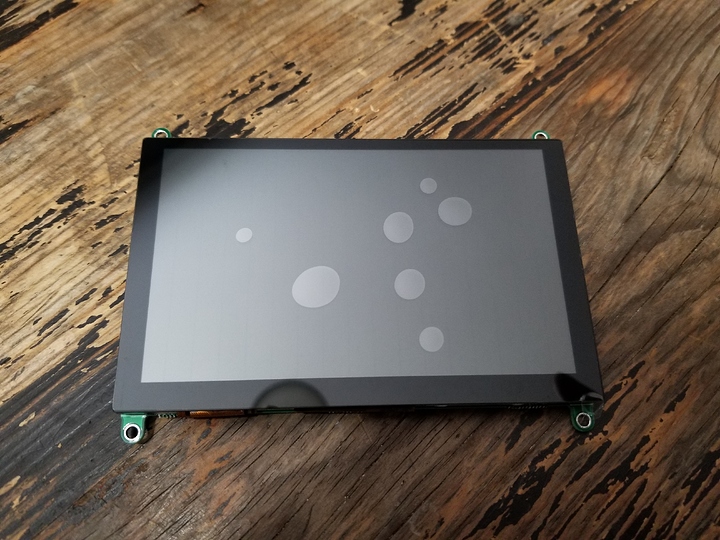 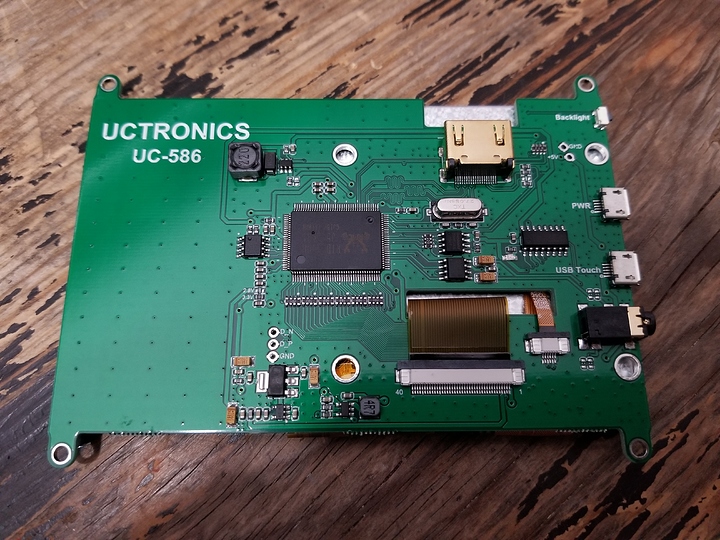 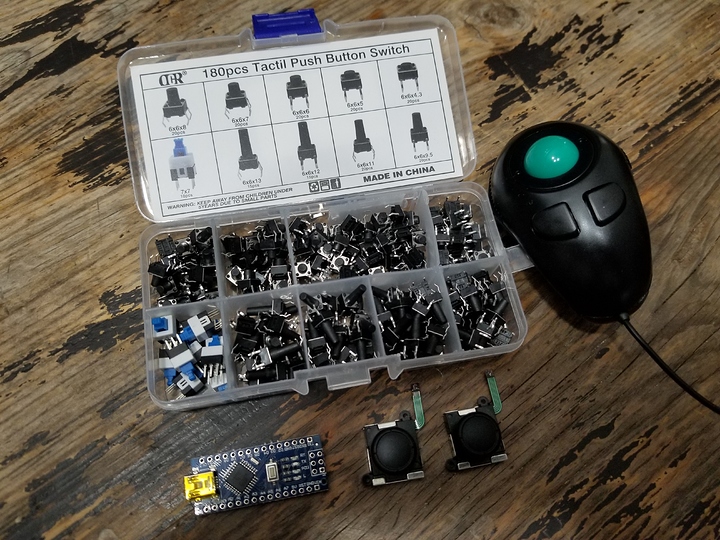 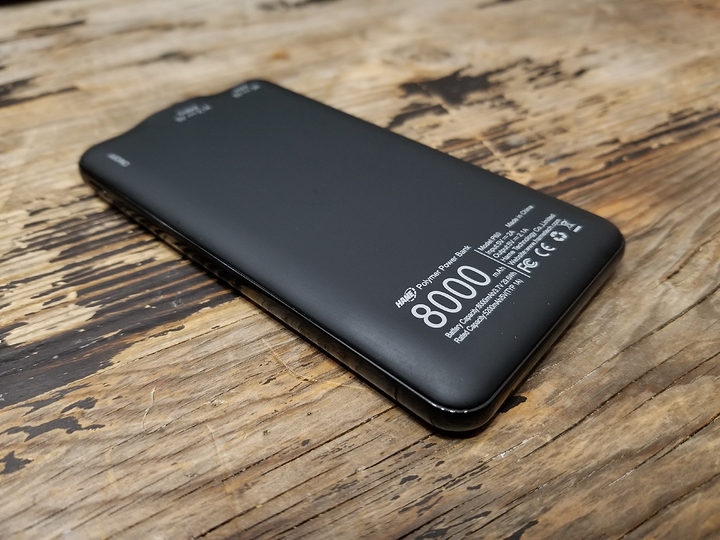 I’ve already been playing with the PC stick and I’m fairly impressed with it when playing games at 800×480 (same as my screen). It plays Minecraft over 50fps (unless it’s loading chunks), and I think I can get Borderlands running @ 30fps after I beef up the cooling.

I’ll be ripping everything apart, replacing ports with ribbon cables, and cutting parts of the monitor controller board off to save space, but at the same time I want better cooling, sooo yeah… It’s probably still going to be much bigger than I want.
I plan to use my fathers extremely nice carbon fiber 3D printer (thin and strong walls), and maybe plexiglass to hopefully make a nice looking case to Tetris all this hardware in to.

My inspiration is a PS Vita (sorry for the lights, there was just too many reflective surfaces). 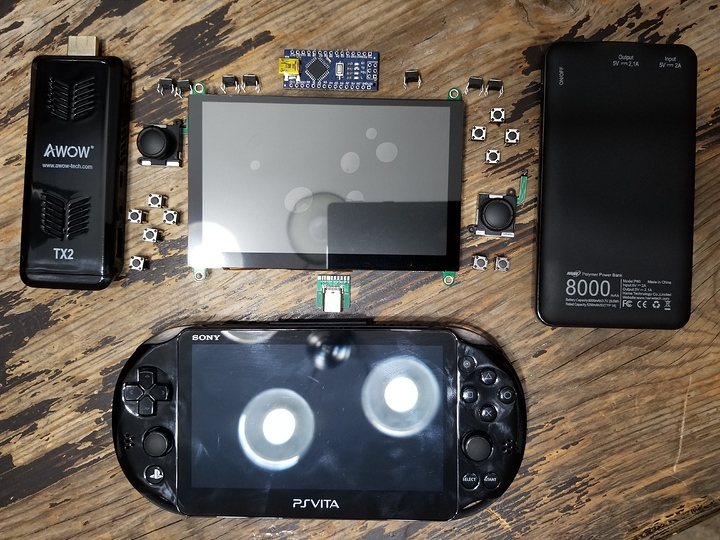 I am excited to see how this all turns out and works, especially if it works well and you do the upgrade later on.

EDIT: Also put yourself in for the Just Do It with this.

So I’ve hooked up the screen, and what is this fuzz? 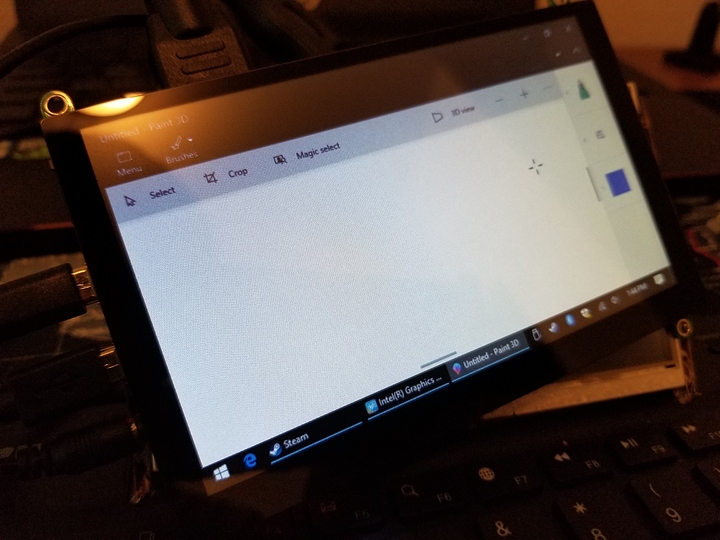 I’m probably going to have to ask this in another thread, but figured I’d post it here to keep you guys up to speed with what’s going down.

Edit: just tested it on similar low res screen, and it has the same thing. Guess it’s just something you have to deal with these cheap displays.

Is it under the digitizer?

Yes, that is how I have always known it.

Though it is worth checking what way round the RGB is, if its actually RGB or BGR or GBR or anything else. This can cause weirdness in screens.

edit: Or it could be PenTile… shakes fists at sky PEEENNNTTIIIIILLLLEEEEEEE!!!

Despite being very delicate, I managed to break the digitizer when I was trying to remove the monitor control board, so I no longer have touch input. There’s no visual damage, and there wasn’t any popping or cracking when I was removing the board… IDK.
Guess I’ll rip the PC stick apart next and see what I’m working with in there. I got some recordings of game play for a base line to compare against my (hopefully) upgraded cooling.

Downloading Horizon 3 just for kicks. I don’t expect it to play at all though. Lol 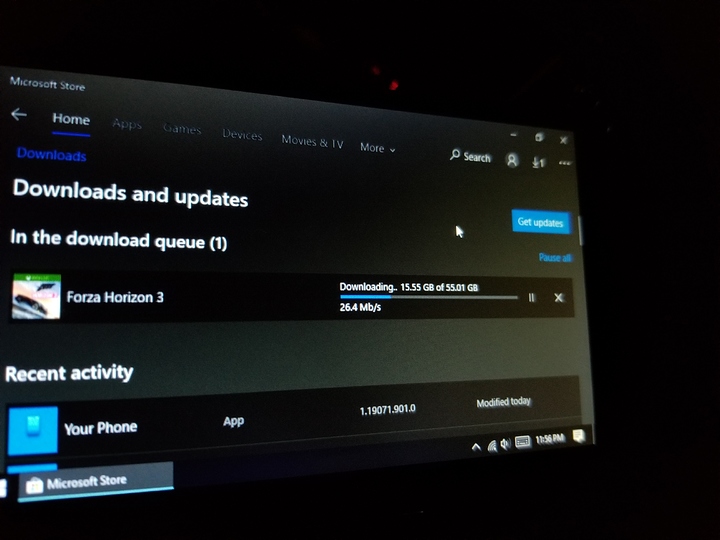 Edit: I should have mentioned I’ll order in another screen.

Attempt Steam Play on Ubuntu if you can afterwards. You could also try Steam Remote Play and see how that works.

LowSpecGamer has been looking into x86 handhelds as well, so he might be worth checking out for some insight:

I’m down to give that a try, but any particular reason to use Ubuntu? I personally think Ubuntu is trash. I have been wanting to give Pop OS a try, but I still don’t like that it’s Ubuntu based.

You could also try Steam Remote Play and see how that works.

This works surprisingly well. I gave it a try on this, and I’ve had worse lag on a TV before, and that was streaming with both PCs on Wi-Fi. Lol
I’m pleasantly surprised, and it would be just fine for racing games. Shooting games it gets a bit harder. I’ll see about recording it.

Tried FH3 and all I get is this message. 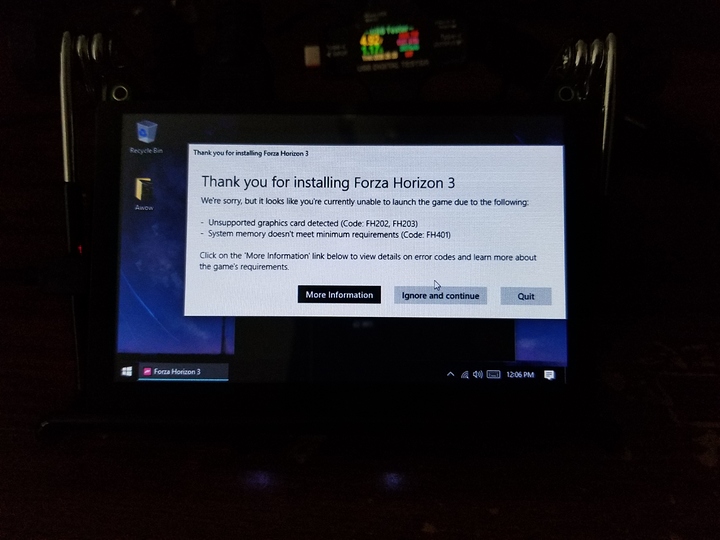 Soo… Have a slideshow of me playing Black Ops 2. Lol

It was very easy to pop the top off. Just stuck my finger nails in the crack and pulled. 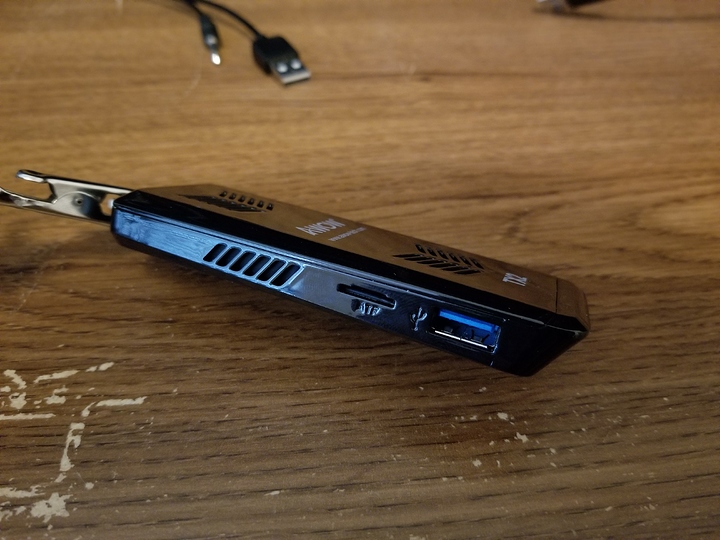 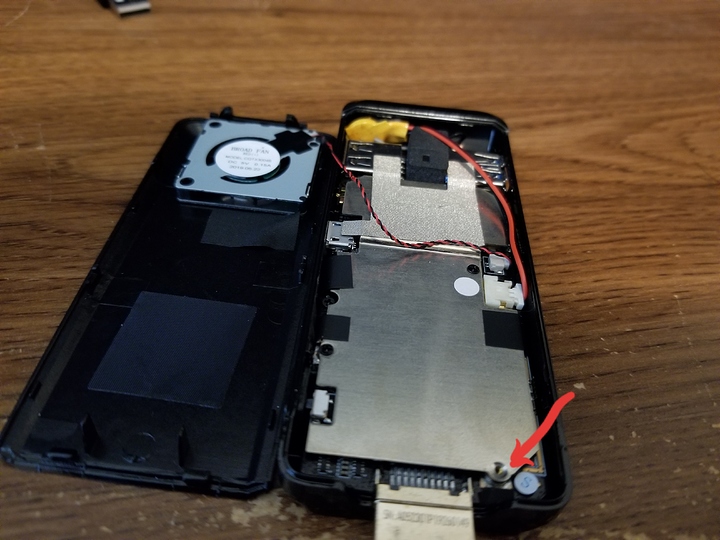 And here’s the board out and flipped over. 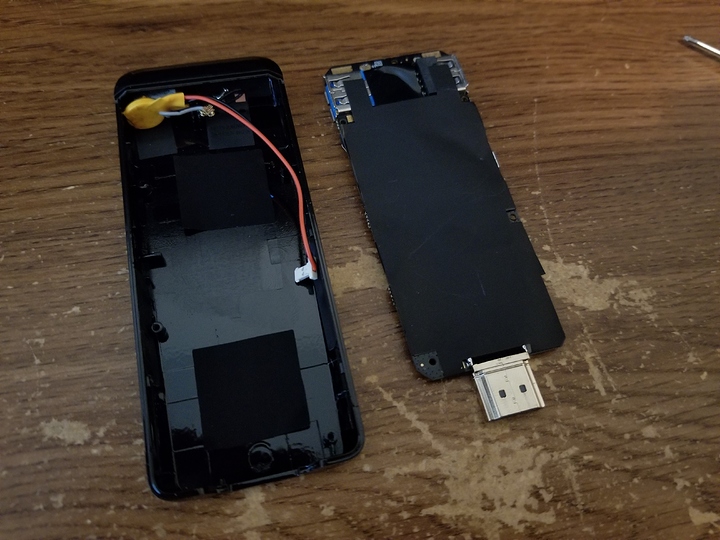 I’m going to see about rounding up some proper but temporary cooling now.

I pulled the heat spreader off and it appears that manufacturers are using toothpaste for thermal compound. Lol 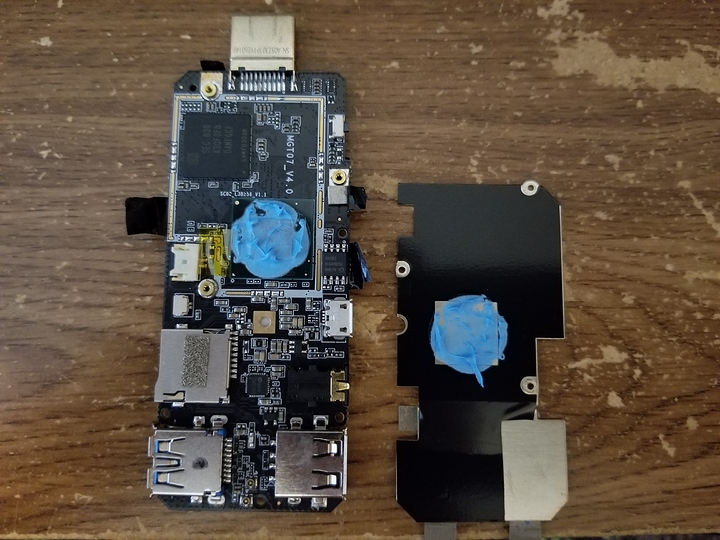 Got that all cleaned up. 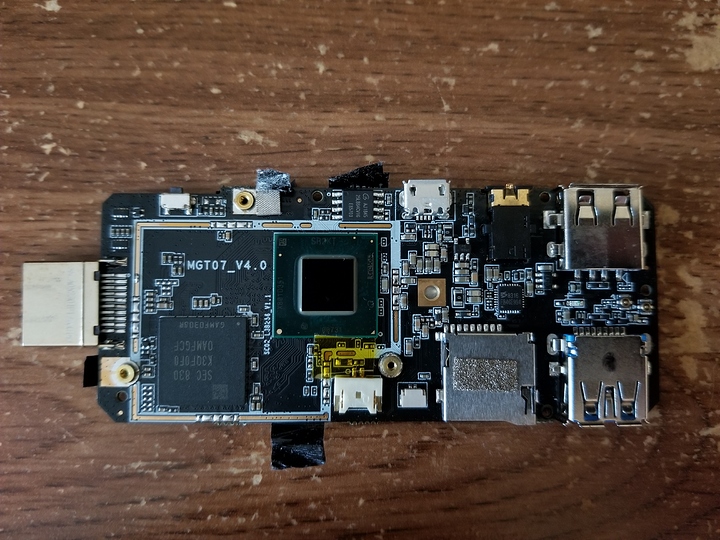 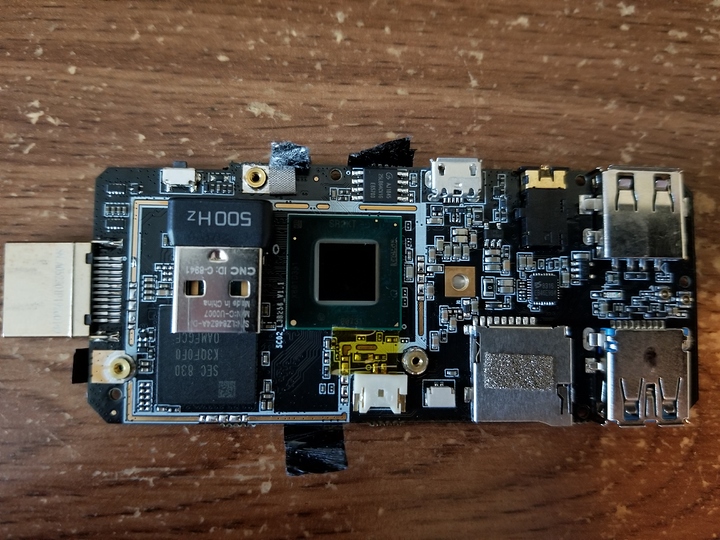 I’m going to use the same heatsink and fan as I did on the Surface Pro 3, but one of the screw tabs are in way, so I’m going to cut them both off. 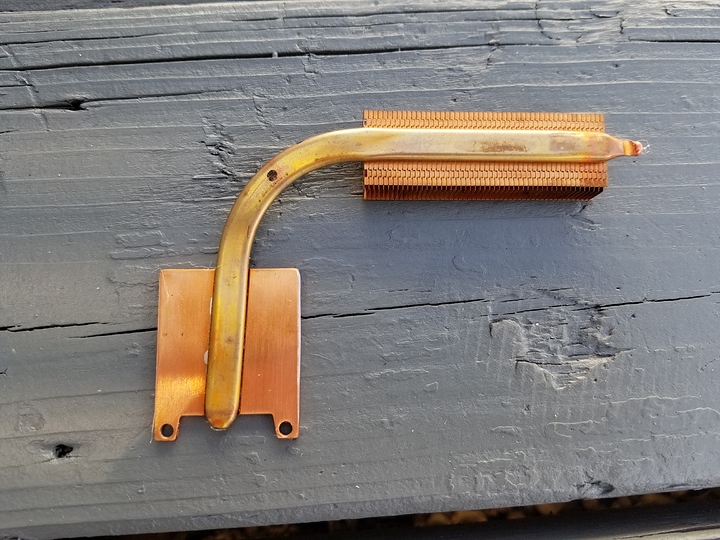 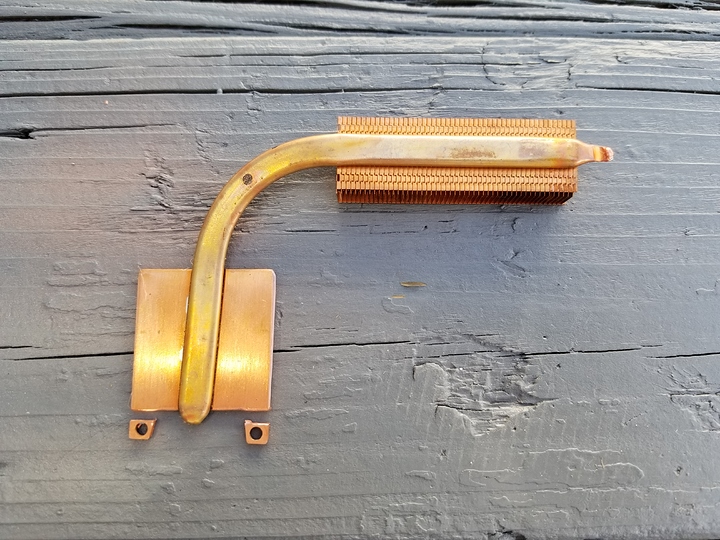 And it appears to fit, but the standoffs for the heat spreader seem to be a bit taller than the CPU, so I’ll use a generous amount of compound.

(Just did the test fit and add a tad more compound) 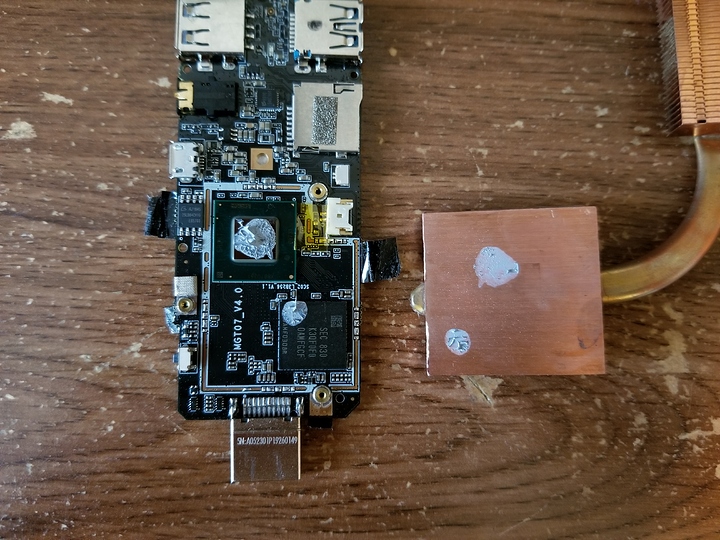 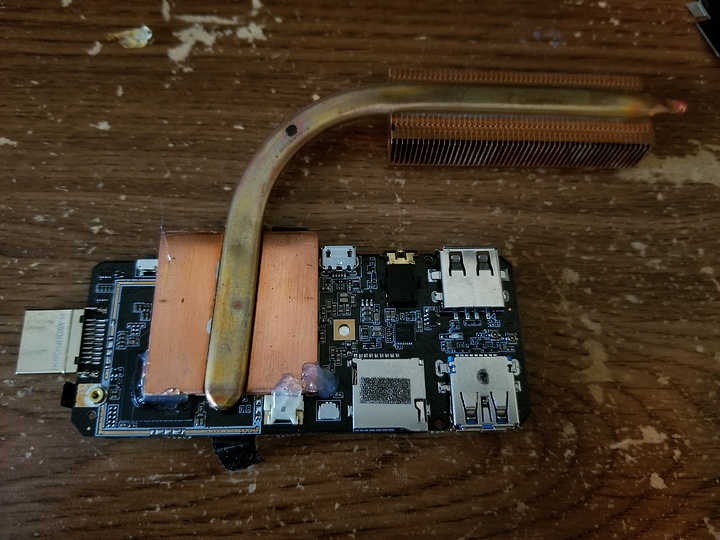 And a tad bit more hot glue later, and the temporary cooling is done. 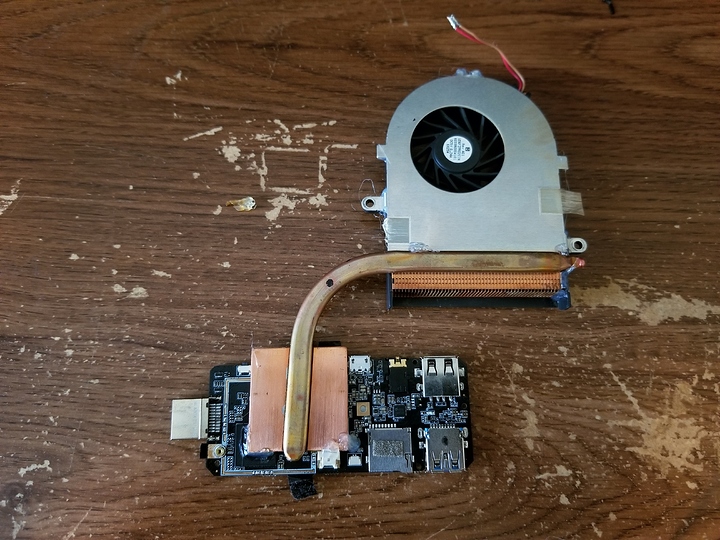 That COD is impressive, slow as it might be it is better than I thought.

For the board when I saw it taken apart my first idea was something like an m.2 heatsink both sides. in a perfect world a machines block that would be a replacement case and heatsink all in one with the mini fan blowing through it.

Was not expecting what you did though, even better. Are you gonna hide it on the back of the monitor, or is there room enough for the whole thing on there?

That COD is impressive, slow as it might be it is better than I thought.

I repeatedly find my self think the same thing. It’s slow, but man is it better than I thought it would be. I didn’t actually expect it to play CoD.
I’m attaching it a bit playing FPS games, but it’s played all the top down and platformer games I’ve thrown at it, and it plays them all 50+ fps.

For the board when I saw it taken apart my first idea was something like an m.2 heatsink

Good idea, I’m going to look into those, but this board is a fair bit bigger than a M.2.

in a perfect world a machines block that would be a replacement case and heatsink all in one with the mini fan blowing through it.

I am a CNC operator, and my father is a CNC programmer so it not impossible.
This CPU will run all the way up to 90c so I’m concerned about comfort. I was going to try and keep the heatsink on the inside with plastic insulating you from the heat.

Was not expecting what you did though, even better. Are you gonna hide it on the back of the monitor, or is there room enough for the whole thing on there?

This isn’t the heatsink I’m going to use, this is just to give me an Idea of what I can possibly squeeze out of this thing. I’ll most likely poke around on eBay until I find a heatsink that looks about right.
I might make one, but I would like it to have a heatpipe.

That is some tiny CPU/GPU there and an overkill heatsink if I ever saw one.

Oh my gosh, I just took everything back apart and put the stock heat spreader on trying to troubleshoot why it kept crashing everytime I hit the start menu, and it was the micro USB cord I was using for power. Hahahahaha

I’m just glad I didn’t break this too. Time to do all
mods again.

Fortunately I got a couple female USB type-c plugs to put on this thing when I’m working on it’s final form.

Guess while I have it apart here it is next to a Pi 3. 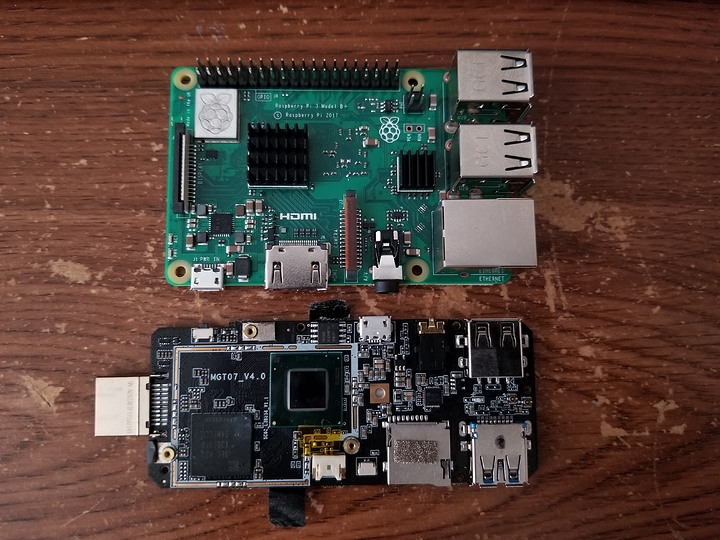 Holly crap. It can play Black Ops 2 with what I’d consider to be almost a reasonable experience! Average 33fps, but there is something funny going on because there’s really bad input delay. I think it’s this screen because it has some auto upscaling nonsense in it.
I’m looking into using other screens right now like an OLED phone screen, but the control board is kinda large.

Here’s the CoD gameplay. Notice the GPU is the bottleneck instead of the CPU this time.
(sorry I forgot to set the ISO so it’s really washed out)

Looking through your thread, you seem to have a different version to the Adafruit 2232 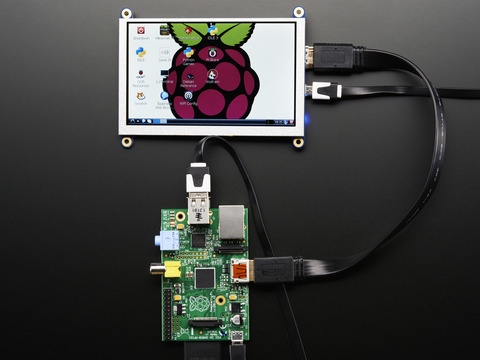 Its a mini panel-mountable HDMI monitor! So small and simple, you can use this display with any computer that has HDMI output, and the shape makes it easy to attach to a case or rail. This ...

Edit: Shame yours does not have a TI chip but a Realtek one, else the documentation would have helped

I think I’m going to go with a MIPI screen next. 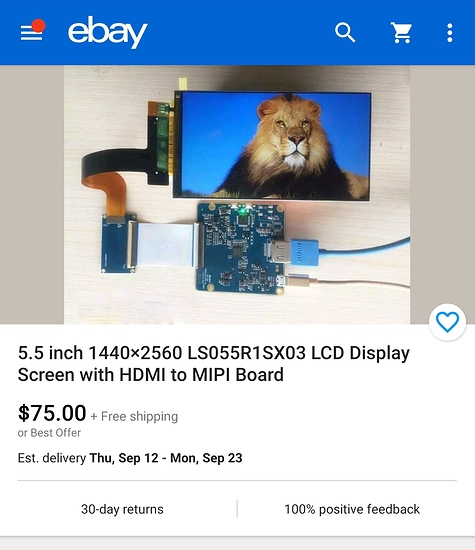 Right now I’m trying to figure out what to do about touch. 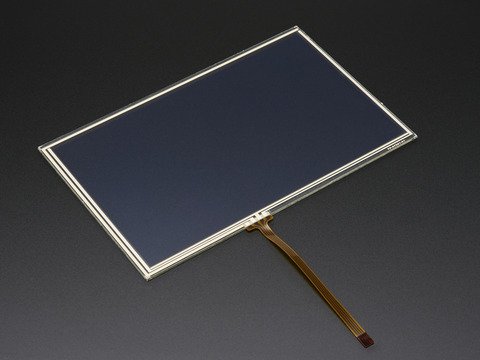 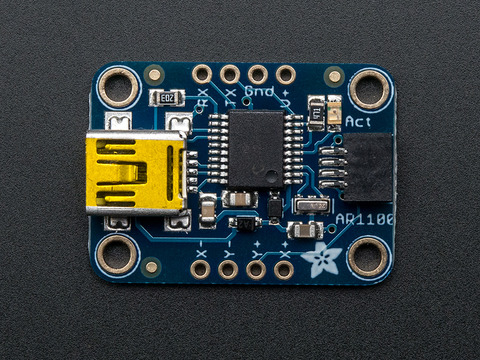 Getting touchy performance with your screen's touch screen? Resistive touch screens are incredibly popular as overlays to TFT and LCD displays. If you want to connect one to a computer ...

Thanks for the input! I am looking for capacitive touch, and it seems it’s often built into these MIPI displays. Trying to figure out how to use it with windows. I remember seeing similar overly touch panels with capacitive touch, so I might have to go that direction.

I’m looking into using other screens right now like an OLED phone screen,

You will almost certainly end up with PenTile in that case unless you get one of the very few OLEDs like the Note 2 screen. I am not sure how windows or the controller would deal with this or if it can at all without being a mess, after all it will be missing a good chunk of one of the subpixels, usually blue. Worth looking into before putting money down.