I've got a question regarding the electronic circuit I'm working with.

I wanted to start playing around with some solar panels and started my first simple project.
A charger with some rechargable batteries and a step-up circuit for USB to charge my phone with solar energy.

This is the setup, I have so far that is working, when the sun is up:

Now I'm thinking: is it bad for batteries, when the voltage I'm charging them with is lower than let's say 3V. Is it bad for them? So if it's not any good, when the voltage is very low because the sun is pretty bad or whatever, should I turn off the solar cell?
Then I could put a transistor in the circuit or something like that. (I've got a bunch of BC547 here)

So what do you think people?

Great idea. Just some things to consider:
-USB is 5V (as most micrcontrollers)
-your average loose solarcell delivers 0.5V when there is light, the current is what differs

10 solarcells in series will deliver you 5 volts. Depending on the type, you get somewhere between 30mA to 800mA. So you want to controll the current used to charge the battery. 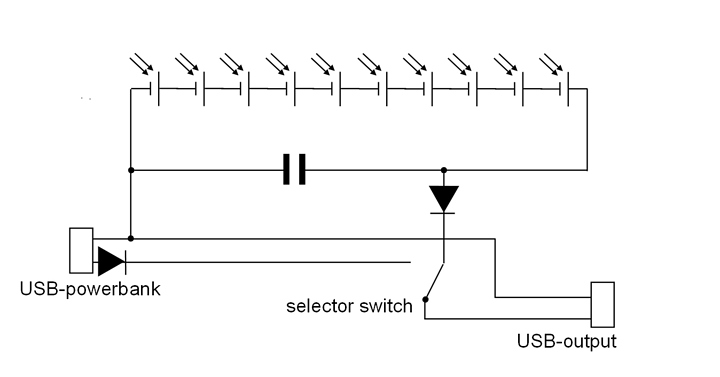 Hm, I have the components already here and when I run some tests with the solar cell, I get about 6V most of the time. But when there are a lot of clouds, the voltage of the solar cell drops a bit.
So there is a bit of variation, as it seems. That's why I thought of it.
But I guess I could have asked the same with the current. So is it bad for batteries as well, when the current is very low?

For the 5V for USB I wanted to use the step-up circuit to always recharge with the rechargable batteries and not directly through the solar cell, as there can be variation at voltage and current.

One Question to your graphic: what role plays the capacitor exactly?
I'd be very thankfull, as I'm just starting out designing some basic circuits and learning with that :)

If you get 6V, that means the cell is not just a cell but a module.
The battery will be fine, but a charging circuit would be helpful. The current only determins the time it takes to charge the battery.
The capacitor is there to "streamline" the output from the solarcells. There was also a circuit-thingy (which silly me forgot the name of, but I remeber if having three legs) that steps down the volltage to 5V no matter what happens.

Ah yes, it's a module, not just one cell.
Thanks for your suggestions and help :)

The 6v depend on the internal resistance of the modul, i guess you mesured the 6v without load on the modul?

Without load, it was something over 6V.

I just measured it within the test circuit I've built and it's 5.1V
But I have to say that it is 9:47am and the sun is barely to see, where I am.
I'll measure it again, when it reaches a peak at about 3pm - 5pm

I suggest that you calculate the internal eesistance of that modul if it isn't written on it somewhere.

There are a few methods for calculating, drawing isnt that acurat, shorting can damage it.
That only leaves one of 3 you can find online.
Read carefully!