Building a PC want to know if specs are ok

and I was wondering whether these parts would be fine for it (mostly wondering about how good the motherboard/cpu are since the rest of the parts I'm sure will work fine), I'm not going to be overclocking it, all I'm going to be doing is setting it up for a XP/Win 7 dualboot because he still uses DOS for a program that works better than other ones he's tried that don't require DOS 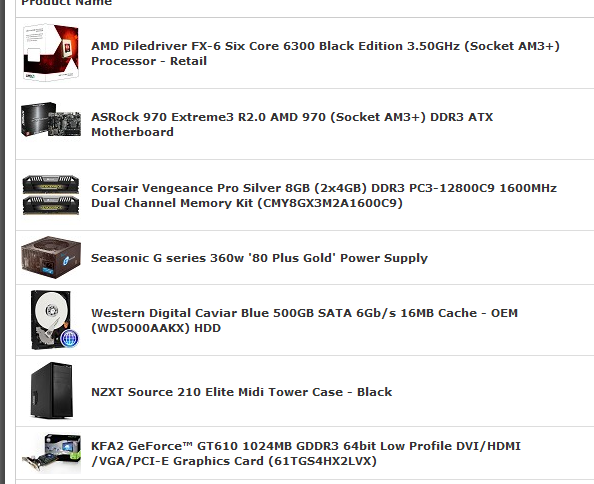 Any advice/help given will be appreciated

The motherboard for that is a little overkill. If he is using Bender, I would advise to get a better GPU. Whats the budget?

Realistically there's no way to make a PC last 6-7 years without changing something. I would go for a higher capacity drive, maybe 2TB. Seagate makes one that's $80. I agree on the overkill mobo.

If you are not around to change some things, I would go for a WB Caviar Black, since it has 5 year warranty. I heard that GTX610 are terrible value for the money, I think you should investigate a little more.

Firstly, thanks for the replies!

Personally I just the 610 in there because it will run Windows 7/8 fine and he doesn't game so its not really a problem, I just wanted Win 7 to show up properly without any weird graphical glitches because internal graphics. I was thinking about an APU but I wasn't particularily sure if that would be a better choice here (it would certainly be cheaper) because I want as low failure rate as possible.