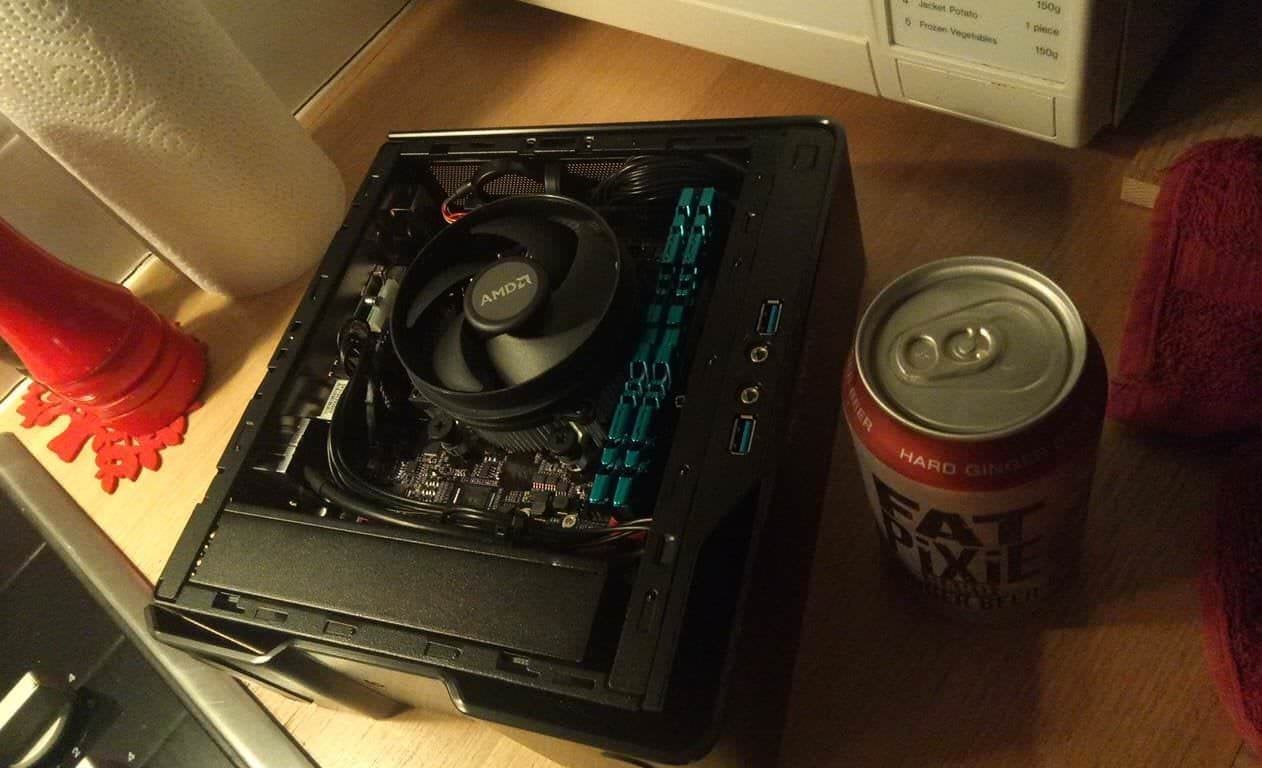 2200G build in the Inwin Chopin (previously suggested by @cityle). Drinks can for scale.

That is a really impressive little machine.
If the case wasn´t as expensive, it would be a great option.

You could probably get away with an Athlon 200GE at 60% the cost of the 2200G. It would be enough cpu/graphics power for this use case.

Just giving you options, I would probably go for the quad core.

Make sure the Fans blow in and not out.
Old people don’t clean their PC so this will make your job easier.

Less that 550 USD and small. Wifi built in, good ram speed and storage, should do fine.

603€ after replaceing unavailable parts (and shaving off 10€ on the CPU cooler)
https://de.pcpartpicker.com/list/dg4gpG

anti virus with real time scanner saves you lots of hassle in dealing with crap on non techy peoples pc’s, but it comes at a performance cost (but you could also argue that as long as they are doing nothing particularly demanding then they would never really notice the overhead).

its by no means bullet proof but it really does help cut down on family IT cover.

Let’s not promote Linux in this guys thread.

We don’t need it going down hill and off topic with Linux discussion.

But if OP likes the idea of Linux then it will of course be right to talk Linux. But let’s let him bring up the idea of using Linux on his own.

The last time I did a full rebuild for her, it was a Haswell i5 with 16 GB of DDR3-1600 and a New-Old Stock OEM Dell/Alienware GTX 760 1.5 GB from a reseller on Ebay. I went with a new NZXT case to RAID a pair of SSDs I had which mount on the PSU shroud by the window because the performance was way higher and way less expensive than buying a fast drive and LED lighting was requested.

I generally re-cycle my previously used parts into her builds, or I find stuff during sales to occasionally make incremental upgrades until it is either maxed out or not worth upgrading.

Edit:
She mostly uses her machine for webmail, Microsoft Office, YouTube and iTunes. It boots Windows 10 now since the previous Windows 7 key was locked to an old HDD which eventually died.

I hope by RAID you meant mirror, because striping SSDs on a PC for your mom is crazy-sauce.

10 years ago i built one for my mother ( i forgot what i built into it) but she was a great lover of fine woodwork, the entire case was covered in fine cherry veneer, and the keyboard and mouse tray (slide out) were made from light oak and medium ebony.
after she passed on my older brother got the computer and desk so i dont know what happened to it.
I wish I had gotten photo’s of it.

I won’t find any way to really disagree with anything you said. A quad core CPU with better graphics will definitely make a difference at some point.

I don’t really see the need for any antivirus. I have only been using the Windows Firewall for my home PC for years now.

I would probably make an image of the newly installed (and updated) OS, along with any relevant programs that the end user needs. If anything catastrophic occurs I could jump in and try to grab any docs/pics/vids, and just flash the ISO (OS).

Thanks a lot for the help. i am going to go for the 2200G and a simple board.

i already decided on what i am going for. the rest is just little things.
i like the m.2 idea less cabels and stuff.

the linux route. had to come sooner or later. its nothing for me. and so for her much less.

yes its good but sometimes i just want a PC to play games with my friends with. and in my Experience linux just wount work sometimes.

tbh Mac OS is my favorite. but i am forced to use windwos for gaming and stuff. and yes i know there are ways to game on linux. but i dont want to fiddle with it for every game.

Let us know how the build goes!

I just finished building a tower for my aunt and she does play some games but her concern was wanting to get away from windows problems.
I installed robo linux ver 10.1 for her so she will have an easy transition to linux
as a side benefit that distro comes with a lot of great apps and is easy to configure.
but this distro has an added bonus for her husband, It comes packed with lots of VM capabilities and apps for that purpose
the only downside ive seen to that distro is they have no forum at this time.
Its a good one to try and if you have decent knowledge in linux you can configure things to your hearts content
the os is not memory intensive either, so that means you can dedicate more resources to your games and such.

used to be yahoo had an anti-spy and antivirus app you could download and it worked really good but the discontinued it.
back when i ran windows that’s all i used.
converted to linux after that and haven’t been back!

2 posts were split to a new topic: Building mother a new PC

Please start a need thread if you wish to discuss the topic.