peeps over at NoteBookReview were buying them to take the MXM GTX1080 for their laptops and re-selling the ZBOXs with lower end GPUs for cheaper.

NBR is the place for high end laptops and laptop modification info.

EDIT: here have a look at this

Thanks but I already check on that side. The ZBOX Series E would be perfect for my use case, if it was not for the fact it is 2 cm too much in width and length to fit inside the Dreamcast.

And a Deskmini GTX is kind of old and impossible to find (only one listing on ebay, 1200$ CAD for 3 years old hardware)

And now I’m just even more in doubt. If I go with the Deskmini A300, I will need to acquire a 3400G, because even with a GPU attached, it would not work with a non-APU Ryzen, and there is still no modified A300 bios that would enabled that.

So ya, I will try this weekend the idea to squeeze the GPU and ITX together, outside of the case, to see what I would really work with. I will look if maybe there would be space to add 40mm fans where are the heatsinks (or I could go always with laptop fans at worst to provide airflow) and test the thermals by putting a box over it. Using the flex psu as the power birck would help a lot in dealing with the limited space.

Otherwise I think I will just say fuck that and go with the PN50 and resolve myself to go back to sata ssd.

so here’s something interesting
3000 series desktop parts are chiplets and need huge L3 cache to reduce latency
but the 4000 APUS which run the archetcure of 3000, but with some differences

it has 1/4th the cache, but is also monolithic meaning no chiplets 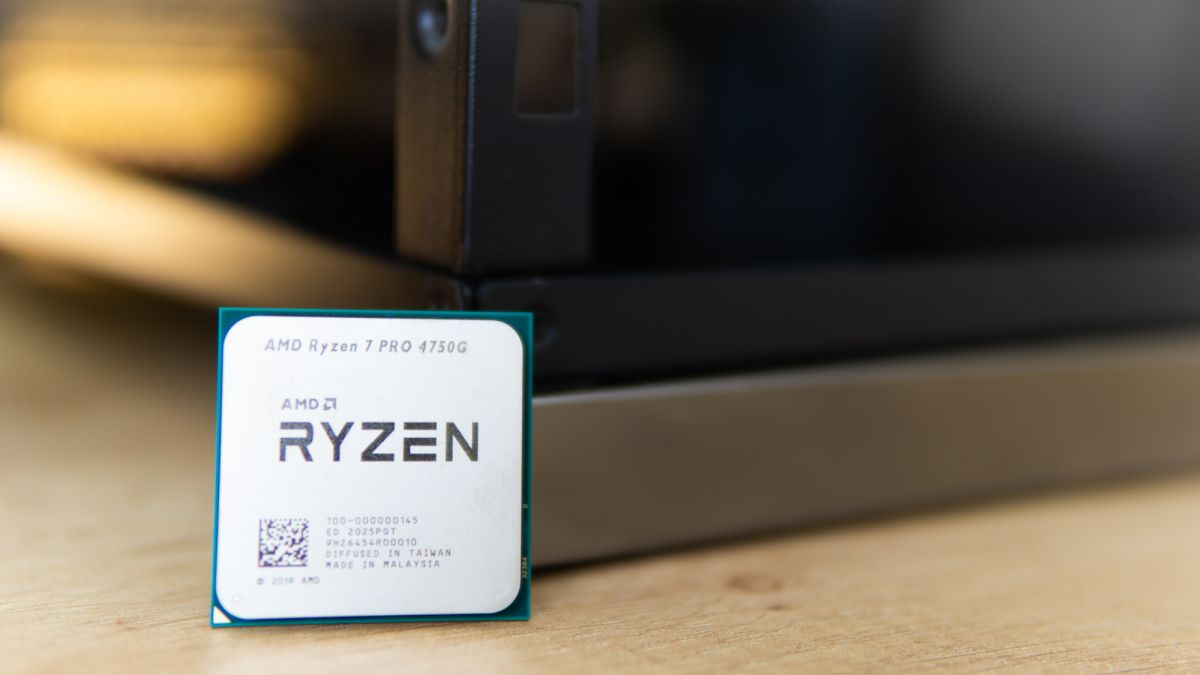 
@wendell this might be worth looking into the differences between it and a 3700X if you can get your hands on a 4000 apu
could have some interesting implications
3 Likes
cityle September 26, 2020, 8:18pm #24

That is what I have to deal with. Even with one fan for both cooler inside the GPU heatsink, I can not go lower than that (and I had to remove one ram stick) 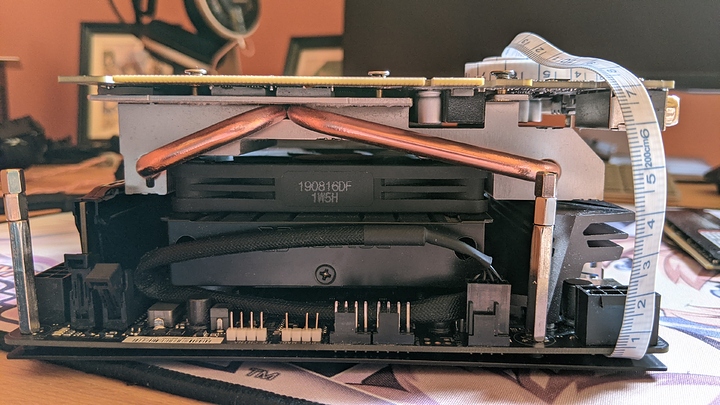 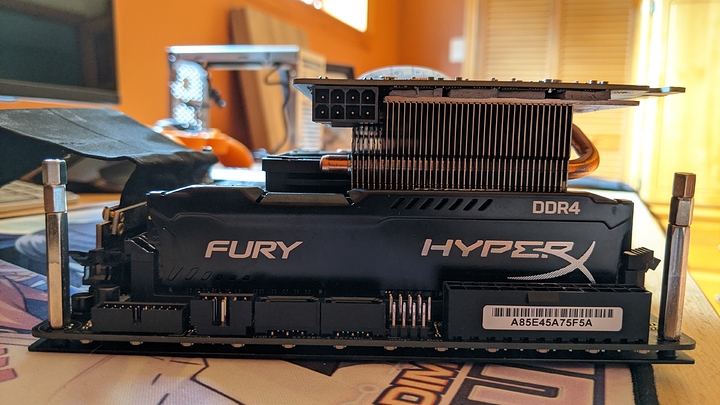 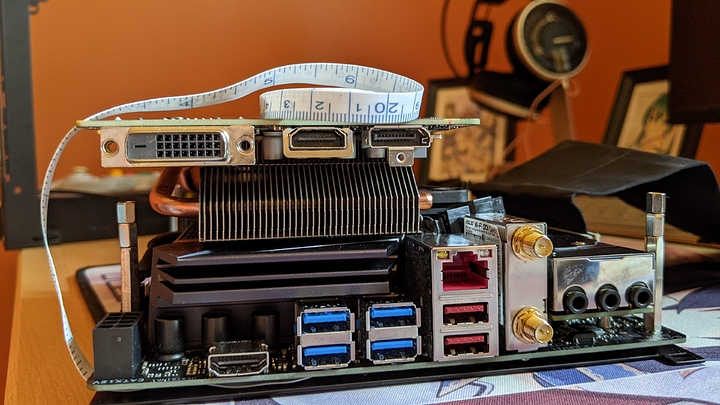 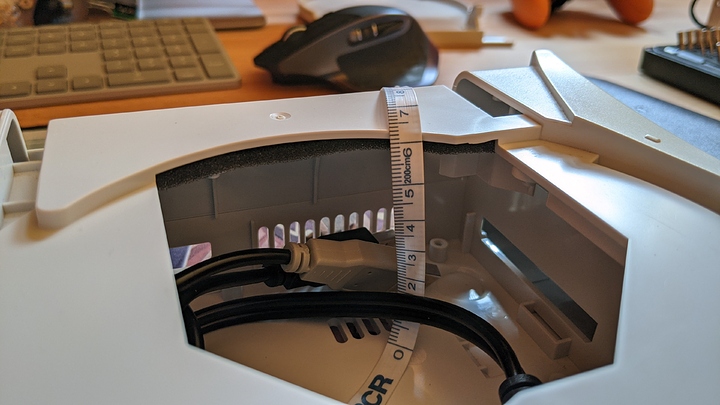 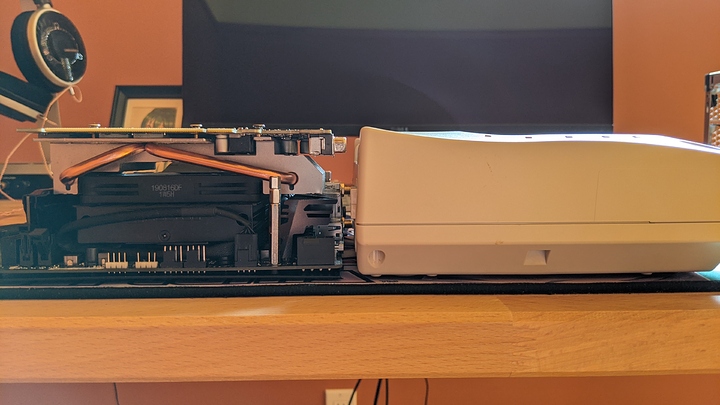 And a deskmini would not help in that case. I would still need to go for the low profile heatsinks with the fan inside them for both the cpu and gpu (like the other Dreamcast built did) to make it fit. But that would not cool a 3600 and a GTX 1660Ti.

So I think probably in the next days I will purchase a PN50, probably the one with the 4500U to put it with the GTX 1660Ti and a sata ssd (to my great dismay) in the Gamecube.

And I gonna afterward acquire a 3400G (or a Renoir if we can buy them at that point) for the Dreamcast and the itx board, to use the Dreamcast probably as a NAS/HTPC. That would allow at same time to safeguard more of the Dreamcast shell (including the very satisfying CD opening mecanism)

So if you see a Gamecube build log pop-up, it’s me

(or maybe I can combine both build logs here

N.B.: My GPU will fit in the Gamecube. Tightly, but will fit, will keeping the important bits of the power button/fan assembly and the OG connectors for the controllers. (everything is so much easier with a iFixit kit) 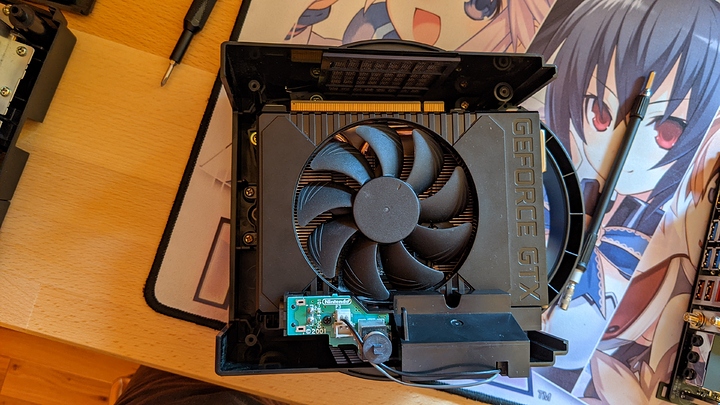 okay I think I can come up with a dedicated card solution, gimmie a minute
can you link me the exact card you have 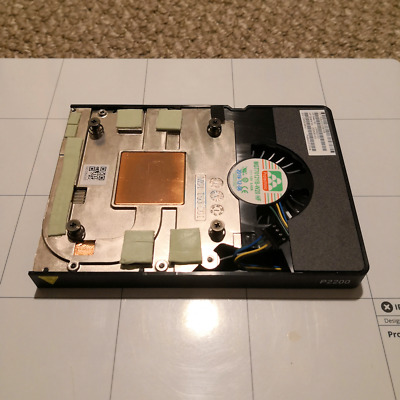 This is an unused Nvidia Quadro P2200 Cooler.


turn off recommendations on the right

Thanks, but now I feel like I’m only the bearer of bad news

It would unfortunately not work.

Where there would be more height clearance would be right above the SSD heatsink, but with the 34mm in width of a low profile card, it would probably interfere. And even if I remove the shroud and fans to make it 18mm in width, the 70mm in height would make it impossible to put it anywhere except on top of the CPU cooler, where the same problem of clearance arise. No matter how I look at it, I find no way to fit it even without the shroud. The mobo with the cooler alone occupy 50mm in height 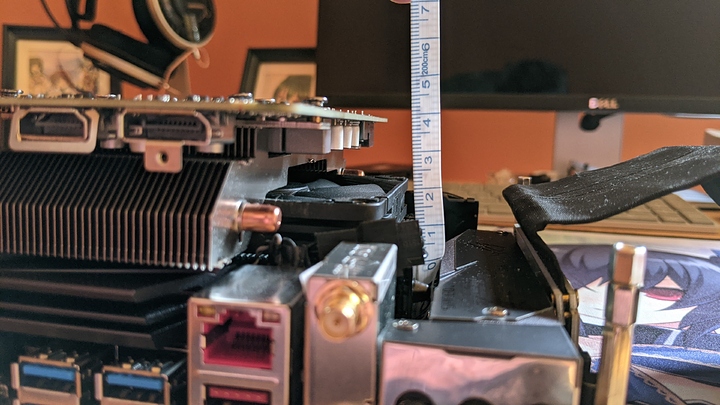 And the GPU how I tested it pretty much acted as if it was a single slot cooler sitting on top of the CPU, albeit maybe 0.4mm of difference (and the Quadro cooler would interfere with the power connector)

But good news on the other hand, I reread the inspiration build thread and found that 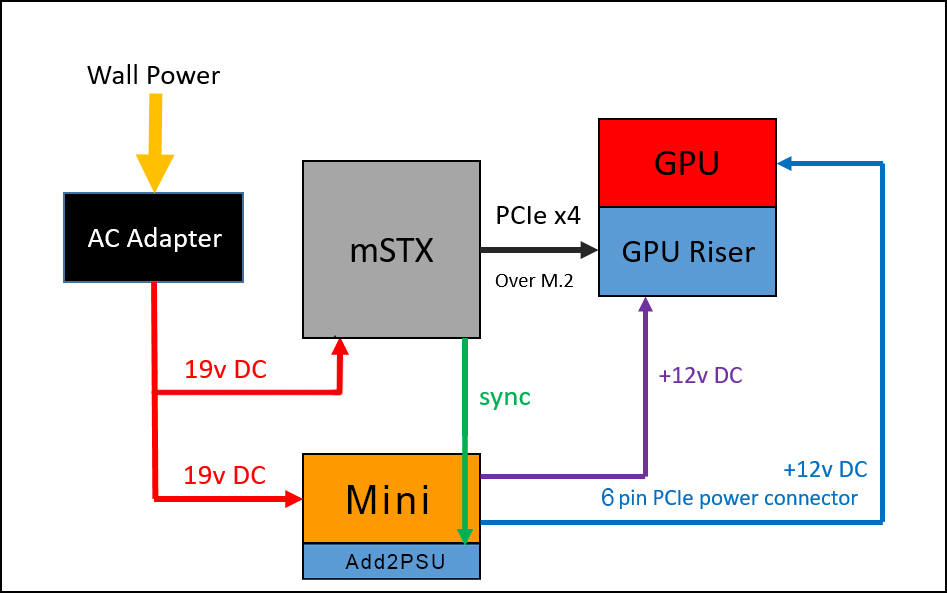 So update of the project, I will do the Gamecube and Dreamcast build log in the same thread as they are tightly intertwined.

Elmo will have double of his addiction!!! 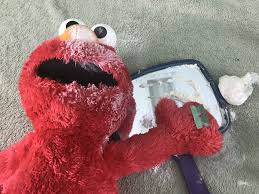 (Even the alphabet in the names kind of fit their respective console, with the curvy Hiragana for the Dreamcast and the boxy Katakana for the Gamecube)

Uzume, the Dreamcast build, will be a Ryzen APU build with my current ITX motherboard

But who is Compa? Well she is another protagonist in the Neptunia franchise (concept I know). I had the idea to do a build with her name since jayz2cents gave me the wild idea to do a rose gold NZXT H1 and she was the one that would have fitted the build. This time the Gamcube will be painted with Krylon Sunrise, the same color as my joycons. 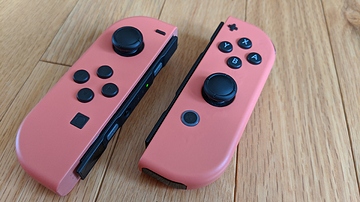 Still thinking about the use of each system, but now I think I will tend to go with Uzume as my main computer for run of the mill task and Compa as my gaming PC. But will see.

PN50s are currently backorder, so I will have to wait for it. And I plan to have both systems with functional Gamecube connectors too!

If you have any available HDPLEX 200W, let me know as I will need two of them! (and an used Ryzen 3400G wouldn’t be bad)

you can probably use that space for more features on the dreamcast build, maybe add some intake and exhaust fans, maybe bigger heatsink 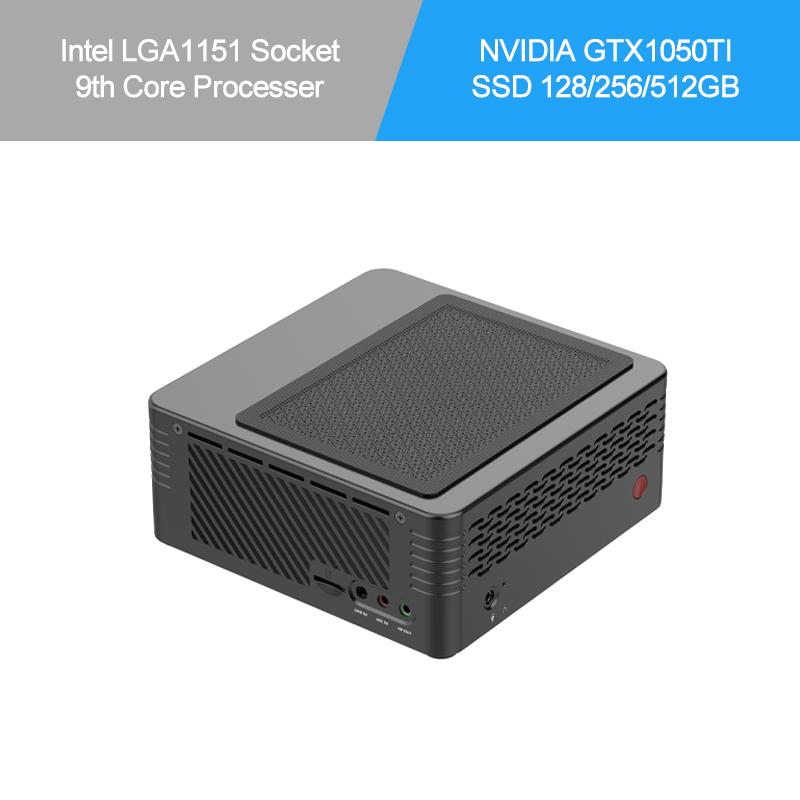 How do I ever imagined my initial plan would work?

Began today the modifications to the case to fit the itx inside it. (Took pretty much the whole day) 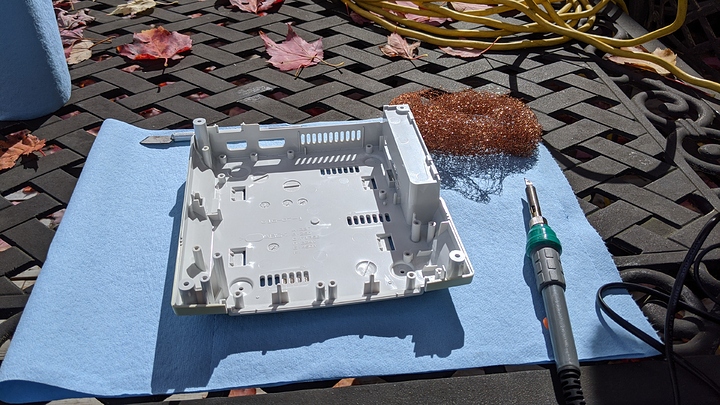 After consultation with my dad, I cut with the help of a soldering iron, because the plastic would probably have been too old and brittle to use a dremel. 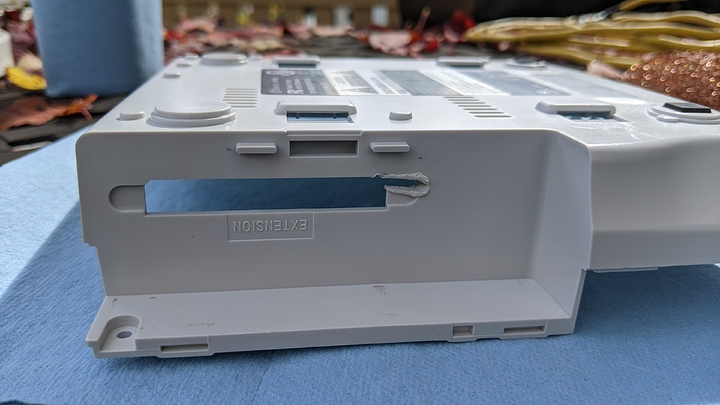 Cut all the space where was the line jack. Intend to glue the cover there to give back structural rigidity but I have a small problem on that side (see lower) 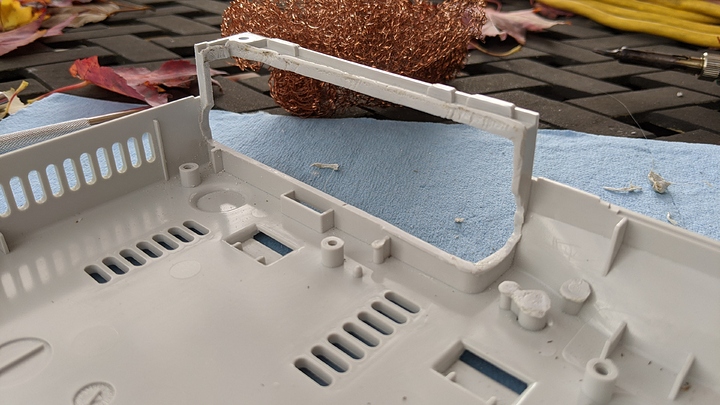 And I’m skipping a lot of step but at the end, I cut way more than I expected to 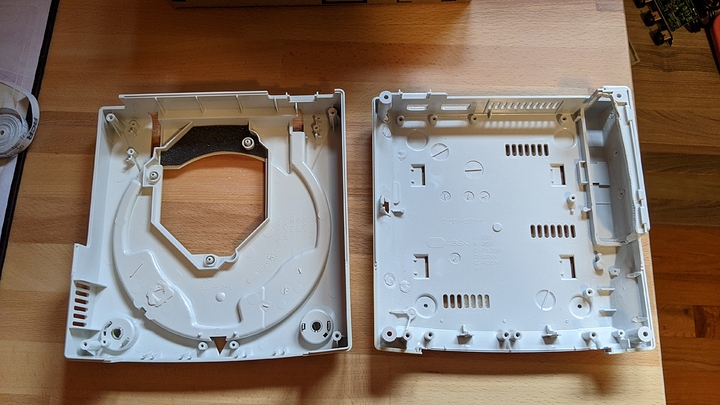 I even had to cut the upper part too for everything to fit-ish. Unfortunately, I could not keep anything of the opening mechanism to my dismay. Will even probably have to cut the gear of the disc cover as this one may interfere with the VRM heatsink. Probably will have to keep the disc cover in place with magnets, but I will try to find a way to make a compact opening mechanism first. 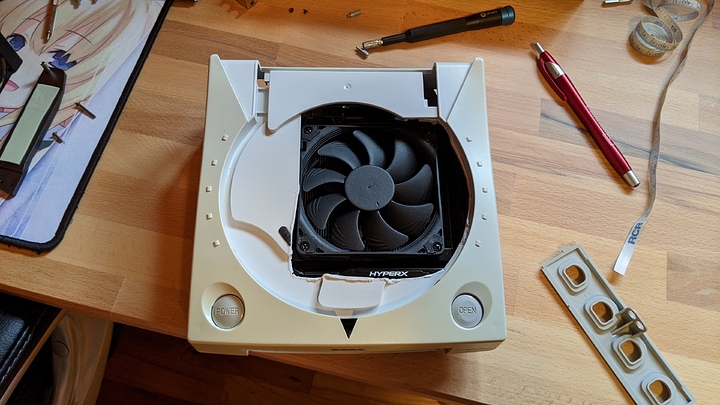 The rear io at the moment interfere with the back of the case, not allowing to close completely. AT the end I will just cut a rectangle there and put a mesh as it would simplify the process and give a better result (to do tomorrow). 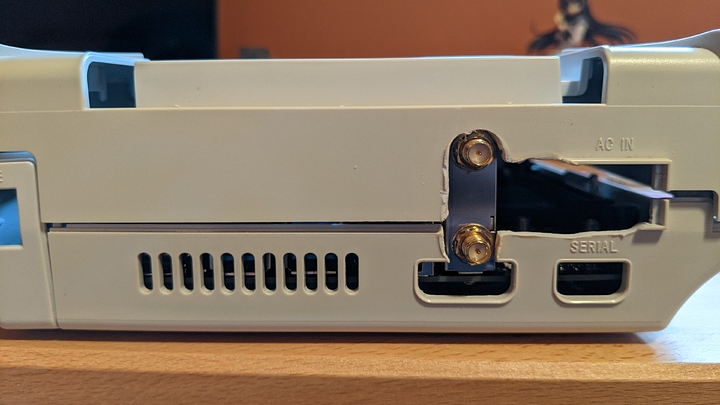 At least with all these cuts I was able to safeguard the four mounting points for the upper part to ensure the case to stay securely close. However, I noticed the screw hole where the line jack extension is only accessible when the cover is removed. But I want to glue the cover there to give rigidity after what I cut (And anyway the mobo will block the access to it). So I think I will maybe try to find a captive screw that I could screw in from the line jack opening (will be thigh). 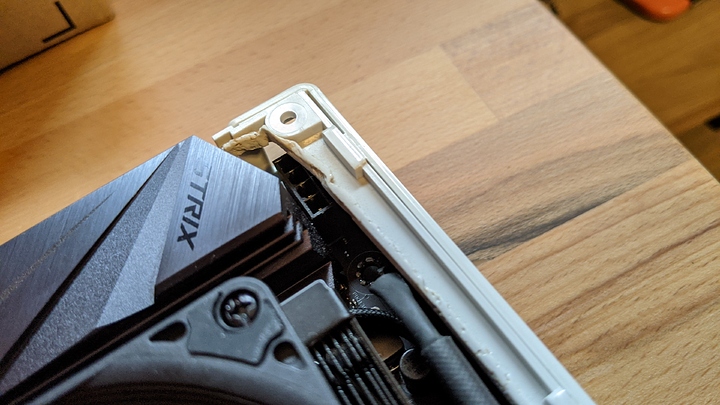 Will probably still be able to put the Gamcube adapter with some trickery (aka sanding of the port that I need to do anyway). 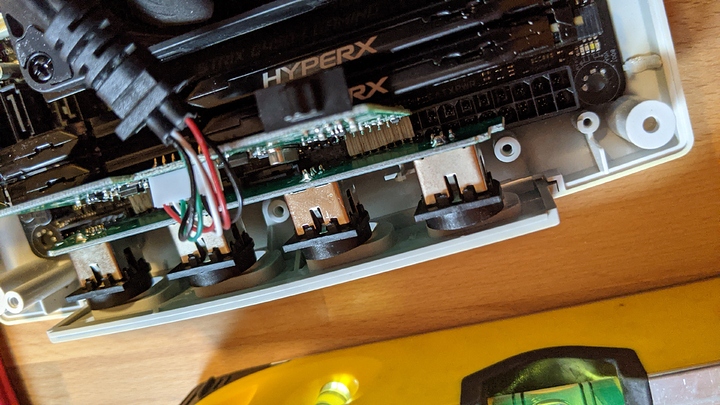 Done the opening at the back, not too shabby, but not perfectly rectangle 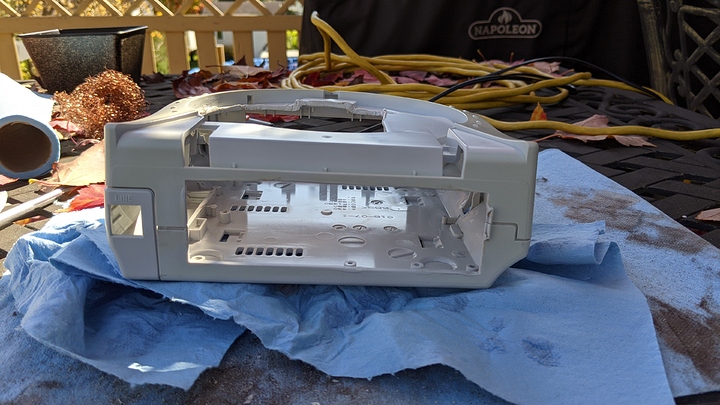 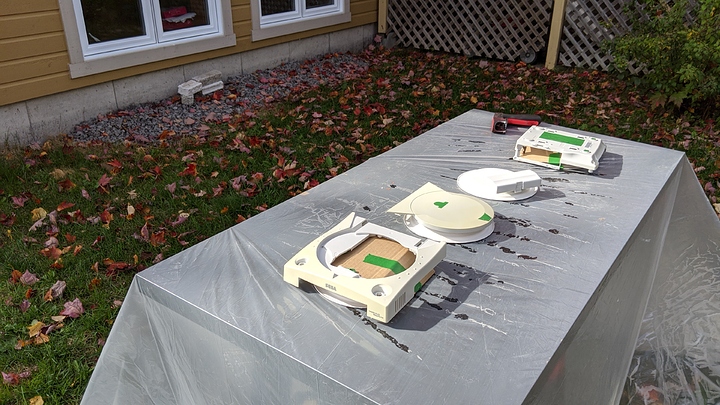 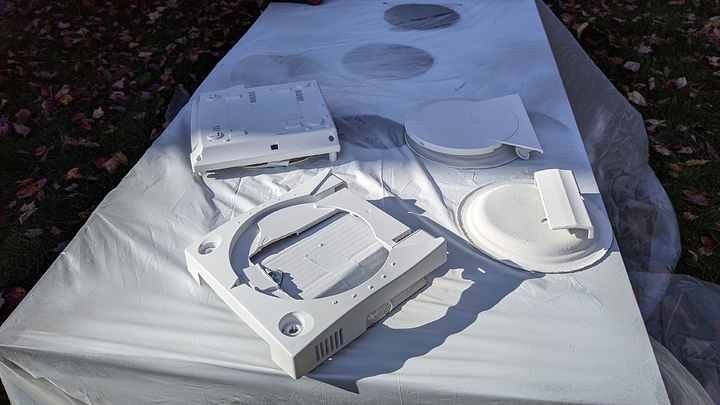 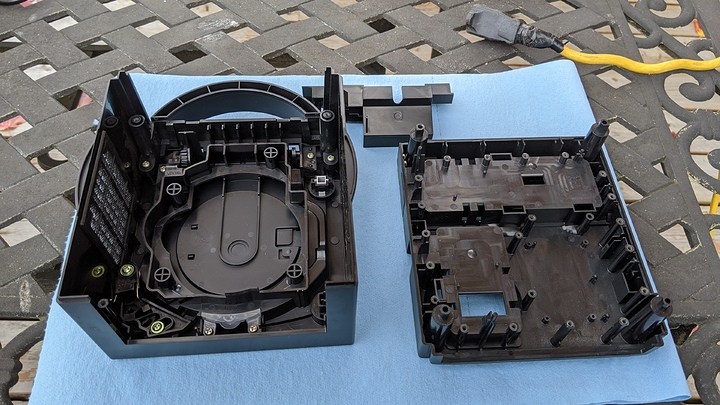 Cut the rear bottom space thing as there was no cover for this one. Reused some plastic parts to do the bottom with epoxy. 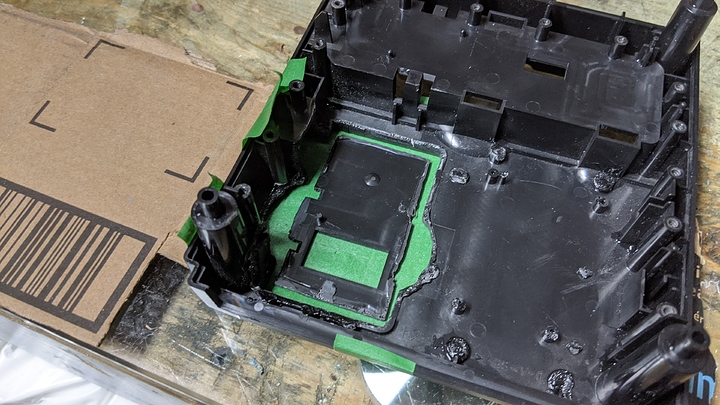 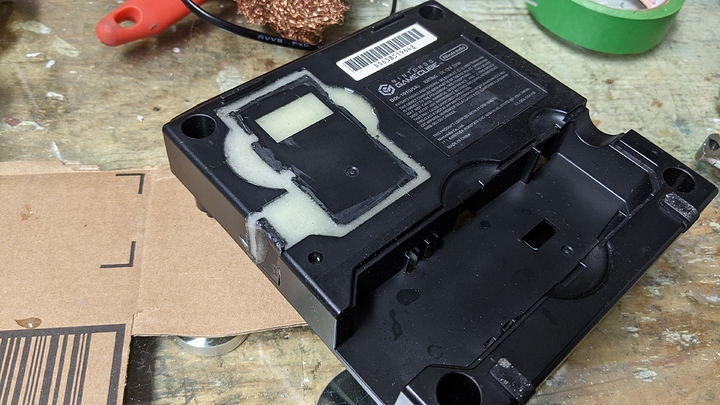 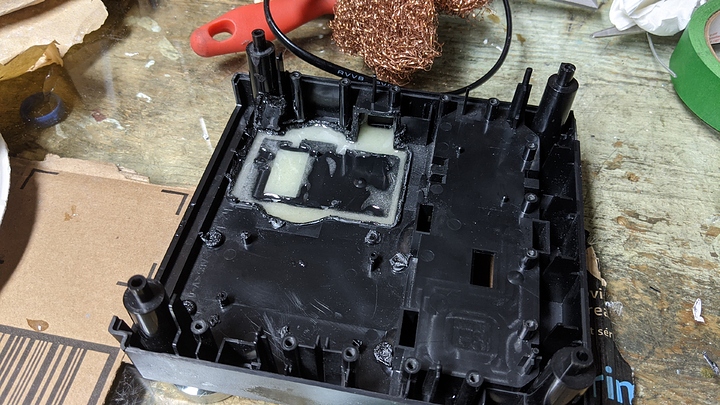 Will fix some irregularities and sand it so it will be ready for the paint.

RIP poor Gamecube, one of my fondest teenage memories…

I actually do have a spare GameCube my wife inherited from her uncle - I wonder if I should refurb that with original controllers and an NUC-alike AMD APU system? Waiting for the 5700G to become widely available, that should be able to emulate everything Wii U/PS2/XBox and below…

I saw a video showing an AMD Nuc alike running PS3 emulators so it is plenty powerful for that.

The Next Gen Minis! AMD Yes!

With only a NUC inside you would need next to no modification to make it fit. Only the backplates for the ports, like here.