In light of my ever-accumulating pile of hardware, I’ve decided it’s time to put together something from the bench into an actual working system. Sleepers are fun, but I want something else. Something worse, but with all the god awful Gamer™ RGB of a modern system. Something that looks like it belongs to a Twitch streamer but slaps you with Windows 95 when it starts booting.

80486DX2. NOW we’re talking. I want my RGB hub to have more processing power than the CPU itself.

And with that, let’s begin.

I’ve got three options here that I know are tested and working, all from a very similar generation of the 486 platform - after the introduction of VLB, but before PCI: 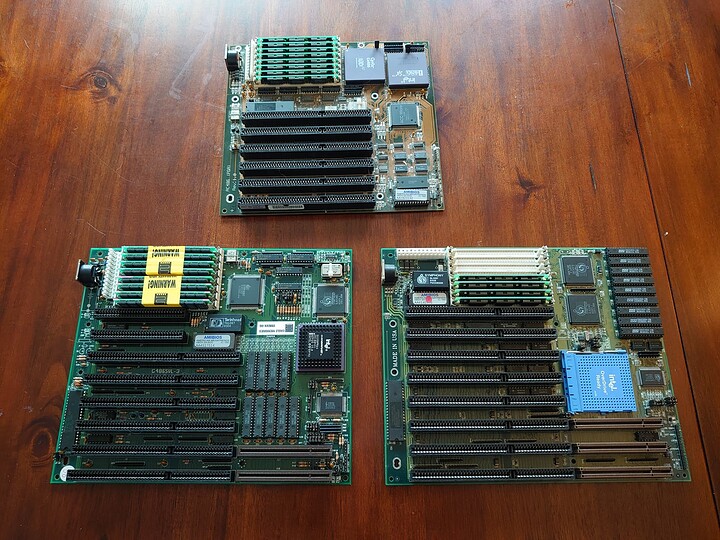 This is obviously a cost-down board marketed to IBM-clone manufacturers. At least that’s my guess.

Here’s the funny thing though. Because there’s nothing on this board other than a socket and some memory, this thing is literally unstoppable. It may be a glorified '386, but nothing will ever crash the board itself.

I picked this up NiB maybe five years ago now, and have used it on-and-off for doing benchtop testing of other ancient hardware I’ve stumbled across.

This one makes me sad. Socket 3, twice the max DRAM, and four times the max cache of the JoinData board means it puts the other two boards in the ground. But, there seems to be some issue with the socket… I don’t know if there’s a component lead that was trimmed too high, or a surface mount passive, but something underneath there folds two of the CPU pins over whenever the socket closes.

And so, I think I’m putting the good old JoinData G486SVL-3 in this one. I want VLB for the video card which we’ll get to later, and the only other working VLB board runs great but cuts CPU pins in half on extraction.

As for the CPU, the picture gives it away but I’m going with the '486 OverDrive that’s already socketed. I do have a socket puller, but of the options I have -

- that 80MHz Cyrix chip might actually be just a little faster. But, this is more interesting, so it takes the win. 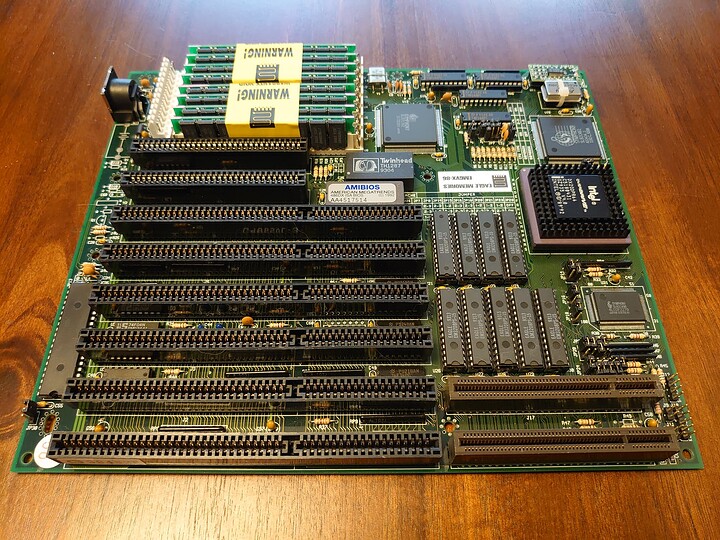 This one’s less interesting, because I only really have one choice on hand. 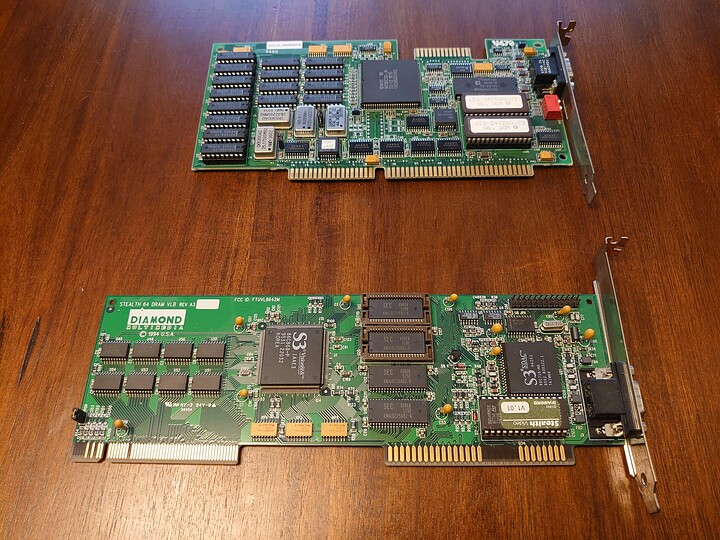 I have very little information on the origins of this card. I see many different versions of it from differnent system integrators/OEMs of the time, so I’m guessing there was a reference version of the Western Digital Paradise VGA adapter that was passed to them for their designs. The FCC identifier points to Philips, so I’m guessing this was their version of it. The WD90C00 VGA controller makes it an extremely slow card good for 2D DOS applications. 512KB of memory populated.

The card I picked up specifically for this system. The S3 Vision868 was a slightly improved Vision864, which was one of the last and fastest accelerators on the VLB platform if I understand correctly. Still no 3D acceleration until the S3 Virge in 1996, but it did have a lot of GUI acceleration options for Windows and it did great the one time I had a chance to test it. There are faster cards on the VLB bus, but this is about as good as it needs to get for this system.

So, I’m obviously using the fast VLB card with the VLB-capable system. Moving on.

…So I have a lot of Sound Blaster 16 variants and clones. I’ll cut it down to the two most interesting options: 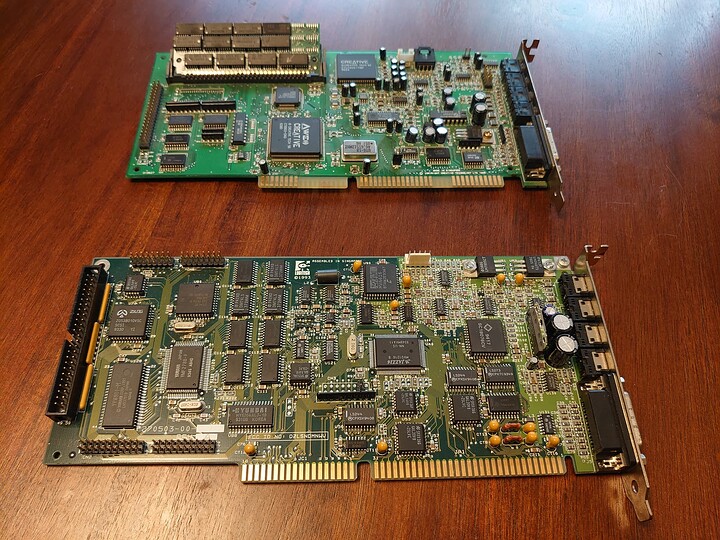 Unfortunately I used to have an AWE32 CT3990 - the massive full-width, full-height version that was an early model - but it sadly died in use a couple years ago.

I love this little card. It’s loaded with the max 32MB of DRAM which means it has as much memory as the rest of the system. With a good SoundFont this thing will absolutely beat the pants out of anything else I own. Has Creative’s copy of the OPL3 but unlike a lot of people that apparently feel strongly about it, I really don’t care.

Option #2, not because it’s good, but because it’s unusual. There are SB16s everywhere, but this thing… not so much. It’s a fascinating pile of weird hardware glued together.

One of the earliest OPL4 cards, with the full Yamaha wavetable synth. MediaVision chipset. That’s the highlight, because everything else is frankly pretty mediocre on this card. Holy crap is it noisy.

This is a tough one. Hell I might put both of them in there eventually. The AWE32 is a vastly superior card in every aspect, but it’s several years newer than the rest of the hardware so far (the CT3670 was one of the last models released, built from AWE64 components). And so for now I’m going with the Logitech card, because it’s interesting and just freaking weird on a hardware level.

Not interesting but here it is anyway. 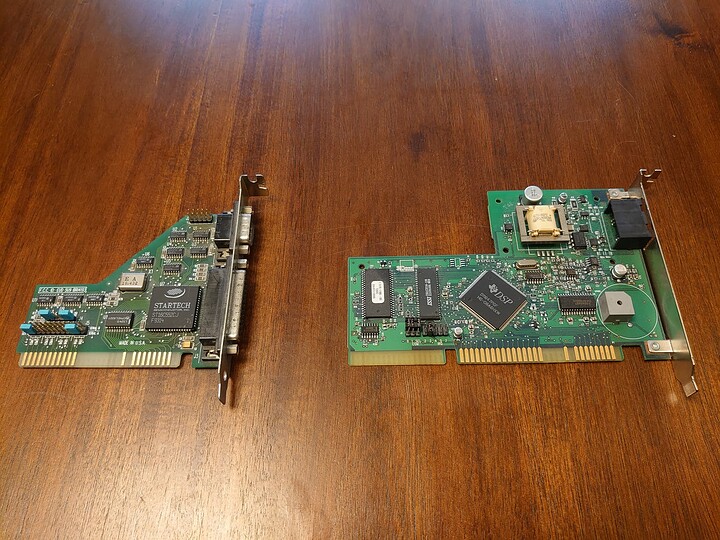 You’ll notice there’s no provision for a mouse yet. Here’s a serial port for a serial mouse, and parallel for nothing in particular.

Setting This Mess Up

It could be possible to repair that ziff socket, I’ve taken apart a am3 one before it was just clips keeping the top on

It’s essentially busted as is, so might be worth a shot, it’ll be no more busted if you break something

Yup, just tried. Isn’t built the same way as AM3 but it looks like there are clips along either side that hold the sliding top assembly onto the base. Unfortunately it seems like the socket is some kind of unreinforced nylon and is extremely brittle now… it’s just crumbling apart when I try to unhook those latches, so the socket is pretty much a writeoff. I could slap PGA socket on there, but the board itself is built pretty poorly so I’ll probably just stuff it in a bag and put it back in storage.

Assembly quality on the one I’m using is very nice, so I’m happy with it for now.

Just got the Fractal Define 7 cleaned out and ready for its new resident system. Gotta get some new standoffs punched in, and find some nylon ones for the rear edge of the board… a lot of old AT cases and boards were built to use these awful plastic spacers that slotted into the motherboard tray, and so there’s no keepout for an actual metallic standoff.

Fun fact: While it’s obsolete for the purposes of being a PC power connector, the Molex KK series of connector (AT P8/P9) is still active.

I’ve decided that before installing the motherboard, I’m going to pull the old AT power connectors off, and replace them with a terminal block.

If this board still functions ten years from now, I’ll never have to worry about being able to find the AT power cable mate.

I am using Molex MicroFit and KK in electronics projects a lot. Brilliant connectors and dirt cheap.