First post, so I may as well begin with the longest one I plan on writing.
Don't quote me on that though, I just might write an encyclopedia at some point.

This tale really begins in April 2011, when the Cooler Master V10 CPU cooler of my previous PC cracked the motherboard because I was too lazy to remove it before transport.

Seeing as socket 775 was aged and 1155 was relatively new, I started building a new PC mostly from scratch, only keeping the old PC's PSU and graphics card. All the rest, including the case, was new.
I went so overboard with LEDs and cathodes that the PC was quickly nicknamed "The Red Queen" 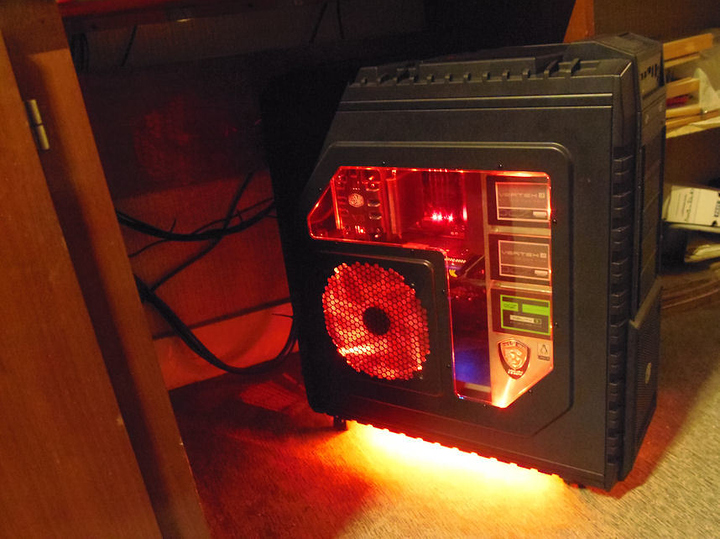 I decided to improve the airflow by removing the hard drive cage and putting the SSDs on display just behind the window.
Bad idea, apparently the HAF X's entire structural rigidity relies on that hard drive cage.

Oh well, on to the next case.

I didn't really come across anything I liked, including cases from boutique builders.
Nobody does airflow properly it seems, all cases have negative pressure if you cram them full of fans using the recommended airflow pattern. It looks like they only focus on water cooling.
Eventually I got me a windowed Cooler Master Storm Trooper. 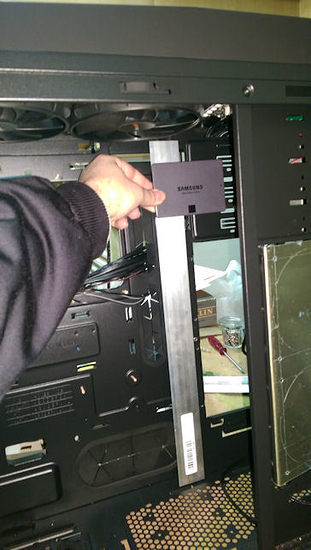 Figuring out how to mount the SSD drives. I had already decided to put 4 SSDs in whilst not using any of the regular hard drive cages. 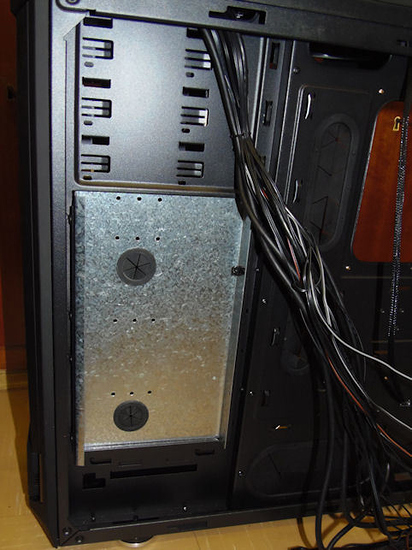 I used a random steel plate to close the hole left by the removal of the HDD cages and their mounting plates. In that plate I sawed holes (by hand with a coping saw) for the cables to go through and drilled small holes for zip ties to help with cable management.
The rubber grommets were on the back of the HAF X. I guess that makes me one of the few people that actually uses these for something.

Normally the Storm Trooper has 2 intake fans bolted onto a pair of triple-slot HDD racks. These can be positioned to have them drawing air in from the front or from the side.
There's also room for 2 intake fans in the bottom, but those 2 are useless really, limiting you to a realistic 2x 120mm intake. 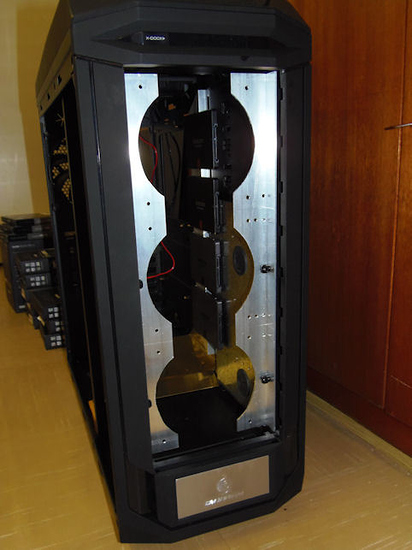 I wasn't having any of that, so I got a set of 20x40mm alu L-profiles and drilled holes etc to mount a trio of 120mm fans. 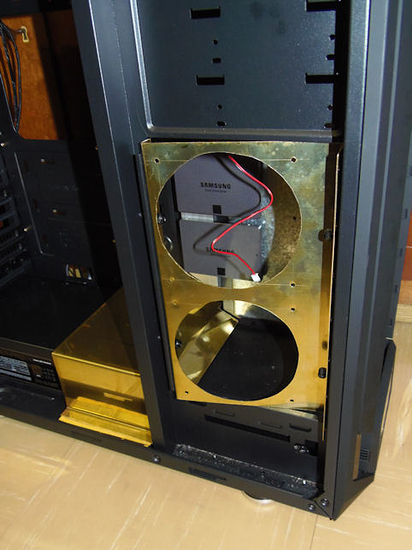 Seeing as the case has three 140mm fans for exhaust, the three 120mm intake fans wouldn't be enough to provide natural positive pressure. So I added 2 more intake fans in the side. For these I used a copper plate because copper is much easier to manipulate than alu, especially with what I had in mind.

You may see that this plate is at an angle. The rear of the fans is actually sticking out of the chassis.
No worries though, there's a reason for this madness. This angle allows it to sit perfectly behind the intake bulge in the side panel.
I know the circles aren't perfect, but it's done by hand with a coping saw, will be painted black and hidden from sight. 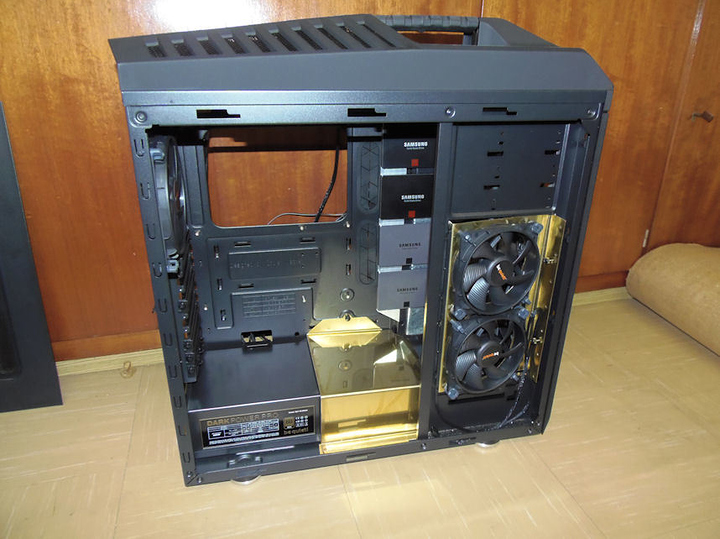 I didn't like the open space and exposed wiring in front of the PSU, so I made my own PSU cover.
At the top it has a screw hole right where one of the motherboard risers would go if you used an XL-ATX motherboard.
At the bottom it rests on felt feet to prevent resonance. It also doesn't touch any component or part of the case, also to prevent resonance. 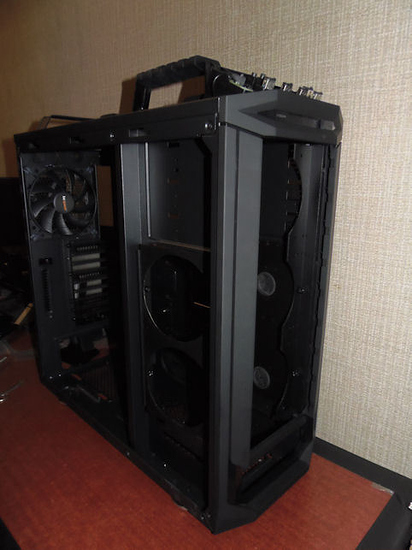 All custom parts were plasti-dipped using "camo black", which turned out to be an almost perfect match for the default paint.

There's nothing special about installing components, so I'll fast-forward to the finished product. 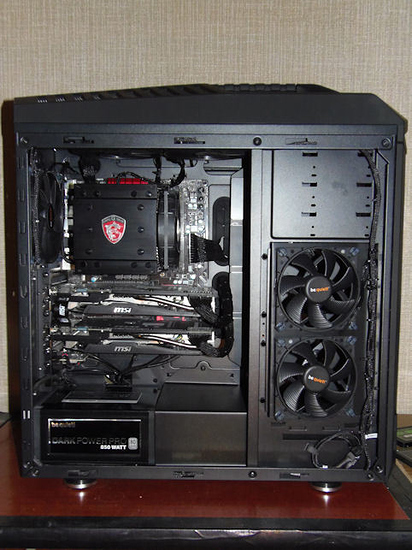 I'm still not too pleased about the angle on the 24-pin, maybe I'll sort that out later. It's long enough, but it just settled at that awkward angle on its own. Guess I'll have to force it up a bit on the other side of the motherboard tray.

As much as I like BeQuiet, the sideways logo on the cooler made my OCD explode. An MSI laptop badge sorted that out.

The motherboard has a display that shows the temperature. Great stuff ... except that the second graphics card blocks it entirely.
Oh well, it's not like I need to worry about overheating. 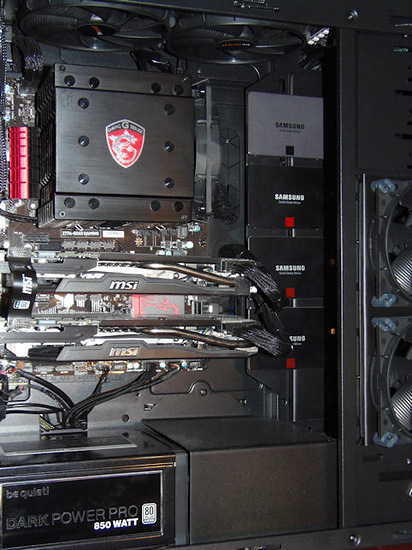 The SSDs. The top of the 840EVO is level with the top of the motherboard, the bottom of the lowest 850PRO is level with the bottom of the motherboard.
That was the idea from the very start, but with hindsight it was a bit pointless because the EVO is covered by the side panel. You can't see it unless watching at an upward angle.
Seeing as the PC is on the ground, that last bit is a rare occurrence.

It's a good thing really that the EVO is so hard to spot, otherwise I would have had to invest in a 1TB 850PRO to replace it.

Right before the top-front fan, you can see the LED breather kit. 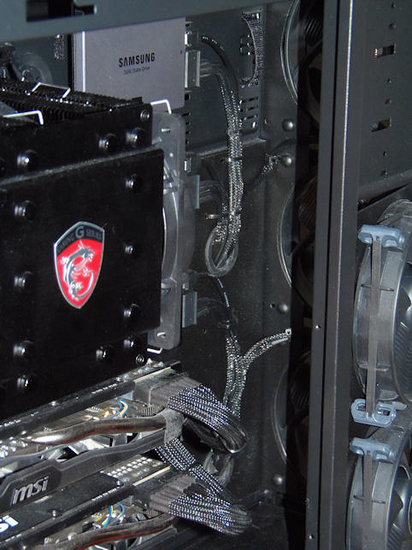 Cable management. There is absolutely nothing in this case that restricts airflow.
It should call it the "HAF Trooper". Then again when all those fans ramp up there's a little Storm going on inside the case, so the "Storm Trooper" name still somewhat fits. 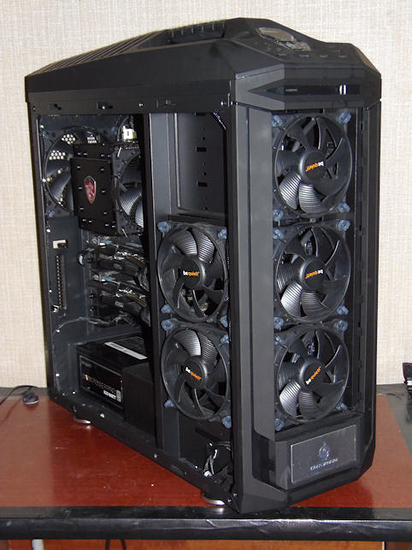 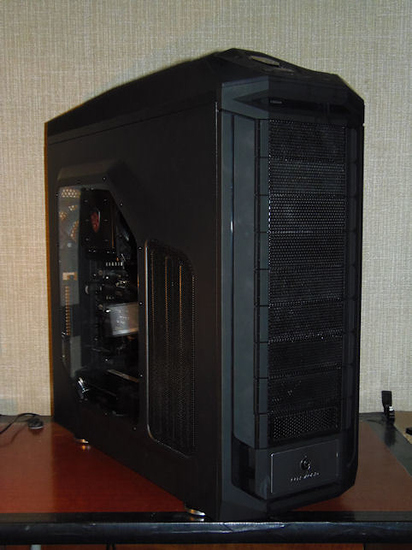 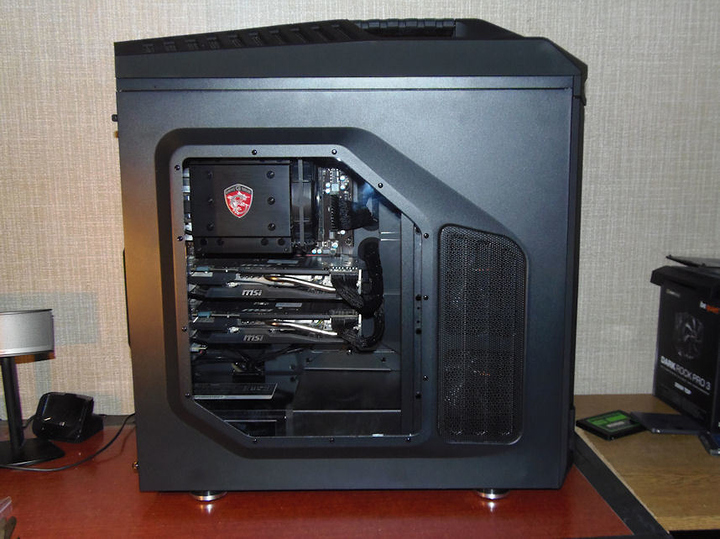 When you cover it up, you can't tell the amount of work that went into the mods. It looks like just another Storm Trooper. 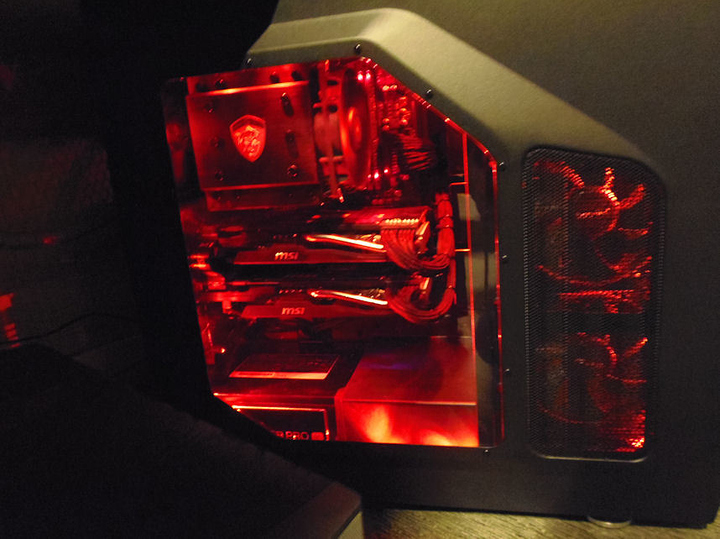 Lighting-wise, it has a breather kit and I salvaged the LED strip from the old case. It still has plenty of interior lighting if I want to light it up. No more underglow though, and no more LEDs in the fans.
Most of the time I have just the breather on. The strip completely overpowers it even at the lowest setting, so I rarely turn that on.

I decided to let the "Queen" moniker stick, but removed the "Red" bit. So this incarnation is simply "The Queen".

So many fans, they could do with some radiators to keep them company y'know. >.>
heuheuheuhe

That thing cant be THAT quiet is it? I mean you got enough fans to blow the thing off the desk /s

Never knew Elizabeth was into Battlefeild 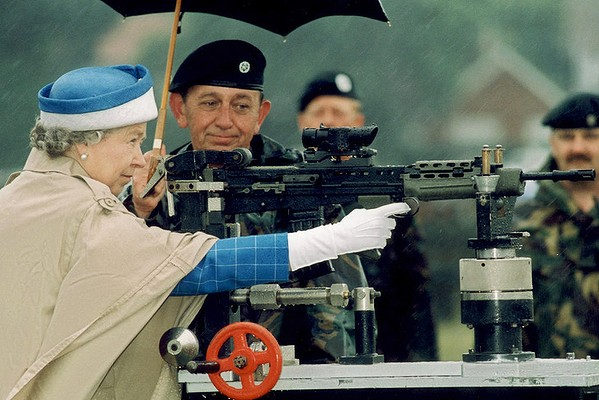 At idle the only fans I hear are those of the graphics cards, and even those are barely audible when the PC is sitting 3ft from you.
Under load the case fans ramp up and then there's quite a bit of wind noise indeed, but that is to be expected.

Thats as awsome as an air-cooled machine can get!