So my laptop is terrible right now and it's hard to game on also with my limited space.

So I wanted to build a cheap PC. So I waited for the Kaveri APU and I made a list on PCPartMaker and got it to $480.

I'd really like suggestions to improve performance or lower price.

Looks pretty good I recently had a Gigabyte board on the A88X platform that was terrible so I would suggest avoiding Gigabyte and getting one of these:

Plus all of those boards have 4 DIMM slots as opposed to the Gigabyte which has 2, so more RAM later on

Looks like a good APU build, though i would suggest getting a cheap CPU and a ok GPU, a bit like this:

The MoBo in this build is horrible though so have that in mind.

Okay, I might do that. I was wanting to do a APU based PC for the upgradablity later. But I guess this is the same price as mine. With a lot more performance. 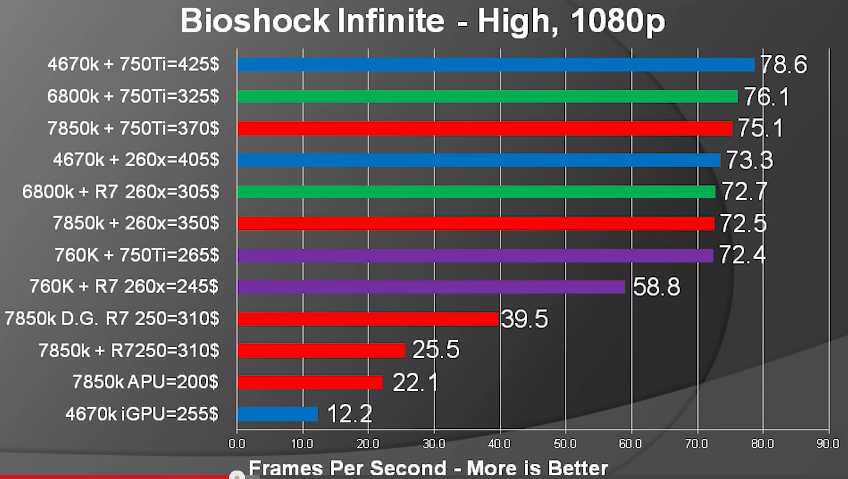 The reason I'm using the one I'm using now is because it's a combo with the APU, so I get $20 off. Also it's a pretty nice board from what I can tell... But I've seen lots of good things about Gigabyte, and I'd think this one will be fine. But I'll do more research on that.

Trust me, its not a good board. The BIOS is worthless and Gigabyte is notorious for having VRMs that randomly go pop and die. Gigabyte is not worth it at any price, IMO. My board suffered from the random VRM dying and it was their highest end board

It's actually $515.14 The GPU is $10 more, and the PSU is $20 more. But I just made a new part list using some of these suggestions. http://pcpartpicker.com/user/XxGamingTownxX/saved/41lJ

What are the differences in those?

2. Don't buy an FM2 motherboard, go with an FM2+ board. This will keep the door open for future CPU/APU upgrades down the road. The GPU cores in the newest APU's, moving forward, will not only be useful for gaming but performing other tasks much faster in the future. Just something to keep in mind. Also FM2+, in general, are newer better boards with a nicer set of features. You'll pay a little more for them, but it will be more worth it in the long run.

Mainly the difference is in the quality of the components used and the set of features each board comes with. A55 is lower-end/entry-level/less features. A75 is mid-range/better components/more features. Also keep in mind that within each chipset family, there can be a wide variation of features from board to board.

Okay, so I just updated the list. Is this good? http://pcpartpicker.com/user/XxGamingTownxX/saved/41lJ

A55 is old very old has no sata iii you will need a bios update for the 760k no usb 3.0 and limited ram support.

FM2+ cpu's have extra pins that whont fit on to FM2 cpu sockets.

Here's the same build but with a better FM2+ motherboard. (Don't buy an FM2 board, they have no upgrade path).

This A75 chipset board has 4 dimm (ram) slots so you can easily add more ram later on.

Yes, FM2+ is just a revision of FM2 for a new chip set. FM2+ is backwards compatible with FM2

Tell me if there's anything you think I should change. Thank you all for the suggestions and stuff.

Well you can save your self $10 on ram if you go for the kingston sticks but it dosent realy matter anless money is realy tight.